This question led me to a very interesting idea.

Is it possible to create a camouflage or pattern that when applied to military uniforms would distract the viewer, make him feel uncomfortable or even make him lose consciousness or simply prevent him from recognizing a human even though he would see the shape and contours of an enemy soldier? It would be a "Memetic agent" in SCP foundation terms, basically a picture or pattern which is harmful to the brain. If soldiers would wear uniforms with such a pattern or military vehicles would be painted accordingly, they would have the advantage of not even being aimed at by enemies. This would benefit them seriously, at least until the opposing faction develops automatic computer-based aiming systems or weapons. For simplicity's sake, let's consider that the soldiers who wear the uniforms are either immune, wear special goggles that neutralize the effects of the patterns or are trained to not look at each other.

There's nothing you can print on cloth that will cause a huge physical or psychological reaction in a person, except perhaps if you print a joke and make them lol.

There's no magic bullet to camouflage. I would have thought that the answers on the linked question outline the issue pretty well.

Camouflage, by definition is "the disguising of military personnel, equipment, and installations by painting or covering them to make them blend in with their surroundings." (the definition doesn't mention this, but breaking up outlines is a huge purpose of successful camouflage) Making things stand out as irritating to look at would defeat the purpose.

I'm also not entirely certain what sort of example of controlling people's free will through patterns printed on uniforms you were hoping to get.

While it is easy to extrapolate various forms of chameleon camouflage based on uniforms compered with LED's and cameras, or using metamaterials to refract light around the uniform or equipment in unnatural ways, what you are talking about is something different.

The closest example I could find are "Medusa Weapons", designed to fry the brains of anyone unfortunate enough to look at them. The theoretical basis of this is very thin indeed, and rests on the assumption that the human brain is limited in its responses to inputs, as well as the idea that everyone's brains will react in the same way to a stimulus. Even is we assume that is true, I could circumvent this by only recruiting autistic soldiers, or sociopaths, ro anyone who has an unusual mental or neurological profile which would not be triggered by the Medusa Weapon. 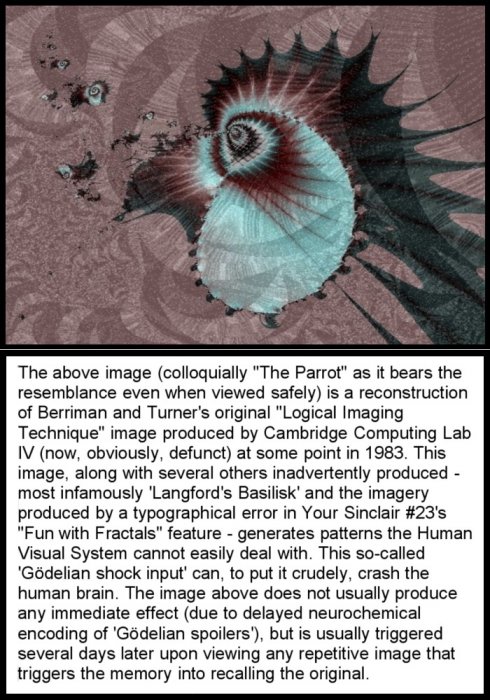 You also mention the fatal weakness to this technique in part two of your question: the desire to "crash" computerized sighting systems. The issue there is computers work in entirely different ways from the human brain, so what would theoretically work on a human will be ineffective against a computer and vice versa. The other aspect which you fail to address is most computerized sighting systems use much different inputs than human soldiers; target locks can be based on thermal imagery, infra red radiation, radar returns in a wide variety of bands, laser range finding, GPS coordinates, sound, vibrations from the ground, sonar and so on. You are going to look a bit silly painting your tank in a garish display when a laser guided weapon or millimetres wave radar seeking mortar round comes crashing into the vehicle.

The closest that any "real world" device could come to creating the effects you desire would be to emit a strobing light signal synchronized to human brain waves to trigger epileptic fits among people watching the display. While susceptible people could be triggered by the strobing lights, people who are not susceptible would have a marvellous aiming point and fire on the flashing lights with everything they had....

Modern digital camouflage patterns are good at making people and vehicles hard to notice at a distance. The CADPAT pattern seems to be particularly effective: a friend who was an RAF officer complained that the Canadian officer who was on an exchange tour at his base was hard to look at when he wore his camo in the officer's mess, which he did as much as possible. However, this isn't remotely as powerful as the effects you're looking for.

The best fictional treatment of patterns that affect the visual system and mind is David Langford's "basilisk" series of stories, staring with BLIT. They're collected in the book Different Kinds of Darkness, which I'd recommend you read if you want to work with this idea.

I concur with other answers that a pattern could not outright blind or disable an enemy combatant, only cause one to blend into the background. (Although I do have to admit that my roommate has a pair of sheets that makes me dizzy when I look at them). However one could use an active device to distract and blind their enemies.

Police lights are a good example of this, especially the newer super-bright LED ones. Although these could only work for distraction/blinding at night, unless you could make a light that is significantly brighter than the sun (I'll come back to this). At night bright colorful flashing lights that are brighter than police lights could be used to distract and blind (like looking into a flashlight at night). this could be compounded by multiple vehicles/devices (with forward facing lights only) such that it blinds anything in your field of view (with the side effect of also illuminating them.

During the day light, you could take advantage of the sun through glare and reflections (like when you're driving and an opposing windshield glares into your face). Except instead of just a windshield it could be like a discoball that is designed specifically to glare into peoples face. A device like this could however compromise a soldiers cover.

Armies, however already consider things like this. Since the days of the Greeks (at least) it has been known that it is advantageous to attack from the east in the morning and from the west after noon. This way, your soldiers are not facing the sun, but your opponents are facing into the sun and have to squint at it.

It's possible to track human eyes using IR lights, so conceivably you could have a IR flashlight on the end of you gun which paints the area you're pointing it at in (invisible to humans) IR light. If someone looks at you from within that cone of effect a camera on you gun with recognition software identifies their eyes by their IR eye-shine, then a shoulder mounted laser with a prism/mirror on a servo actuated gimbal directs an intense millisecond long laser into their eyes.

Thus anyone that looks at you while you're gun is pointing at them will almost immediately be blinded unless they're wearing protective eyewear, assuming they can anticipate the wavelength of the laser you're using. Eye like IR reflectors could also trick the software into wasting power, these fake eyes could even be electronic sensors that give away your position.

Not the answer you're looking for? Browse other questions tagged weapons psychology mind-control or ask your own question.

0
How to fight enemy you can't concentrate your eyesight on?

7
How to create a deadly "memetic virus"