Stability of terrestrial planets orbiting in the Lagrangian points of Jupiter sized planets?

Would it be possible for a terrestrial planet say atleast >0.3 Earth masses orbiting in the L3/L4/L5 and L1/L2 Lagrangian points of a Jupiter sized planet in the habitable zone of a Sun-like star remain stable for billions of years? Would this scenario be unlikely to occur naturally? And if it is stable what are some possible factors that might make it eventually become unstable?

The general rule of thumb is the objects in the Lagrangian points must be significantly less massive than the primaries in order to remain in place. 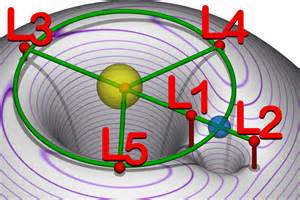 Objects in the L1, L2 and L3 positions are in an unstable environment, and gravitational perturbations will rapidly destabilize them, causing objects to drift away. Semi permanent orbits "around" the L points are possible in these locations, but even there they will be relatively unstable, and require some sort of long term station keeping in order to remain in place.

The L4 and L5 points are much more stable (although realistically, they too are metastable, and objects placed there will be drifting in an orbit around the L points), and an object placed there should remain stable for geological ages.

You should also consider the actual scale of what you are proposing. Objects in the L4 and L5 points are 60 degrees ahead of or behind the orbit of the primary, so an object at the L points in Earth's orbit will be incredibly difficult and time consuming to get to. The Jovian Trojans would take years to reach launching from Jupiter space using any current or near term technology, Getting to the Earth Sun L4 or L5 point will be somewhat easier, but still an arduous journey unless you have some pretty advanced spaceflight technology.

There are indeed natural objects (called Trojans) captured in Jupiter's L4 and L5 bands. One gotcha is that for planets the size of Jupiter to form at all, they must be out of the habitable zone. Closer to the habitable zone (our side of the Asteroid Belt) causes dense rocky planets to form, but the solar winds that close to the Sun blow away the massive clouds of dust and gas that compose Jupiter and all of the gaseous planets. (Parenthetically, this formation pattern is why many don't consider Pluto a planet. It's more likely a captured foreign object.)

According to Wikipedia article on Lagrangian points:

L3 in the Sun–Earth system exists on the opposite side of the Sun, a little outside Earth's orbit but slightly closer to the Sun than Earth is. (This apparent contradiction is because the Sun is also affected by Earth's gravity, and so orbits around the two bodies' barycenter, which is, however, well inside the body of the Sun.) At the L3 point, the combined pull of Earth and Sun again causes the object to orbit with the same period as Earth.

So an L3 planet would actually just have roughly the same orbit as the Jupiter-sized planet (which, to me, doesn't seem like it would be orbiting the planet at all, in the way you normally think of orbiting). Wikipedia also states that objects in L1 - L3 do eventually fall out of orbit, and I doubt they would stay there for billions of years before doing so. If you aren't tied to billions of years, that's a convenient way to explain it falling out of orbit - station keeping, i.e. orbital maneuvers with rockets, can be used to keep objects in the L3 orbit artificially, but eventually maybe you run out of antimatter fuel or a natural disaster occurs to damage your equipment? The planet still wouldn't be in the habitable zone, but if you went with this scheme, you may as well change it to be in the L3 range of an Earth-like planet.

One problem is, no matter what destabilizes the orbit, it probably wouldn't have disastrous consequences during the span of one person's life. The climate would very slowly change over several generations as the planet drifts further and further away.

So all in all, it is not likely for that exact scenario to occur naturally. Objects in L3 orbit slowly fall out, and wouldn't naturally stay over billions of years. Even given an L4 orbit, Jupiter-sized planets are not likely to be in the habitable zone.

If you are willing to sacrifice those types of orbits and the habitable zone, consider a world like this:

Jupiter's moon Io is the most volcanically active body in the solar system, making its surface uncharacteristically hot for where it is. The tidal forces that Jupiter and Europa enact on it cause the activity.

Although Io is a harsh and toxic environment (with all the sulfur and volcanoes and whatnot), you could entertain a scenario with milder heating, making it warm enough to be have liquid water. Given the lack of sunlight, perhaps the creatures on the planet evolved to use chemosynthesis, like some of the animals that live near sulfur vents on the ocean floor? Who says that the "habitable zone" is the only place that can support life? This is where the fiction in Science Fiction comes in, and where it gets fun :)

Not the answer you're looking for? Browse other questions tagged orbital-mechanics habitability .

21
Is a Jupiter-sized planet plausible in a habitable zone?
40
Habitable moon of a gas giant: working out the sizes and distances
5
Can this planetary system remain stable?
3
Maximum amount of habitable moons possible around this Jovian planet?
5
How many Mars sized planets can form and remain stable in the habitable zone of a Sun-like star?
13
What is the theoretical maximum number of habitable planets in one solar system?
2
The major effects on the habitability of exomoons orbiting this Brown Dwarf
2
Habitable Planet in the L2 Lagrange Point of a Hot Jupiter
8
Is it possible to have earth like planets in Jupiter lagrange points?