About how many planets are plausible for this binary-star system?

I have a binary system in which my world orbits one of the stars, not the pair, in the habitable zone. The stars are relatively close together (because I want the secondary one to shed significant light on the planet too), tentatively about 20AU apart with the secondary star in a small nebula. (I'm still open to other ways to solve my lighting problem; see the linked question.) The primary star is F- or G-class and the secondary is, tentatively, K-class.

I'd like to get an idea of how many other planets might be in this system and how they could reasonably be distributed. Might I see a mix of planets orbiting single stars and ones orbiting the pair? Would there plausibly be planets orbiting both stars or just one? Would that be different if the stars were farther apart, say 100AU?

And what about number? NASA has identified nearly 600 multi-planetary systems so far. In about half they have found two planets, in about a sixth they have found three, and it drops off from there. Our own solar system has the highest known planet count so far. Of course, there could be planets that NASA just hasn't found yet -- or eight planets for a single system might be really unusual. But, as best I can tell, none of the systems catalogued by NASA are multi-star systems, so even if we postulate that "about three" is the right number for a random system, we don't know if that extends to binary-star systems.

Let’s start with the easiest of your questions:

Are any multi-planetary binary-star systems known?

There are, in fact, quite a few:

As you can tell, there’s a mix of planets in P-type orbits (circumbinary) and S-type orbits (around just one star). The planets in S-type orbits seem to orbit close to the primary. It could be argued that this is an observational artifact; after all, it’s much easier to detect giant planets close to their parent star, using transit and radial velocity methods. I would guess that this plays a role in the lopsided data we have, just as it plays a role in the distribution of all the exoplanets we know of.1

However, there is another factor. Planets in S-type orbits do have a maximum semi-major axis, as first explored by Graziani & Black (1981). This distance is accepted to be about one-fifth of the separation between the stars. Likewise, for planets in P-type orbits, there is a zone of (according to the above page) one third to 3.5 times the separation in which stable orbits are not possible (see e.g. Donnison & Mikulskis (1991)), though Wikipedia cites the more recent Welsh et al. (2013) in extending the innermost stable orbits to 2-4 time the stellar separation.

These are some basic ranges; Hypnosifl also suggested Holman & Wiegert (1998), who studied the long-term stability of both S-type and P-type orbits, allowing for non-zero values for the eccentricity $e$ of the orbits of the stars. Thus, their empirical formulae (with coefficients derived using least-squares techniques) may be more accurate than models which assume that $e=0$. I’d highly recommend consulting them if you want to do some basic calculations for your stellar/planetary system.

Additionally, like Holman & Wiegert, they discuss the impact of stellar eccentricity on the boundaries of stable orbits.

The authors look at the cases of three specific stellar systems and try to define whether or not a planet can orbit stably inside the habitable zone(s). Take, for instance, the case of HIP 80346:

Now that we seem to have looked at the limits of orbits, let’s take a look at what you’re actually likely to find in a binary star system. Quintana & Lissauer (2007) is a good start, in terms of terrestrial planet formation. Here’s a quick summary:

Here’s Figure 1, the results of some of the simulations for planets around Alpha Centauri: 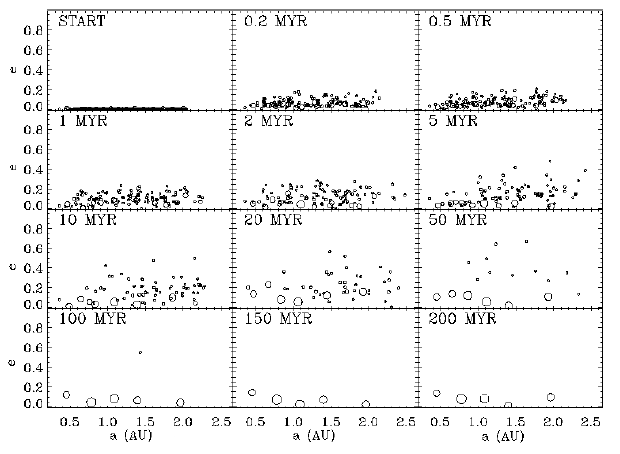 Here’s Figure 2, the results of some of the simulations in the same conditions but with that tiny change in the orbit of one of the planetesimals: 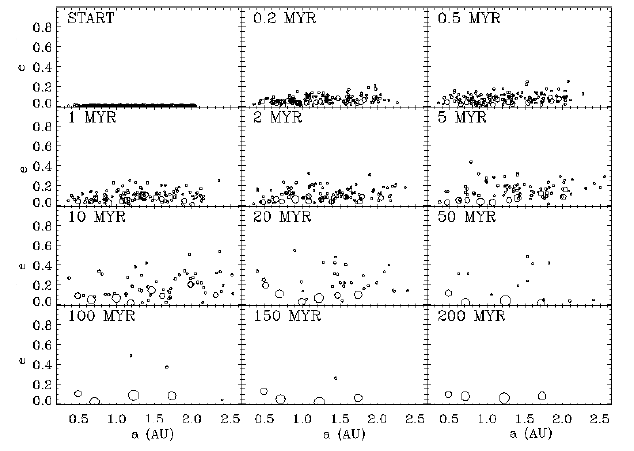 I’d also like to mention Bromley & Kenyon (2015), who attacked the problem analytically. If you’re into expanding potentials using Fourier series, be my guest and read it through. In this case, I, however, prefer to look at what overall trends from the simulations tell us.

1 However, this is decidedly not the case for planets in P-type orbits. As demonstrated by Pierens & Nelson (2008), circumbinary planets with mass greater than that of Jupiter are likely to encounter instabilities during formation and will either be ejected or will migrate drastically, possibly ending up orbiting just one of the stars. That said, as noted in Quintana & Lissauer (2007), which I’ll discuss later, no terrestrial-mass planets have been detected so far in P-type orbits.
2 Keep in mind that the early reports of one or more planets in the system turned out to be incorrect; these are hypothetical planets.
3 Note that it's not impossible for both stars in the system to have protoplanetary disks, leading to planets in S-type orbits around each star.
4 μ is calculated as $$\mu=\frac{M_C}{M_C+M_*}$$ where M* is the mass of the star around which planets formed and MC is the mass of the companion.

A simple way to think about this problem is simply in terms of which planetary orbits are stable in a given binary star system.

Let's talk about S-type orbits, where a planet's orbit around its star is smaller than the mutual orbit of the two stars. There is an outer edge of stability: planet orbits that are wider than a certain distance are unstable. That distance is directly linked to the closest approach between the two stars, Rmin. The ballpark number is generally 1/3: orbits start to be stable at about 1/3 of Rmin. So, if the two stars' closest approach is 30 AU, planetary orbits are stable out to about 10 AU. This is not a really firm number, because it depends to some degree on things like the stars' masses, how eccentric the stars' orbit is, and how inclined the stars' orbit is relative to the plane of the planets. But it's a good ballpark number.

So, for your case of a binary separated by 20 AU, you could plausibly have planets orbiting both stars out to, say, 6-7 AU. If you want to be conservative put the edge at 5 AU. If the stars have different masses, then the more massive star can have planets farther out. If the binary orbit is eccentric, say with e=0.5, then the closest approach distance would be 20 AU * (1 - e) = 10 AU, so the outer edge for stable orbits would be at around 3 AU.

Of course, you can pack as many planets as you want interior to that radius (see here for example: https://planetplanet.net/2014/05/21/building-the-ultimate-solar-system-part-3-choosing-the-planets-orbits/).

You could also have planets orbiting exterior to the two stars, on P-type orbits. The ballpark criterion for planets on P-type orbits is that the inner edge of stability is at least 2 times the maximum separation of the two stars. So, for the case of your binary separated by 20 AU, you could have planets orbiting past ~40 AU (or, to be conservative, past ~50 AU). If your binary has an eccentricity of 0.5, then the farthest separation of the two stars would be 20 AU * (1 + e) = 30 AU, so you could have planets anywhere past 60-ish AU. Again, there are lots of details but this is the simple ballpark way to think about it.

And FYI see here for a summary of the effect of binary stars on planets: https://planetplanet.net/2013/06/06/binary-stars-friends-or-foes/

This figure shows the punchline: 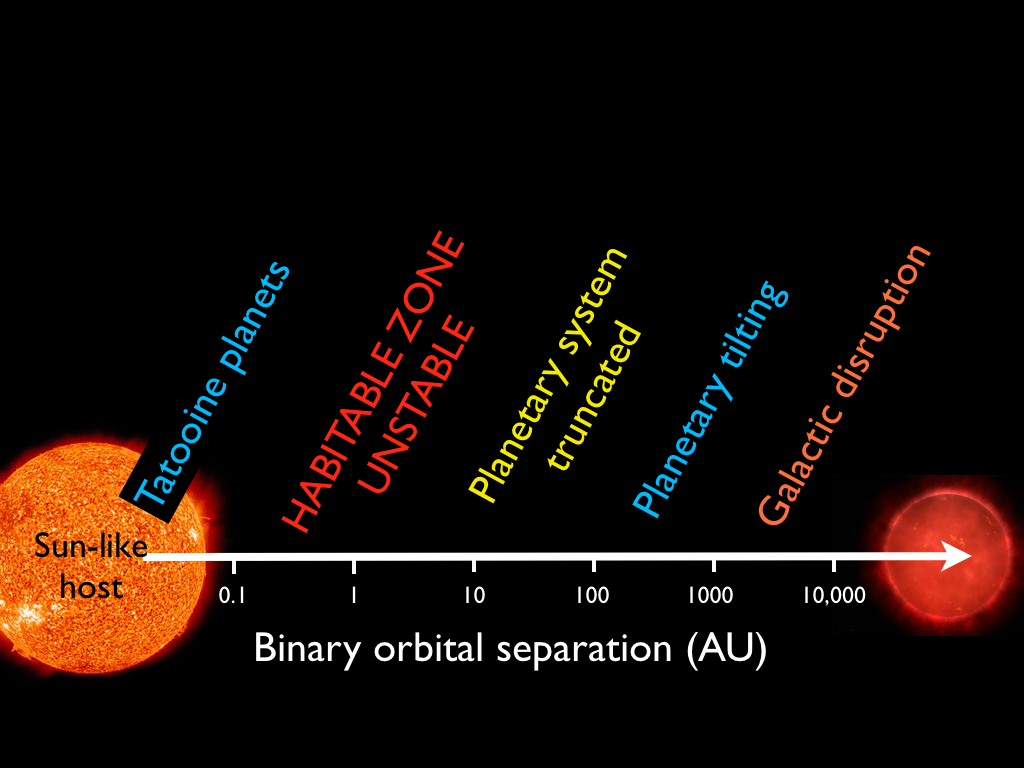 Regarding distances between the stars, and the the light shed upon planets, the Alpha Centauri system is pretty close to the requirements that you want. Here is some useful information summarized from the wikipedia page about Alpha Centauri, View from a hypothetical planet

46
How do seasons work in a binary system (planet orbits one star, not both)?
19
How can I safely brighten my secondary star?
10
Could a star hold up to 16 planets?
7
How can a planet orbit two or more stars simultaneously?
-2
What are the consequences of completely banning fire and burning stuff?

15
Orbiting one star in a binary system: what are the effects of the second star on the planet?
19
How can I safely brighten my secondary star?
46
How do seasons work in a binary system (planet orbits one star, not both)?
15
What would this nebula look like from a planet?
5
How would a colliding binary affect its planetary system?
9
How far should second star be in my binary system?
6
How would I make my Quintuple Star System Stable?
4
Could a double binary system support planets?
8
How do I determine the habitable zone of a binary star system?