Building a planet favorable to the evolution of intelligent life

You are a planetary engineer from a lonely species fairly high on the Kardashev scale. Although your species has wandered throughout the galaxy seeking out new life and civilizations for thousands of years, you have discovered that although life can be found on almost any planet with liquid water, intelligent life is extremely rare, often taking several billion years after a planet's formation to develop by lucky accident, when it develops at all, and prone to going extinct long before you get a chance to find it.

Your mission is to design a planet (or several) that specifically favors the evolution of intelligence. After creating the planet, and allowing it to cool off and develop single-celled life, you will go on a long journey at near-light speeds for a billion years or so. When you return, you want there to be a fairly good chance of finding an intelligent species (or several!) living there - even if one intelligent species goes extinct, you want the planet to be so favorable toward the development of intelligent life that it is likely to appear multiple times, improving the chance of finding one waiting for you.

You do not want to contaminate the planet with the specific values of your own civilization (you are looking for a friendly alien species, not an engineered child-species) so you will not use robots or any intelligent machines to guide their evolution. You should also make the planet look as natural as possible, so that the intelligent life that develops doesn't realize their planet was engineered - no obvious puzzles, monoliths, or mechanical subterranean engines lying around, unless they are something that could reasonably be expected to appear naturally. Beyond that, you can do whatever you want with the planet's size, composition, atmosphere, rotation, (natural) satellites, or position in space.

Intelligent Life how do these guys define it?

Being intelligent can have a lot of different meanings. It depends on what the Engineer (The person who wishes to create the planet) defines it as. For the sake of simplicity I assume that the engineer defines intelligence as:

This is the stuff the Engineer looks forward in his species and now starts to think what kind of a planet he would need. And next.

Lets start with life. We will add intelligent later

What makes life evolve on a planet. Only the presence of water is not enough to ensure life. One needs a lot of things. If the Engineer belongs to a Kadarshev type III (or possibly higher) civilization he (Probably) has seen a lot of planets and knows what kind of a planet is necessary for life. Though life across the universe is different it needs some basic features that is

This is pretty much I think one should look out for evolution of life but if it is the engineer's first try he would definitely try something like his own home planet's past composition. Also if he is allowed to sow the seeds of life. he may even give it a boost by putting in some bacterium and plant life. but strictly nothing remotely intelligent.

We got the life. What about intelligent

Intelligence as you might know might have evolved many times on this planet. Also the Engineer is aware of how life including intelligent one(s). has evolved on his planet. But note The first time intelligence arises it is fairly slow. For instance the first nearly intelligent life I think if you could call it that were dromaeosaurus. Scientific evidence suggests that dromaeosaurus could plan communicate and execute the plan. That puts them very close to being intelligent but they took like a lot of time to evolve on this planet. Sadly (or fortunately for us) a big rock wiped those silly little dinos of the map so that mammals could come in and colonize the rock they now called earth. But this time intelligent life took exponentially less time to evolve. just 65 million earth years.

So whatever your Engineer Guy the first time intelligent life evolves it is not going to be fast and once the planets ecosystem is up and running the Engineer guy should let it play out on its own. Because interrupting with your seemingly godly powers into a world filled with chaos and randomness is not a good idea. Also as far my thinking goes. once the Engineer has set the seeds of life he must not intervene much. unless his intervention is to save the planet from utter destruction. Because the Engineer wants life in all its myriad colors it is expected that he is patient and allows the drama to unfold in its own time so that true life continues evolving on his created planet

Several Intelligent species on one planet.

Intelligent species are competitive. They once evolve would be very quick to use their intelligence to their advantage. They probably would be able to learn who is their competitor and if they ever found out that there is another species evolving on their own planet they would probably go to war and even if they manage to settle the things diplomatically their stability is not going to last.

think of the factions this world has gotten split into just because of beliefs and ideologies. Now think what might happen on a world where there are 2 or possibly more intelligent competitive species. It is possibly not going to be pretty

Brilliant Idea. Due to these species being spread over planets These species wont be able to discover each others existence until they developed at least Radio wave or satellite technology. and if they have done so they definitely have a diplomatically and politically stable situation on their planet and are diplomatically and politically sensible enough to handle such experiences like meeting other worlders. This is probably one the things the engineer might go for. In order to come up with several intelligent life forms

Start by building a super habitable planet because this will maximize the conditions for life and evolution. If anything is going to increase the probability of intelligence, then a super habitable planet will be the first requirement. This won't of itself guarantee the rise of intelligence (in absolute sense), but it will increase its probability. 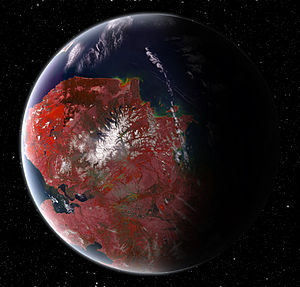 A super habitable planet have the following characteristics:

Radius: to maintain a similar Earth density, its radius should be between 1.2 and 1.3R⊕.

Oceans: percentage of surface area covered by oceans should be Earth-like, but more distributed without large continuous land masses.

Distance: shorter distance from the center of the habitable zone of the system than Earth.

Star and age: belonging to an intermediate K-type star with an older age than the Sun (4.5 billion years) but younger than 7 billion years.

Atmosphere: somewhat denser than Earth's and with a higher concentration of oxygen.

To accelerate life on a created super habitable planet, add some basic forms of unicellular life. A dash of guided panspermia will ensure life gets started.

The punctuated version of evolution indicates that if your aliens wanted to increase the probability of intelligence they should visit the planet with localized mass extinction events. Localized mass extinction doesn't mean wiping out all life in the ground zero of these events, but they should be just enough to wipe the slate clean and allow organisms to recolonise these disaster zones and encourage organisms to adapt themselves to new niches and diversify across ecosystems.

Dropping the occasional space rock on this continent or that, or in an ocean or two for time to time. Triggering large amounts of volcanic activity. Working behind the scenes and increase the amount of continent drift because this will shake up the state of biogeography. Together these factors accelerate the rise of new species, and this should also help the evolution of new genera and orders.

All these suggestions do is suggest ways to maximize life on a planet and hopefully this will maximize the evolution of intelligence too.

Not the answer you're looking for? Browse other questions tagged planets evolution intelligence .

4
How different would have brained animals evolved if there were mirrors everywhere in nature?

8
Red giant Habitable zone
111
Would intelligent life evolve any other body plan than humanoid?
6
Beak to teeth reverse evolution - how would the transitional forms be?
20
Physiological adaptation of life on a planet orbiting a red giant.
3
Plausibility of another extremely intelligent species evolving who finds the remains of our existence and emulates our society
7
What is the largest dragon that could take off without destroying the planet?
1
Would evolution come to a standstill on an ancient planet with (near-)zero radiation?
4
Could you detect extrasolar intelligence using a non radio-telescope or other instrument?