How would a self-propagating explosion like in the 1994 Independence day work?

In the 1996 movie Independence day, the Harvesters (aliens) had a devastating city-buster weapon:

This weapon, when fired upon a building from straight above, would make the building explode into a massive firestorm, and any other buildings hit by the firestorm would also be reduced to a skeleton by the blast.

Now, in the movie, there are tons of buildings that weren't completely destroyed. For example, in New York, the World Trade Center miraculously survived for the most part, and a number of surrounding buildings had large segments remaining as well. This doesn't quite cope with reality, so for the purposes of this question, just assume that everything on the path is reduced to a pile of rubble.

This weapon seems impossible in regards to the damage it does through a single shot. Is there a scientifically plausible way you can have a single shot from an energy weapon like in the movie level an entire city in a similar manner to the movie scene without violating conservation of energy?

Physically, there's no problem with having that amount of energy concentrated in a small area. We do it with nuclear weapons, as other answers have pointed out. Now, when a nuclear weapon explodes, the nuclear reaction itself takes something on the order of microseconds. After that time, the explosion is just an expanding ball of hot plasma. So it's relatively believable that the aliens could have some sort of plasma jet weapon, perhaps, which could create an equivalent ball of plasma without needing a nuclear bomb to get it started. The aftermath would be pretty much the same as a nuclear weapon's explosion: you'd get more or less the same shockwave, the same mushroom cloud, the same intense heat near ground zero, and so on.

Of course, that's not what happened in the movie. The destructive force from the aliens' weapon spread out along the ground, not in a spherical shell as would happen from a nuclear bomb. 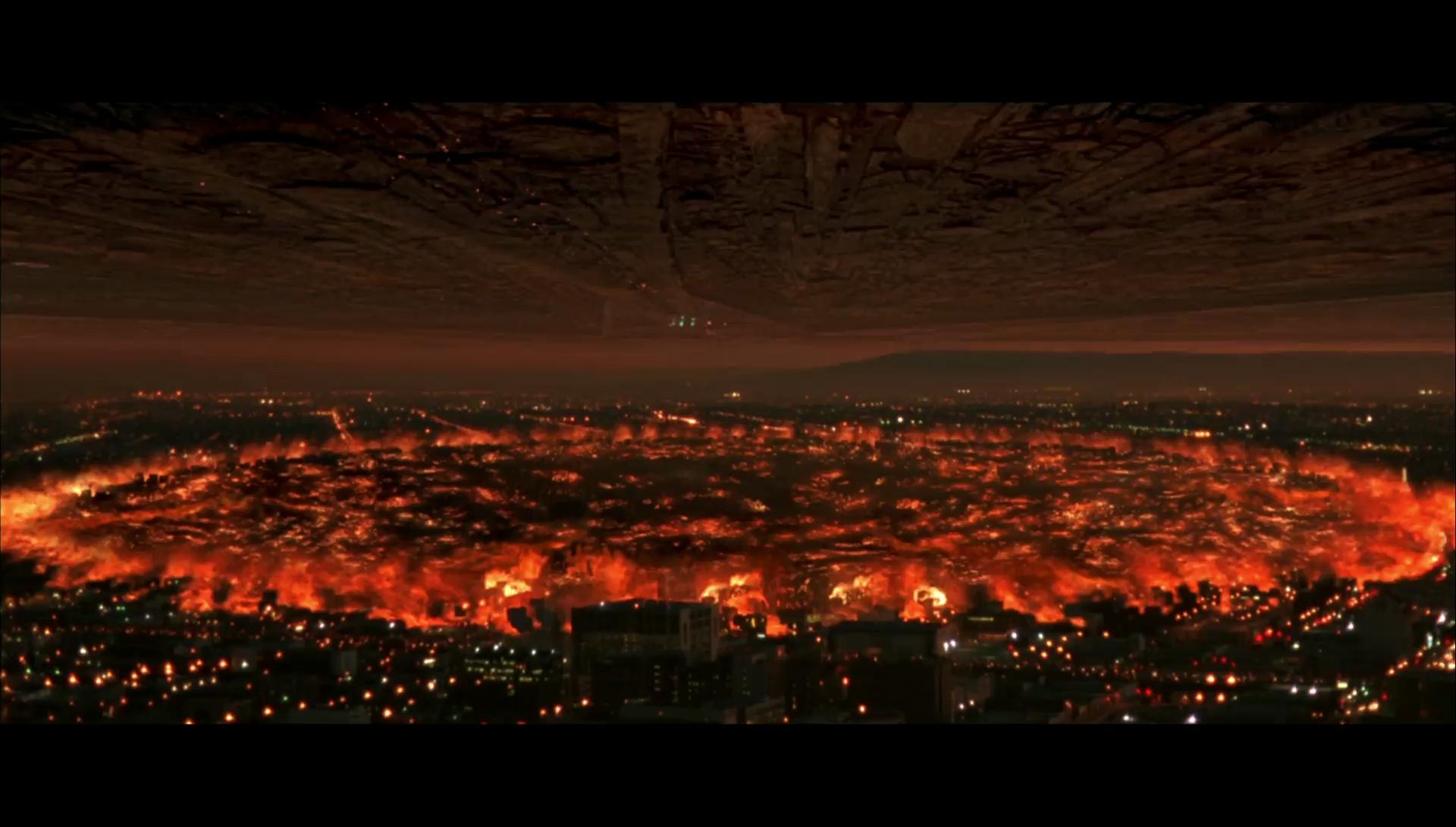 screenshot from the film

This may have something to do with the fact that the initial plasma jet from the aliens' weapon is a tall, thin cylinder, rather than a small sphere as a nuclear bomb would be. That would tend to push the explosive force horizontally outward at first. (This may also explain why they prefer to shoot into tall buildings... though why not go for the Washington Monument?) But once the fireball expands to larger the height of the cylinder, it won't really matter what its initial shape was; it will continue to expand in all directions equally.

This, I think, is the most difficult thing for real science to explain. Explosions don't choose directions unless forced to do so. (citation: rockets) So the aliens' technology must be doing something to alter the dynamics of the explosion. I can think of two obvious possibilities:

1There do exist chemical reactions that release energy but don't occur spontaneously, usually because they require a small input of energy or a catalyst to get started. But you're not going to get these from building materials. They occur in combustible or explosive substances.

A nanotech catlyst built to consume typical building materials. Remember they have beamed power, so the bots can continue destroying as they are flung onto other structures until they break down or go too long without finding the right mix of elements to disassemble.

The explosion is just the heat and expanding gasses of the disassembled material, which is just what fire is only it affects the materiqls it is designed for rather than requiring natural flamability. The destruction consumes energy, which is beamed to the nanobots.

This does not seem difficult. Imagine if the weapon was just superheating a spot. This causes anything that is a gas to expand and explode. The gas is also super-hot and will cause other gases to expand nearby. Also, if there is anything flammable nearby, these materials would also add to the heat and continue the chain. The reaction would continue until there is no more gas or fuel or the temperature drops to a certain critical level.

Another example is the fire bombing in Dresden where the heat of the fire itself caused more fires and even depleted the oxygen in several square miles. Some people died of suffocation long before they were burned.

Finally, during the fire after the airplanes hit the world trade center in 2001, nearby building would also start burning. Granted, this was a slow chain reaction that took hours instead of seconds, but rust is just an extremely slow burning fire.

Just like in the movie, after the Japanese cities were bomb, some buildings miraculously remained standing. The theory is that they were in a blast shadow where something diverted or absorbed the energy preventing the building from being knocked down.

Spray the buildings across the city with something flammable first (most likely a liquid, possibly a heavy flammable gas). That will handle David Z's point that "cities do not spontaneously explode".

Once the center of the area is ignited, the fire / explosions should travel outward like the Independence Day explosion.

Note that in Independence Day, the ship hovering over the city has a diameter of several miles. It could cover all of San Francisco with flammable liquid simultaneously.

It could be that there is no chain reaction, or blast wave--the weapon is actually just firing continuously, shooting a cone/circle of destruction instead of a beam/point of destruction. As to why the initial beam is visible, but the cone is not, well, maybe the visible beam is incidental "start-up exhaust", which doesn't actually destroy anything.

[Disclaimer: Probably not very well thought out] Antimatter. Use spectrographic analysis (can be done from a distance) to determine the most common building components in the target area, and create a beam of antiparticles that directly oppose those common particles. I'm not a materials science expert, but I'm certain there can be certain elements that appear in large quantities in the buildings we use, but not in the air around them.

As I understand it, antiparticles react only to their opposites, not other, unrelated particles. Now, rebar is in almost everything we build in modern day. Rebar is primarily iron, and there's very little iron in the atmosphere around the city. So anti-iron would not react to the air, and as the initial shockwave from the first exploding building sent the remaining anti-iron out, it'd continue to react at ground level. It will not continue to make more, so the initial beam had to contain all of the anti-iron intended for the target city.

A beam of very high-energy particles (aka cosmic rays), just behind a more conventional fragmentation bomb. The energetic particles would start a ionization cascade, thus more explosions nearby.

Not the answer you're looking for? Browse other questions tagged science-based warfare aliens weapon-mass-destruction or ask your own question.

28
How would interstellar internet work?
1
How would sleep cycles work in a world with a years-long day?
8
How would the inhabitants of one planet kill the inhabitants of the other?
6
how would the carnivorous grassland work?
5
Escaping the Snakebot of Doom
9
Would this "self driving" car work?
1
How could the most destructive spell work in my Barrier Magic?
3
How could the display technology of self-rewriting books work?