Is there any advantage to a heavy thrusting weapon?

I'm making a fantasy weapon, a spear with a thick, heavy tip.

I know that for a mace or sword that you slam down on your enemy, the weapon being heavier will give you more force, which is good for fighting armored opponents.

For a weapon that you thrust with, like a spear, does this extra heaviness on the tip help? What kind of battle is it best for, and what kind of user is most helped by it?

Furthermore, is there any historical version of this kind of weapon I could look at?

Edit: I imagined this weapon to be used to break infantry lines with shields, like a handheld battering ram perhaps, although I'm open to having it cut as well. The line-breaker aspect is my main focus though.

Edit: After having looked over all the answers I've decided to look over an alternate design with more versatility, and try to work the heavy aspect into it so it's more useful.

A heavy pole-arm used by infantry would be a sarissa.

It was an incredible 5 meters long and weighted about 6 kg. It had a sharp iron head shaped like a leaf and a balancing bronze butt-spike that would allow it to be anchored to the ground to stop charges by enemy soldiers.

It was an effective weapon, Alexander the Great conquered the known world with his Macedonian phalanxes using the sarissa.

Strong point was that all of the first three rows in the phalanx had the reach to engage the enemy.

Weak points were the sarissa's tactical unwieldiness and the enormous amount of training required for it to become effective in battle. Lack of supporting units to protect from flank attacks and lack of training limited the use and in the end smaller weapons like the Roman pilum (javelin) and gladius (sword) replaced it.

I'm coming from a Historic European Martial Arts (HEMA) perspective, with a dash of physics, and therefore consider myself only a minor authority in this topic.

Heavy weapons actually don't help you that much; as a person, you're going to put about the same energy into something no matter what. (This is just because your muscles can only give out so much power, and over the course of the swing you only have so much energy you can impart to your weapon.) Heaviness also helps prevent weapons from being deflected, which is a common occurrence. (This is where video-games get it wrong; your main defense with a weapon is the weapon itself!)

What does alter the use of a weapon has is it's weighting; swords which have their center of balance far from the hilt tend to be specialized in cutting, whereas those with the balance closer to the hilt tend to be for thrusting. This applies to most weapon in general; maces and axes are great for swinging around, not so much for thrusting. (You can still thrust with them, though, but with less efficacy.)

Your weapon, however, is a spear-like polearm (or staff weapon). This means you have some advantages:

Well, a really strong person may as well try to use this on foot. Goliath and Ajax were both described as using very heavy spears, which made them more intimidating. Mounted individuals, who use the horse to accelerate their weapon, would really enjoy this, but then it's just a lance. Throwing this would be very hard, as it's much heavier, and you wouldn't get the distance you would otherwise enjoy from a thrown weapon.

Since this is a fantasy weapon, you may want to consider what problem you are trying to solve with this. What is the weapon for? Why is this a better weapons than others? Is there an easier solution?

You're talking about a lance.

Traditionally speaking, they were used from horseback and were too heavy to use on foot.

However, if you're designing a spear for footmen, a heavier tip would still be fine. People don't ONLY thrust with spears - they whack things with them too. So why wouldn't having a heavier tip help with that regard? Sure, the balance would be thrown off a bit but I don't see why you can't use it with proper training.

In your case, the extra weight on the tip would help if you're trying to hit someone over the head with the blade, but if you're thrusting with your arms it would just tire you out more. Instead, you could adopt the lance approach and sit on a horse. Since force is mass * acceleration, having the heavier tipped spear on a horse would help you to do more damage as a thrusting weapon, but then you have to ask yourself - why not just use a lance?

A heavy thrusting weapon by itself really does not provide the ability to punch through shield walls as you seem to imply, and is quite limited otherwise.

The key issue is that foot soldiers have very limited strength, and will tire quickly in physical combat. The amount of mass that a soldier can carry and manipulate is (generally) limited to @1/3 of a soldier's body weight. The other issue is the amount of space needed to wield the weapon. If you are going to try and knock over an enemy soldier, you either need a "swing" to generate some momentum (in your case, only a straight "fore and aft" motion), or the ability to charge to impart your own momentum to the weapon. Even if your army is built like NFL running backs, you will discover it is rather difficult to bring down a man who is resisting you (especially with a straight push), and of course enemy tactics will adapt to negate your pushing attack. 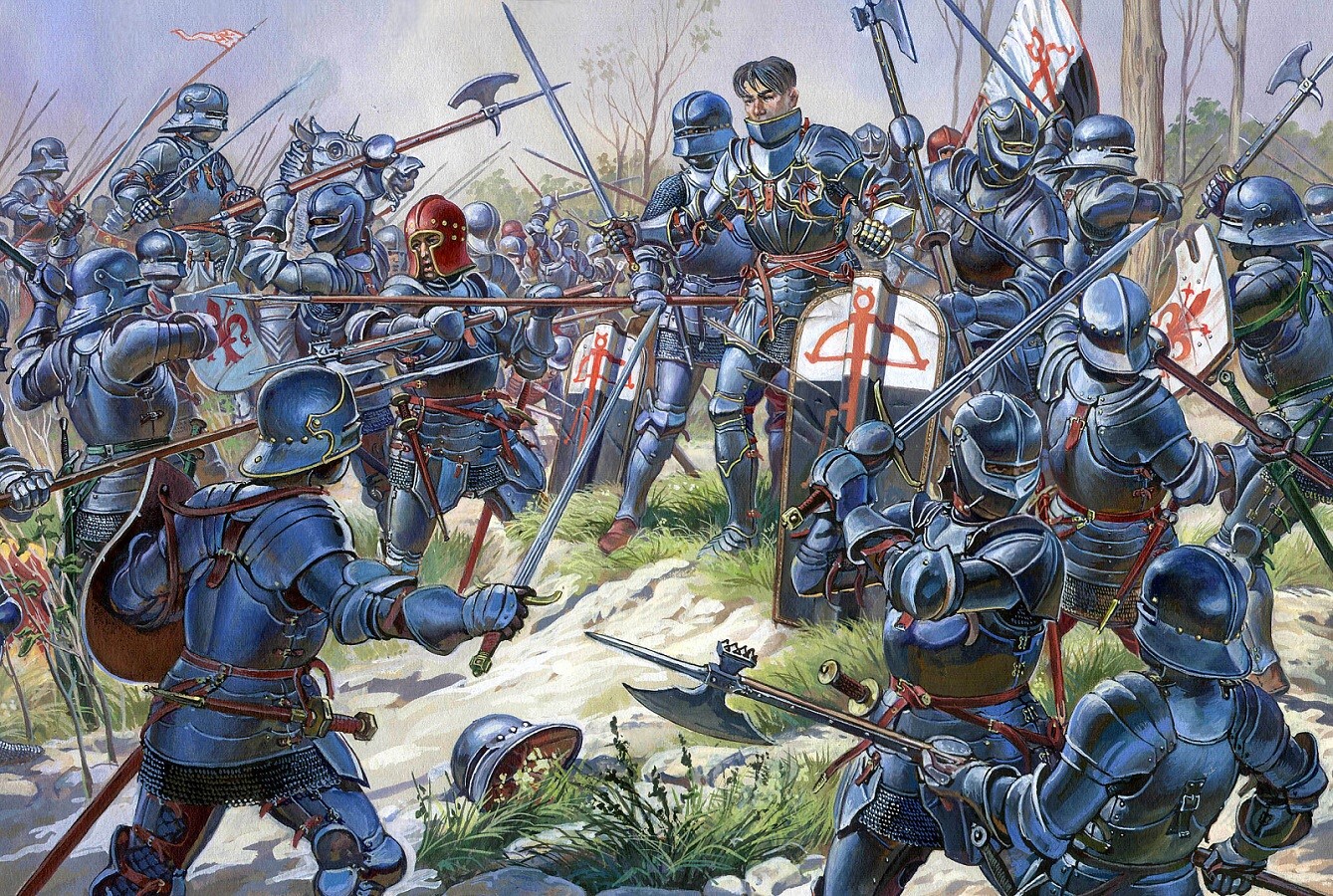 Real life pole arms were designed to give the soldier several different options (the pike may be an exception, but pike squares were never left on their own, operating with other troops). A European halberd comes with a hook to drag a knight from his horse, a spear point to thrust (or use as a pike to repel a cavalry charge) and an axe head to smash through armour. The long reach and leverage permitted you to deal with enemy cavalry, as well as shield walls and armoured enemy soldiers on foot. 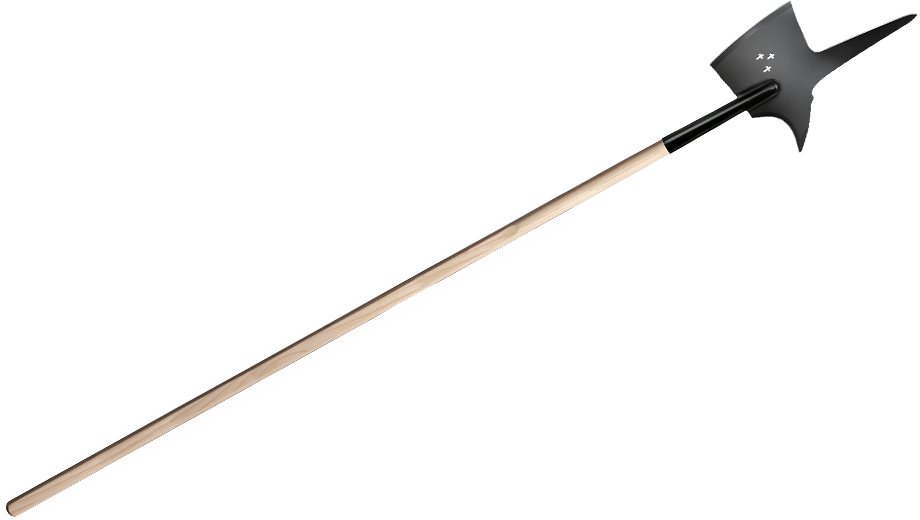 A glaive uses the leverage of the long handle to provide a much greater amount of power to a slashing attack, but since the blade is similar to a Katana, there is still the opportunity to thrust with it as well: 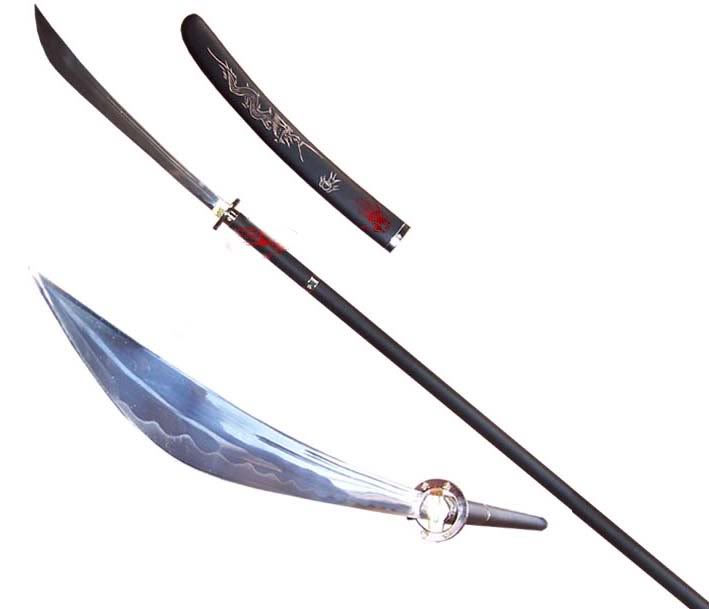 A Naginata is a more extreme version, being much lighter and faster than the Glaive, so the power of the attack is due to the energy of the swing, not the mass of the weapon. This also allows for faster thrusting and parrying as well. 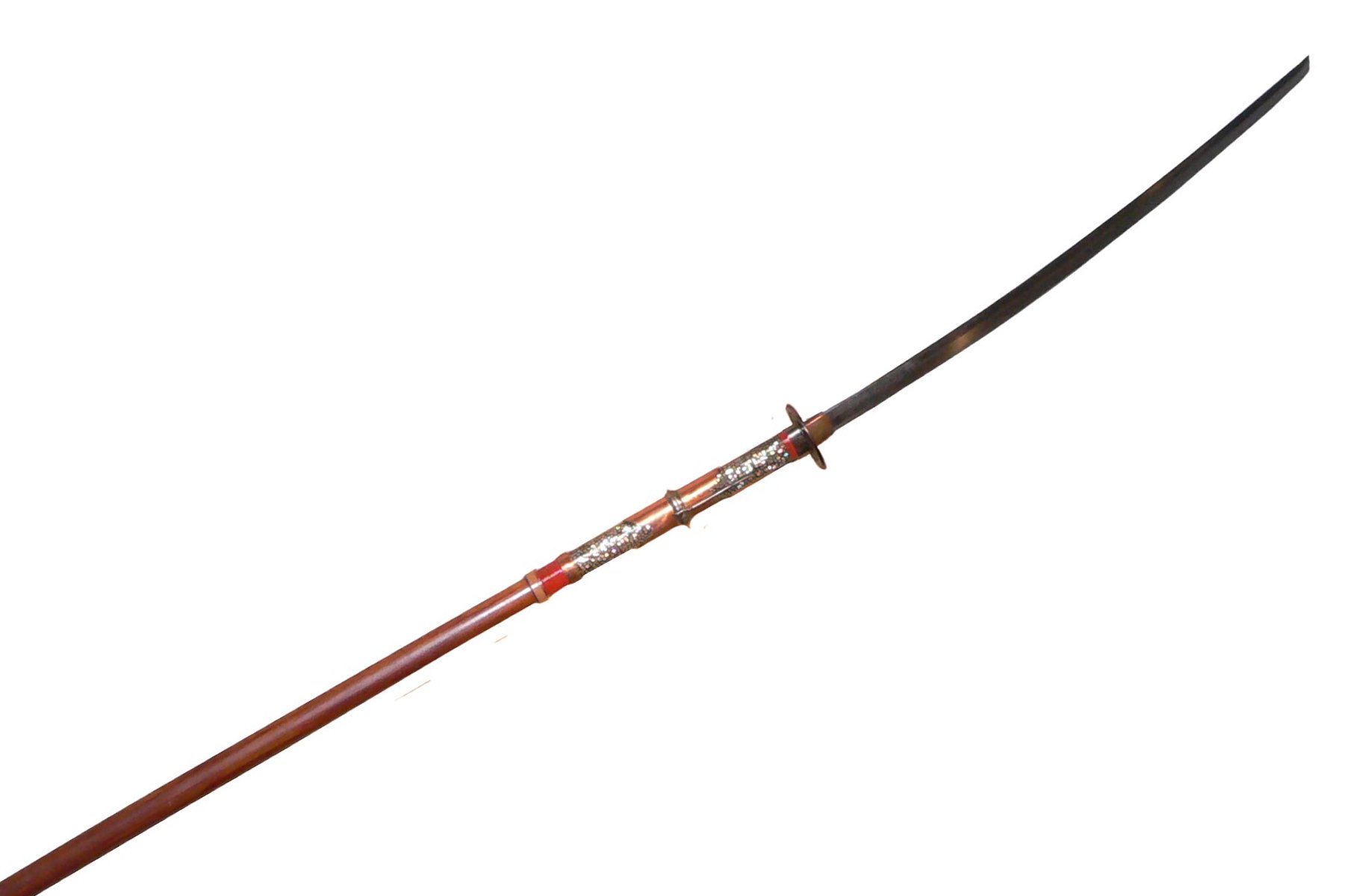 A heavy tip does actually help with penetration vs a moving opponent.

If you hit someone with a spear, it doesn't automatically go right through them. You have to push it through with some force or momentum. It also rarely hits perfectly square. If you hit perfectly square, it matters little if the tip is heavy or not, you can just commit to the attack, and drive the attack home yourself.

We fight in a non-perfect world. No opponent stands there and gets hit square in the chest. They're dodging and weaving. Some of this dodging can be done while they are touching the spear. It may happen when the speartip strikes them, or it may be that they reached out to deflect the spear.

When they seek to deflect your spear, they have a simple goal. They need to change the line of motion of the spear such that it no longer goes through their body before the spear finishes its job. This can be done by moving the spear or by moving their body. Generally speaking, the spear is lighter weight, so it is typical to want to deflect the spear.

When they are deflecting the spear, you really can't do anything about it. You are too far away, with a long stick giving you horrible mechanical advantage. A skilled individual may be able to do clever tricks to overcome this, but for most people, the deflection of the spear is a 1 person game between the defender and the spear.

At a more advanced level, a heavy speartip offers some interesting gambits. Because the spear will keep moving on its own after you stop pushing it (from its inertia), one may be able to stop pushing the strike a little sooner, and start claiming control of the stick earlier while the momentum of the spear continues to move it forward. However, this creates situations where the spear can overextend you, so those are more difficult to explore.

When exploring such advanced weapons, the momentum games are typically not analyzed to find the ideal balance. Instead, the weapons are used and fine tuned through experimentation and warfare. Whatever balance suits the combat style best is the one that is used.

Not the answer you're looking for? Browse other questions tagged internal-consistency warfare weapons .

15
How difficult would it be to make high-power energy weapons undetectable?
1
what advantage might a blue-green laser have underwater (if any)?
32
Is there any real potential advantage to having two hearts?
6
Is there any advantage in a railgun/coilgun having multiple barrels?
7
Is my plasma weapon design any good?
2
Would there be any advantage to employ once enemy mercenaries to fight in a medieval war?
16
Is there any advantage to using a centralized hivemind?
13
Would an ultra-heavy tank be a resource-efficient zombie-extermination unit for an CBRN-contaminated environment?