Is a Jupiter-sized planet plausible in a habitable zone?

We lived through loads of questions regarding aquatic races, so buckle up, I am going to gather some ideas around insectoids.

The homeworld and race

When I set the definition of their home world and their mindset, I have to explain "why would they want to shoot for the Moon?"

If their home world was a stand alone planet with a moon, I could be hoping for a Phobos-sized moon, which makes no sense whatsoever to go there.

So, the different idea is: The moon is a different moon of the same planet, and we are already on a moon.

But is it plausible?

Is it plausible to have a gas giant in the habitable zone of a Sun-sized star? Would there be any drawbacks for life to start on one of the moons of such a planet?

Edit: To clarify: I am thinking of a setup, where the main planet is a gas giant the size of Jupiter or bigger. And the homeworld planet is orbiting around it as one of its moons.

We have already found exo-planets matching this criteria. For example HD_100777_b has a mass just slightly higher than Jupiter and orbits its star at the same distance from the sun that our earth does. (The star is a similar size to our sun but I didn't check the brightness so I don't know for sure if it's in the habitable zone). 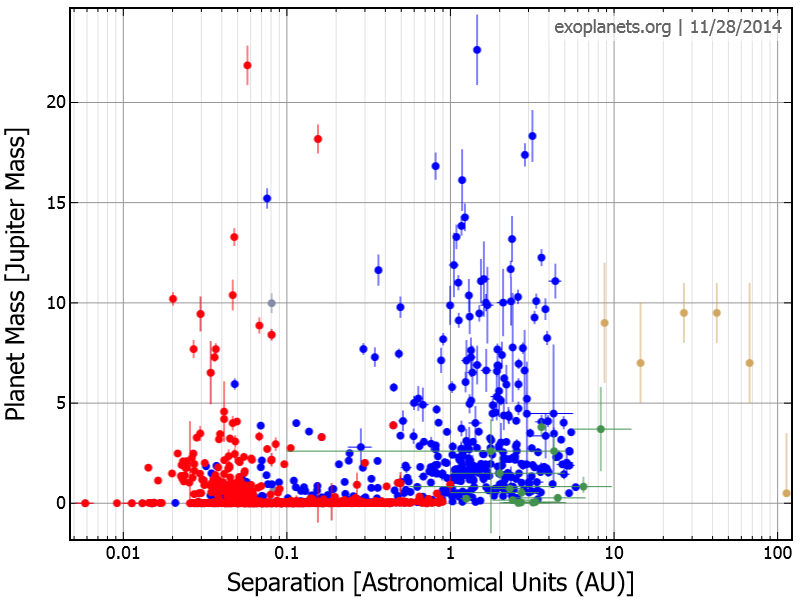 This makes it clear that there are a lot of planets matching the size and distance you need.

This would only take a few simply steps, and a small bit of luck. Here's how it could happen:

This is tricky. Given the choice, I'd pick a terrestrial planet orbiting by itself over a moon like this to harbor life. In the scenario I just described, there are a lot of factors that could make things tough for life, the eccentricity of the orbit being one of them. I'd say that life here could develop, but probably in a more shielded environment. Underground would be my choice. Extremophiles could be the first to spring up, and over time, perhaps they could evolve into the insectoids you want.

How attached are you to the 0.8g figure for homeworld surface gravity?

Smaller moons are generally more plausible; Ganymede (Jupiter's biggest) is about 0.15g. Depending on your assumptions for density, your homeworld would be about 30 Ganymede masses, which is something like 10 times the mass of all Jupiter's moons together.

A larger primary could possibly support that, though. Here's a paper describing simulations of gas giants up to 12 Jupiter masses forming moons larger than Mars.

A very recient SETI weekly seminar (posted on youtube) was about planet formation and migration. Link

It is well worth watching to see how gas giants form and move around the system and why ours is the strange one.

From those details, figure how a gas giant moves in and then out, stopping at the right distance; meanwhile it captures a sizable terrestrial planet rather than scattering it or rolling right over it.

Basically, add a second smaller giant (like ours), adjust the composition of the protosolar disk and fiddle with the timing by clearing the remaining material at the right time, and add in a dash of luck. Perhaps one of the original close-in rocky worlds is tossed into a long commet-like orbit and it comes back near the same place in a few million years as orbits do, and by then the construction has wound down and it gets captued in a retrograde orbit by the giant occupying its former slot.

Not the answer you're looking for? Browse other questions tagged science-based planets habitability gas-giants .

2
Can a gas giant form in the Goldilocks zone and have habitable moons. And if it can how many of those moons could be habitable?
17
What could make an insect race intelligent?
40
Habitable moon of a gas giant: working out the sizes and distances
14
Is it possible that a gas giant of similar size to Jupiter could harbor life?