I wrote a novel based on a human civilization that lives floating cities and dirigibles on a small, atmosphere-abundant super-Earth with a liquid water core (there's a smaller solid core under that, but it's not important).

In this story, the largest floating city looks something like a giant ceiling fan, with a central "city" suspended in the eye of a giant hurricane on seven kilometer-long rotors which generate lift from rising hot air coming from deep inside the planet.

Now that I am going back to edit this novel, I realize there is a problem wit this: in the eye of a hurricane or typhoon on Earth, air is actually cold and traveling down due to the fluid dynamics of how hurricanes are generated and work. Hot air rises all around the eye, contacting the cold layer above it and precipitating the stormwall as it goes. Thus my city really needs a hurricane flipped on its head, so to speak, so that hot air is rapidly rising through a tight eye-like hole, breaking through some kind of large cold upper layer.

My planet has Earth-like temperature, atmospheric composition, pressure, and gravity about halfway down in its atmosphere, where the people live. Above this is a large, sparse layer of helium and hydrogen. Below it is a large, very dense layer of carbon dioxide, carbon monoxide, and lesser amounts of other dense gases and vaporized particulates. Below that the world-ocean's surface is subject to rampant greenhouse-gas effects, its temperature perpetually on average being near boiling.

Is there a way to explain a flipped hurricane type of storm system on my planet?

The closest weather form I can find is the Anticyclone caused by a warm high pressure system.

Interestingly most gas giant 'spots' are anti-cyclones (we can tell by the rotation direction).

These type of weather patterns on Earth are much more diffuse than a hurricane or cyclone. You would need some form of constant unmoving heat source to make any kind of constant large weather form. On Earth they normally form over warm land masses.

If your planet was a water world with a small continent (possibly volcanic for added heat generation), this might form a semi-stable large anticyclone directly over the continent.

Even given this unlikely weather system forming, it would be unlikely to support a city from it's updraft winds. In hurricanes the higher wind speeds are in the horizontal direction around the storm, with the average vertical wind speed of only 4.2 m/s ~10 mile per hour. This light breeze isn't going to hold up a city.

You may need to do a lot more editing.

Large Gas giant planets like Jupiter and to a lesser extent Saturn have such a large standing column that the pressure under the atmosphere is enough to compress hydrogen into a metallic solid. Even "Ice Giants" like Uranus and Neptune are thought to have some pretty exotic physics and chemistry going on deep below the atmosphere. 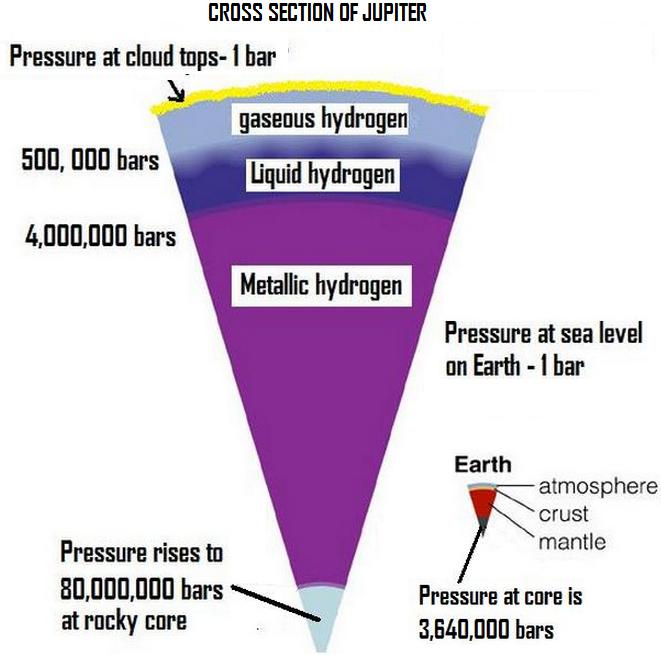 The reason I mention this is most gas giant planets have a core which radiates more heat than the planet receives from the Sun. This factoid will certainly drive "upside down" cyclones and any other sort of weather you can think of, so you issue of riding updrafts is easily solved.

Of course, if the core is liquid water, then the problem becomes far greater.

First off, the water will only stay liquid in a very narrow range of temperatures and pressures. It is actually thought that "Super Earth" planets might have oceans a thousand kilometres deep, but much of the water far below the surface will have been transformed into one of the multitudes of ices that water assumes under different pressure regimes.

Secondly, a Gas or Ice giant planet is far larger than the Earth, which explains the ultra compressed core and heat radiation coming from it. Even Ice Giants like Uranus and Neptune are large enough that their cores radiate the heat of formation, even after 4 billion years. 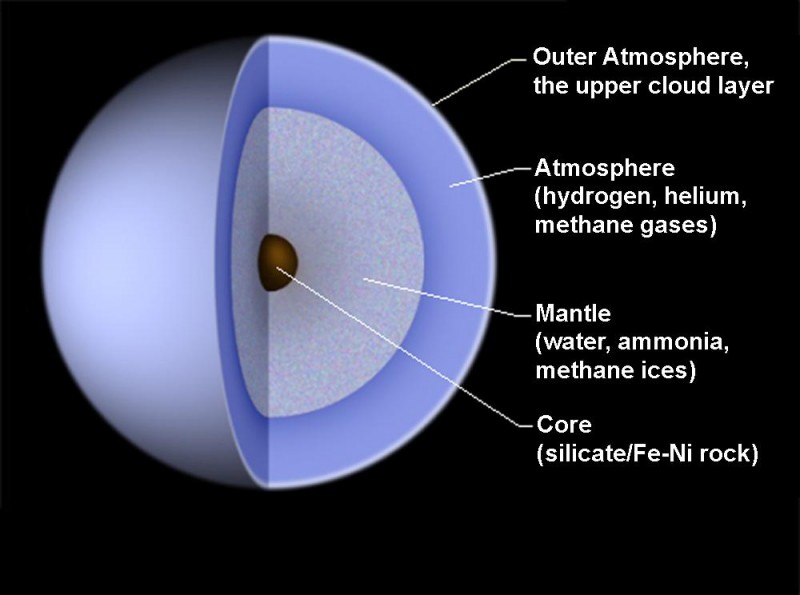 Finally, the radiation environment is going to be pretty intense inside and even in orbit around gas or ice giant planets, so your intrepid settlers will need to be in pretty heavily shielded habitat modules as well.

Tidally lock your Super Earth and give it a Super Storm.

You mentioned that your planet is mostly water. If you tidally lock your planet to the star, one side will receive all the sunlight while the other remains cooler (but not frozen).

Directly at the spot on the day-side that receives the most sunlight would naturally reside a Super Storm, sorta like a juiced up endless hurricane. Now this would get us our desired storm, but how do you float a city on it? Especially one like you described?

You have a couple of options.

1.) You extend the tips of the city into the eye-wall on all sides. With a Superstorm and its winds of possibly 400mph or greater there should be plenty of lift to overcome the city weight and the meager eye downdraft. There would be some hurdles to overcome however.

Hurricanes commonly go through eye-wall replacement cycles in which a new eye-wall springs up inside the outer regions of the eye. These would have to be dealt with extendable arms that could adjust for rapid changes.

Superstorm meanderings and orbital cyclones: Does your city have the ability to move on its own power at times? How well does it do if one side is receiving more torque than the others? With other low pressures (or even other full fledged cyclones) orbiting around the central low your city would need to be able to handle severe turbulence.

These hurdles are not impossible to overcome; your city just needs to be designed with these in mind.

2.) You use the cold descending air to create the galaxies best hot air balloon city.

Fill your city with large amounts of hot air containers. Like a hot air balloon, hot air will want to rise in respect to cold air. The greater the temperature difference (the lower the internal air pressure), the more the effect.

This would allow you to stay above the turbulence of the storm, bypassing most of the previous hurdles.

Things you should know

Only low pressure storms create eyes like the one you are describing. The eye is created by centrifugal force as their fastest winds are found right outside the center. The exception to having the strongest winds in the center are the extra-tropical storms. However, their eyes are not stable over long periods and 1are far more rare. High pressure storms such as Jupiter's Great Red Spot and our high pressure zones on Earth feature their strongest winds on the outside edges. Hence no eye.

So if you want a storm with an eye it needs to be a low pressure storm. Flipping the direction of the updraft to a downdraft would not give you what you desire. It would turn what looks like a hurricane, into a vast area of sunny weather surrounded by showery bands of thunderstorms on the outside. Turning just the eye downdraft into an updraft also wouldn't work. Even if you somehow ignored the effect of centrifugal force, an updraft would condense into a cloud, rain, and storm. No eye. It is the downward moving air that cuts out the clouds in the eye so we can see it. Without it the storm would have a very cloudy and foggy mess for the eye.

Not the answer you're looking for? Browse other questions tagged planets physics hard-science earth-like climate .

9
Exoplanetary Review: Rock Storms
12
Choosing axial tilt for human habitable planet for largest temperature variations
49
How would you know your floating island was losing altitude?
19
Is it possible to place a permanent probe on Uranus?
2
Designing a super-comfortable Earth analog
4
Looking for a review of my tidally locked red dwarf planet system specs!
3
Gas Giant with solid surface
2
Could a habitable gas giant with an electropshere exist?
2
What size/distance a planet should be from its star to have a dense atmosphere and not become a gas giant?
6
Atmospheric pressure in an almost empty world with a specific habitable zone far above the ground