Imagine an Earth-like planet with oceans that are comprised roughly 50/50 of heavy water and normal water. My understanding is that while heavy water ice sinks in normal water, it would float on heavy water. But would it float completely below the surface in an ocean that is a mix of heavy and normal water, or would part of it be out of the water like a regular iceberg on Earth?

I want to make sure there isn't any massive flaw in my understanding in whether such a thing (completely underwater icebergs) would be possible.

Thanks everybody. To expand on what I'm thinking about, I'm imagining a planet that has one supercontinent in the north, and the rest of the planet covered in one big super-ocean, with land:water ratio being around 25:75; so an ocean far bigger than any currently on Earth.

I gather from the comments that the big issue is that this ocean would eventually stratify into the different kinds of water. I think what I want to try and do is reverse engineer reasons why the ocean would stay stirred up, such tidal forces from a large orbiting moon, as well as biological processes (part of what I'm imagining for the ecosystem on this planet are lifeforms that photosynthesise with heavy water, so therefore dive down to fill up with D20 and then dive up to be nearer the sun).

I'm less interested in there being super-stable conditions that allow the icebergs to glide at a fixed depth, in fact, the more chaotic the system the better.

Would D2O icebergs be more likely to form if the planet received less energy from it's star? Or if the ocean had significantly less salt than our oceans?

Again, thanks for all your comments!

Assuming a spherical cow in a vacuum.

I mean a planet with 50/50 D/H instead of almost entirely H.

Any given D or H atom is going to have a 50/50 chance of binding with either a D or an H atom.

What does this mean in practice?

It means that your oceans aren't D2O and H2O, they're a mix of D2O H2O and HDO (I believe a 25/25/50 bias towards the last, semiheavy water). It's that semiheavy water that's the confounding molecule. It's not normally interesting in itself, it's usually considered a raw material for making D2O, but in this case it'll be a solid proportion of your water and needs to be accounted for.

In terms of your calculations, you now have three weights of water and three of ice, ignoring the mixtures.

Apparently people spend their lives studying this: Chapter 3 in this book for example. Also XKCD forum. Both found via our own Physics.SE. I think we can reliably say the water is evenly mixed. This is before considering the oxygen isotopes, you could make some very heavy water.

It's all a question of densities. Since the heavy water is about 11% denser than normal water the 2 will naturally separate in a static ocean. Obviously the ocean is not static, there is up and down movement of water due to temperature, but the difference between cold water (0C) and hot water (40C) is less than 1 percent so any currents will occur in the top half of the ocean where the normal water is and the heavy water will not be affected.

Even with the effects of wind and tide, over billions of years, the two will separate completely. 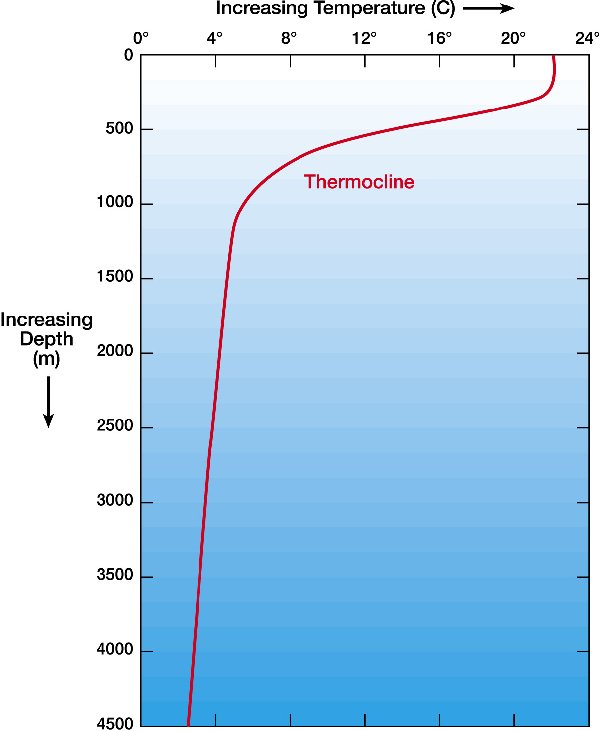 All in all, it's not possible. Which is probably a good thing because heavy water has negative effects on plants and animals (at least on Earth, you might be able to make a case for life adapting to it on another planet).

Even if you could form ice that's denser than the water around it, it would simply sink to the bottom of the ocean (or until it reaches the heavy water portion). The water density changes very little with depth, mostly due to changes in temperature and salinity. We are talking less than 1%, so heavy water ice will simply sink in normal water. Here is a cool experiment showing just that: http://mathscinotes.com/2014/02/heavy-water-ice-cubes-do-not-float/

Unfortunately...the mass/buoyancy differences between Heavy water and Normal water are negligible when compared to the forces of convection, currents, wind/wave/biological agitation, thermoclines, gas release from the ocean floor, Brownian motion, and all of the many, many other forces out there that are stirring up the ocean. You aren't going to get nice, tidy layers of water...there's too much stirring going on.

More likely, you'd end up with icebergs that simply sat lower in the water than normal, with a few rare occasions where you might get one that was mostly submerged.

So, in general, an iceberg formed by freezing ocean water would be made of more heavy water than normal water, and would thus sit lower in the roughly 50/50 mixture that was the ocean (slightly different from that, because more of the heavy water that was present at the time froze.)

Exactly how deep in the water said iceberg would sit is mostly dependent on how quickly it formed, and how it formed in the first place.

One way in which icebergs form is by breaking off from glaciers, which are built up atop mountains via precipitation. These icebergs would start off with a slightly higher percentage of normal water, because normal water (having a slightly lower boiling point) evaporates more readily than heavy water...though not by very much.

The other way icebergs form is by direct freezing of ocean water, which then breaks up as it starts to thaw. These would form with a higher percentage of heavy water, because heavy water freezes faster than normal water.

Ultimately, the problem is that the 3.82 degrees C difference is too small. If you could hold the temperature right at 2 degrees Celsius for a long time, you could form icebergs of almost pure heavy water (which would sink in the 50/50 mix of the ocean...they wouldn't reach an equilibrium point where the Heavy Water concentration was higher and they'd start to float). However, daily temperatures tend to swing more than 3.82 degrees C, so you're pretty unlikely to see these optimal conditions.

(Also possibly worth mentioning....50% deuteration in life-as-we-know-it is fatal to anything more complicated than bacteria)

So, TL;DR: Your ocean would be a pretty consistent mixture of half and half H2O/D2O, and the chemical differences between the two are narrow enough that most icebergs would end up sitting a little lower or higher in the water (depending on how they formed), but would not magically float halfway down the depths of the ocean. There are too many forces at work keeping the ocean nicely stirred up.

So what I'm getting out of your question is the following scenario:

We've got a large body of water, like a lake or an ocean, that contains both H20 and D20. There are some H20 icebergs and D20 icebergs in the water and you're wondering if/where they will float.

Gotta say, this is a pretty cool question! Now let's do some science :D

Now how about our body of water? Is it agitated at all? Sufficiently large bodies of water tend to be large enough to experience winds across their surfaces, making waves. This agitates the water and mixes it up, but maybe not enough to get the H20 and D20 to mix will. After all, when you swim deeply even in fairly wind-agitated water, it's still easy to feel a thermocline about 13 feet down in most lakes. So again, we'll apply Occam's Razor to our thought experiment and go with a perfectly still body of water, at exactly 50% each H20 and D20, split right across the middle.

Now we get to the icebergs and the water interacting! With this impossibly simplified set-up, you're correct in assuming the D20 bergs will "float" on the D20 water around halfway deep in the lake, and the H20 bergs will sit near the surface as you'd expect any iceberg to. If the bergs are mixed ice, they would sit somewhere between halfway into the lake and on the surface depending on their composition, more D20 being closer to the middle depth of the lake. If our lake is agitated and mixing, then things get REALLY cool as we essentially have dynamic buoyancy for each berg depending on the water column its in. There's probably some crazy math to show how that would change over time, and would probably be a pretty cool simulation, but that's just a biiiit out of the scope of what we're doing here.

Hope this helped, be sure to let me know if it did!

Are you sure the heavy water would separate? Our ocean has pretty powerful pumping mechanisms to get surface water to the depths and vice versa. e.g. cold saline water sinks at the poles as sea ice forms, then flows along the ocean floor all the way to the equator (or beyond). Google the global ocean conveyor belt or thermohaline circulation.

As as aside, at the times in Earth's geological history when we had no ice caps, everything bigger than a bacteria in the deep oceans died because there was no oxygenated water being pumped down there (so oxygen would decline with depth, way beyond the modern oxygen minimum layer of 1000m). So if the heavy water does become a separate layer, nutrients are just going to sink or be osmosis-ed (omosed?) into it and vanish from the various biological cycles.

Not the answer you're looking for? Browse other questions tagged science-based physics climate ice or ask your own question.

3
Ocean and air currents on a water planet
7
The Polar Pangaea
4
What would happen if there was no Antarctic Landmass?
9
can a water cycle exist on a planet without oceans?
1
Rocky core, internal ocean, ice crust, external ocean
3
Does gravity effect the density of water on an ocean planet?
9
Can a planet of heavy and regular rains or monsoons have little to no surface water?
8
How much surface water do I need for plate-tectonics on a planet?