Could a satellite make the gravity of a planet increase?

Let's say that planet X with a gravity similar to Earth increases its gravity by a certain amount. The increase is great enough to make living conditions difficult or impossible: for instance, the G-force could make buildings structures crack.

Now let's say this happens every 2 years (or whenever) for a specific period (2 weeks or a month), and that after this time it goes back to its regular "Earth gravity". Could this happen because of a satellite orbiting planet X was closer during that period? Is this possible to some extent or am I just talking nonsense?

Gravity derives from and is proportional to the mass of a planet. A secondary body that moves closer to a primary body will not increase either the mass or the gravity of the primary body.

For the gravity to increase, the planet would have to increase its overall mass (and either size or density) for a short period. It is hard to conceive of a reason (in understood physics) why this would be the case.

Far more plausible is that the secondary body's gravity is high enough that the tidal forces of the planet become very extreme, as oceans and other 'loose mass' are affected by the passing secondary body. This might make things difficult or even 'unliveable', especially in coastal areas which could, in theory, be pounded by tsunami-level waves.

Gravity is probably the least-well understood of the Four Fundamental Forces, so it might be possible that science will discover a way to do this, but for now it is not physically possible given our current understanding of physics.

Gravity is a direct result of mass. All mass creates a gravitational field, no matter how small. Large collections of mass, such as planets or stars, will produce very large gravitational fields. The only way to increase or decrease the gravity of a planet is to add or remove mass proportional to the increase of gravity.

For example, if you wanted to increase the gravity of the Earth from 1g to 2g, you would need to add at least 100% more mass to the Earth, effectively doubling the Earth's mass. This is wildly fantastical.

That being said, there is a theoretical type of matter called Dark Matter. Very little about Dark Matter is understood. In fact, it has never been "seen" in the traditional sense because it does not interact with electromagnetic waves. It must exist, though, because galaxies could not form without it, and there does exist evidence of its existence in the form of Gravitational observations.

If your planet were somehow being affected by Dark Matter (which DOES seem to have some sort of mass, or at least produce gravity) it might be possible to increase the effective gravity of a planet somehow. I'm hesitant to say it's possible, though, because Dark Matter is very weird, and might not interact with regular matter in predictable ways. I'm also confident no satellite in orbit could manipulate Dark Matter in this way; it would have to be a natural phenomenon if you're actually willing to use it at all.

If I were writing a story where a planet was rendered uninhabitable due to periodic disasters, I would focus on Geological Activity. Earthquakes on the Earth are relatively timid compared to what is possible. A moon (or other orbital body with high enough mass) could cause dramatic Earthquakes and Volcanic Eruptions. This would be especially true of the moon were in a highly elliptical orbit. Every time it passed close to the planet it would cause huge issues.

Yes. Here's an example of a satellite that does exactly that: 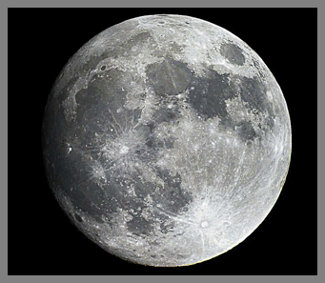 Any sufficiently large body is going to have strong gravitational effects on the planet it orbits. We generally call these tides. As to the question: "Can these gravitational forces be strong enough to destroy buildings?" Well, it depends on how strong the buildings are.

Any gravitational effect on a planet is going to be capped by the gravitational force of the planet you're standing on. Why? Because more gravity than that and the planet would break apart. In general, the distance that two bodies can exist at, relative to one another, and be structurally sound due to hydrostatic equilibrium is defined by the Roche limit, which you can use to figure out how close together your planet and its satellite can be. Roughly defined, the Roche limit is the distance at which the difference between the cetripital force required to keep the planet orbiting and the force of gravity from the more distant body is equal to the force of gravity from the body you are standing on.

For higher gravitational forces (i.e. above 1.1G), your best bet is to be standing on a relatively small body orbiting a relatively massive one at a great distance. If the front and back of your planet are about the same distance from the primary, relative to the distance of your planet to the primary, they'd experience about the same gravitational force from the primary. Again, since tidal forces can't be greater than the gravity of the planet you're standing on, apparent gravity will vary from a bit more than 0G to a bit less than 2G when your planet (which is now the sattelite) is at periapsis in its orbit around the primary.

Most buildings, if constructed appropriately, can probably withstand 2G of acceleration. The rampant volcanism caused by the intense tidal heating your planet/satellite will experience from the tidal forces in question will probably destroy quite a few, though.

Not the answer you're looking for? Browse other questions tagged planets gravity .

-1
If the moon were made of cheese, what would Maxwell's Laws become?

19
What determines the length of a day on a planet?
11
How fast would a planet have to be spinning for the centrifugal/centripetal force to cancel out the force of gravity near the equator?
3
Moon rotation & orbit periods differs - can it be made feasible?
4
What are the atmospheric conditions on a planet tidally locked to its moon?
2
Conditions for human life in a Jupiter-like system
15
Could a robotic exoskeleton give humans Earth like movements on a high gravity planet?
14
How large can surface gravity anomalies grow before the planet becomes uninhabitable?
8
Can early astronomers determine the gravity of their planet's "moon" without ever going there?
1
How long would a planet that losses its gravity take to break up?
39
Can a planet stay cracked?