I'm currently working on two connected continents for the world I'm building. They've created a convergent boundary where they meet, which has given rise to an east-west mountain range, in addition to a north-south range on the northern continent. There's also a deep bay or sea that will eventually close. The relevant section looks like this: 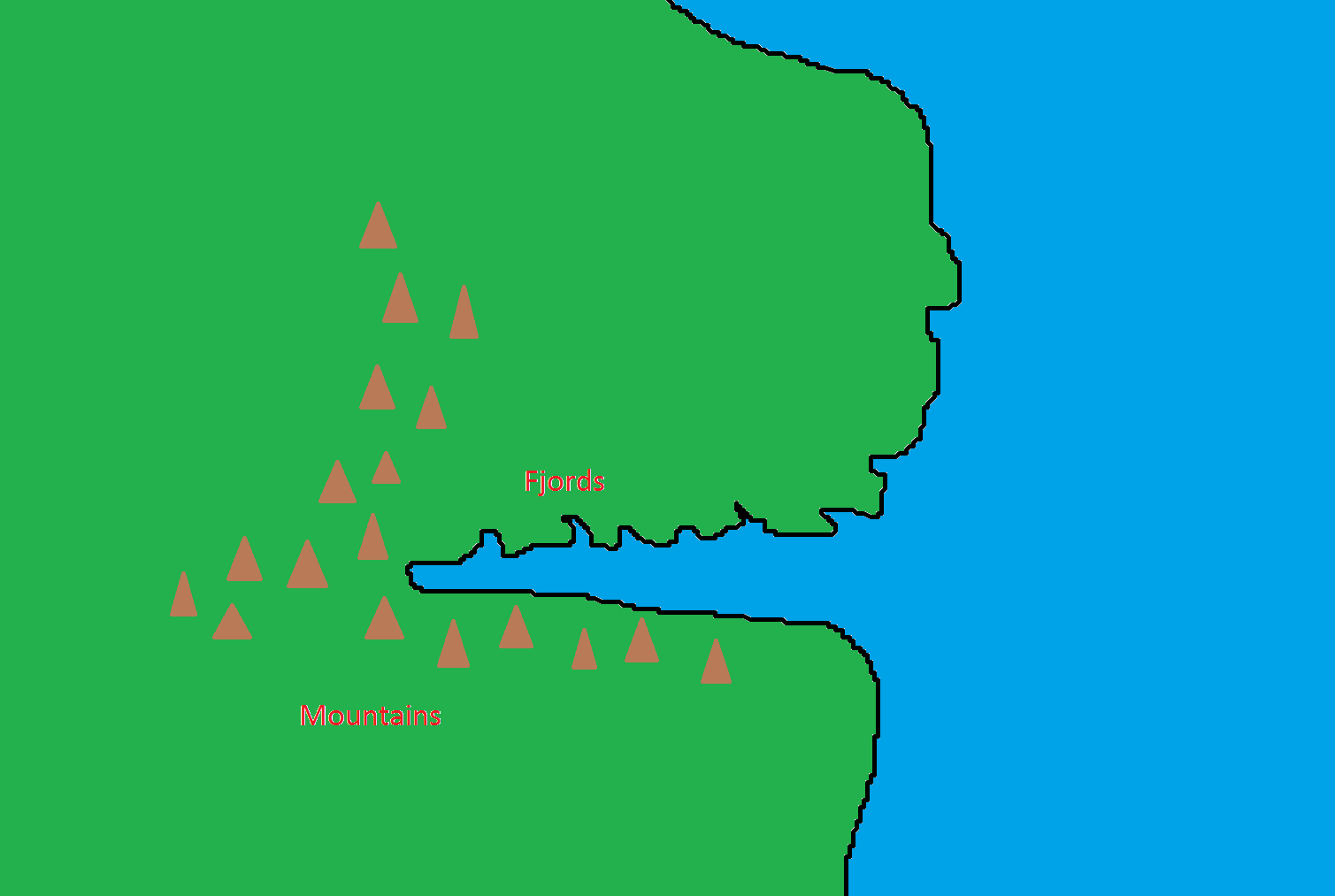 The problem is, the two continents have come together somewhere around my world's equator, and thus the fjords that formerly populated the northern continent in the northern polar region find themselves regularly enduring temperatures of 100 degrees Fahrenheit.

Actually, the above explanation - a continental merger - is not what I want. I'd rather have the two continents form together, where they are now, rather than have continental drift send one down from the north. This is because the east-west mountain range is inconvenient for the purposes of a story I've set in this world. However, I couldn't come up with a better explanation for equatorial fjords, although I did consider having a version of the Snowball Earth, which should cover the tropics.

Therefore, I turn to Worldbuilding Stack Exchange. Is it possible for fjords to form on the equator? If so, how?

It's worth noting, as I just found out, that Slartibartfast designed Africa with fjords for the Earth, Mark II, but he's not around for consultations.

You probably can't get tropical fjords, since they're glacially formed by definition and likely to erode before an arctic environment can become tropical, but you can achieve similar effects with a rift valley.

Rift valleys form at a divergent plate boundary, where two continental plates are moving apart. In the case of the Great Rift Valley (pictured above), the valley is forming at a point where the African continental plate is splitting in half. Plate boundaries, of course, can form at any latitude, from the arctic to the tropics.

For a fjord-like rift valley, your best bet is probably to have a relatively young rift valley forming at a point where a continental plate dips beneath the ocean, such as the Eastern Seaboard of the US in the modern day or the coasts of the Western Interior Seaway, a vast, shallow sea that covered much of the North American interior during the Cretaceous. Such a valley would form a steep-walled ocean inlet superficially very similar to a fjord, though formed by a very different process.

Technically Fjords are formed by glacial action, so they are unlikely to be found in the tropics, unless your world has undergone some very serious climate changes or the land itself has moved as you speculated.

You could still have Fjord like landforms formed in other ways, but technically they wouldn't be fjords.

One option is a Ria these landforms can be quite similar to fjords, but are caused by former river valleys being flooded by rising ocean levels.

You may go with Cliffed coasts if you want fjords for the looks: https://en.wikipedia.org/wiki/Cliffed_coast It might be possible for them to occur the way you draw them in your map. They are the coasts that contain soft rocks which are eroded by waves.

Ria coasts can look so much like fjords they are commonly mistaken for them: http://www.ocvts.org/classroomconnect/classrooms/jwnek/documents/Oceanography/Presentations/Ria%20Coast.pdf

As others have said, in the time it takes for a continent to move from where fjords would form down to the equator, the fjords would likely have eroded into a less rugged landscape.

Not the answer you're looking for? Browse other questions tagged science-based reality-check climate geography .

12
Centralised continent, with sea/wind currents?
8
What is the climate of a mountain range at the border of the polar front?
10
What would the weather on this continent be like?
2
Is it possible to prevent colonization from the sea of one hemisphere from another hemisphere?
7
Can my land-mass realistically work?
1
How can I keep an area next to a mountain range from being a desert?
6
Can I have a forest in the rain shadow of a mountain range?
5
How Would I Make an Oceanless World Feasible?
3
Magical Island question part 2: How to add desert to it
4
Climates of a Eurasia-like continent in the tropics