Would a non-centralized sensory layout be favor on sapient aliens?

In all animals of higher intelligence, the sensory organs are all localized in the head. The head alone contains the senses of smell, sight, hearing and taste. This is because it is efficient to be able to move all of your sensory objects towards a single source with little effort.

Is there an evolutionary reason why an alien of higher intelligence would favor a non-centralized sensory layout?

One reason we are laid out the way we are is that it made sense as fish and aquatic creatures to be laid out that way for hydrodynamic reasons.

If a sentient being were to be descended from something like a scallop, for example, it would have eyes all along the edges. Octopi and squid have their brains laid out in something of a donut shape, so it is conceivable that a similar creature might have sensory organs distributed around the body with equidistant nerve paths to the brain. Arthur C Clarke described something like that in the novel version of 2010 as one of the creatures living in the oceans of Europa. 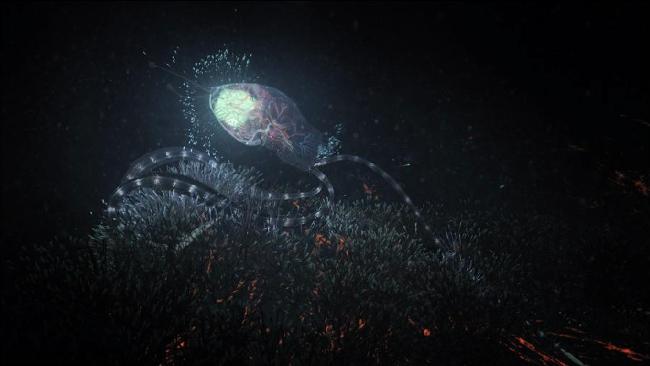 while not a direct illustration from the book, this gives you a sense of what Clarke was describing. Imagine the tentacles are covered in eyes

The downside of this arrangement is although you might be able to sense predators sneaking up on you, you don't have a distinct area of focus. Birds are a good example; hawks and other raptors have their eyes facing front, to provide stereo vision and accurately estimate the distance to the target, while pigeons and other "prey" birds have eyes on each side of their heads in order to sense the hawk swooping down.

For humans and other tool using creatures, having stereo vision and a place where you have your manipulating organs and eyesight converged makes a great deal of sense and allows you to focus on and manipulate objects.

I can think of a real world example that could be expanded upon, the Octopus.

The octopus does not have all of its neurons in a centralized "brain" location like we do.

A quote from Wikipedia:

Two-thirds of an octopus's neurons are found in the nerve cords of its arms, which have limited functional autonomy. Octopus arms show a variety of complex reflex actions that persist even when they have no input from the brain.

The multi-core approach of the octopus does seem to have advantages, octopi are known to use tools and solve problems.

Perhaps and evolutionary advantage to a non-centralized system is better at learning and adaptation due to multiple perspectives on the same problem.

Can I suggest a different way of thinking about this. For the sake of this example, lets define intelligence as the ability to model ones environment internally, using sensory input, and make accurate, predictive decisions based on that model that can be used to direct behaviors which in turn improve the viability of the creature. Ok? So your intelligent, to a greater or lesser extent, if you can see a situation, predict outcomes with some accuracy, and select behaviors that, with some statistical significance, lead to your success.

Again, for this example, lets say an intelligent creature becomes conscious when its ability to build internal models of its environment becomes so good, that the model includes a very refined and sophisticated model of itself and its own mind.

So, now we can turn the question in a way "I" think fits better with the science of evolutionary biology, and ask, does this particular non-centralized sensory array (some example we choose) allow a creature to develop a clear picture of its environment that can be fed into a model in its nervous system and can the creature act upon it? Assuming the answer is yes, the next question is, as this creature's intelligence evolves over time, and the creatures sensory array evolves with it, how will the array configuration change? Assuming intelligence is a huge evolutionary advantage, there will be great pressure on the sensory array to configure (in so far as the starting biology will allow) in a way that improves the accuracy of input to the model and the ability of the creature to execute the behaviors favored by the model. What will that configuration look like? I don't see that it is at all inevitable that the array will centralize. There would need to be no disadvantage to centralization for this to be favored. And it would seem, right off the bat, that a creature that can see in 360 degrees would start to suffer immediate disadvantages as its range of vision shrunk to fit a more centralized topology.

I could see a creature with 16 sight organs spaced around its body perhaps evolving two or three that drift together to give binocular or trinocular vision in part of its field, while leaving the others dispersed widely. After all, binocular vision does have significant model building and manipulation advantages, but probably not enough to favor elimination of a robust 360 degree sensor net.

I hope that you can use this way of thinking to imagine whatever creature you fancy as a starting progenitor for your new race, figure out how they sense the world, then imagine how they will evolve as, through time, mutations to their sense organs and the placement there of, are favored or penalized by evolution based on their impact to the creatures ability to build and use the predictive models that are the root of intelligence in this construct. What will your end creature end up looking like? How will their view of the world affect the model of reality they create? And will they model their environment effectively enough that they achieve consciousness?

Not the answer you're looking for? Browse other questions tagged reality-check creature-design aliens sapience senses or ask your own question.

31
Evolution of species with separate sapient and non-sapient forms?
16
Creature with a non-centralized brain
5
Viability of a hybrid endo-/exo- skeletal intelligent (space-age) race
99
Would intelligent life evolve any other body plan than humanoid?
5
How can I tell if stone age aliens are sapient?
8
Objects detectable only with blindsight
7
Currency for blind amphibious aliens
4
Biological touch based high bandwidth communication