Dam wall failure: How to stop a Domino effect?

If you have a series of dams built along a valley, what will happen if the last one in the line fails suddenly and catastrophically?

You have a dam wall about halfway down a long narrow valley. It is made up like a sandwich. A layer of large shaped granite rocks connected by iron and metal bands, a internal layer- a mix of compacted rubble, and roman like concrete, and then a second layer of large rocks. The dam wall shape is designed like hoover dam with the curve against the water pressure.

After a few decades to centuries the wall starts to deteriorate. You are capable of 'dredging' up the collected silts to use on your farmlands but you don't have the technology level of the original dam builders so you can't 'properly' maintain it. So to protect your existing thriving farmlands and cities downvalley you build a second dam wall a couple hundred metres from the original wall before it deteriorates too badly. The original does not collapse or fail.

This new dam area is allowed to fill up and the water pressure on both sides of the original wall 'maybe' helps keeps it upright. To allow fish and water transfer between the two there could be alterations done to the top layer of the original wall like permanently open riverlocks (there could be a system to close these locks if necessary) or maybe just allow the wall to be completely submerged.

I have for a long time thought that they would have a way of moving water from one area to another. Diverting and managing water flow in and out of the dam/s to surrounding valleys. Using waterwheels, arcimedes screws, maybe even some sort of primitive suction action. Another couple of decades/centuries go by.

What happens to the original dam wall if the second dam wall fails suddenly?

Would the sudden loss of water pressure supporting the one side cause the original wall to fail at the same time? Especially if the original wall may be compromised internally by water seeping into the middle sandwich layer.

How do I get the original wall to hold?

Note I'm asking on worldbuilding as I'm not aware of any real life examples of dam's in series and dam failures like this.

EDIT I do believe I am actually thinking along the lines of the combination arch-gravity dam rather than just the arch dam like Hoover dam. This Question asked about a dam made up of blocks of stone rather than a continuous concrete setting seems to imply that a dam similar (but not exactly) will last at least for a century or two before failing due to the stresses.

No, it cannot hold

Reality check: your premise is wrong in that you have built an arch dam by materials that are not stable enough to support the arch. This means that that you have a dam that does not follow any kind of convention or known engineering principles.

But let us ignore that and instead just assume that what you actually mean is that you have a curved rock-fill embankment dam, like this one: 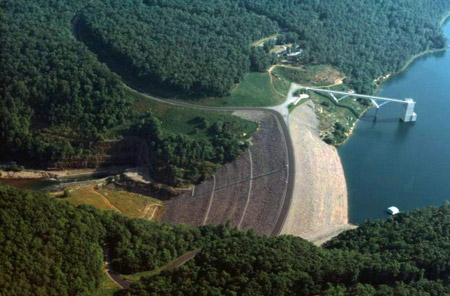 Will that hold if you 1) submerge it and 2) the downstream dam suddenly gives way and all the water between the dams drain?

Answer: there is no chance it will hold.

First you have submerged the dam, meaning that all the material on the downstream side is unsecured. The entire dam liquefied even before the disaster starts.

Second, you get a massive movement of water, which will wash much material away on the downstream face of the dam.

Third, the water on the upstream side of the old dam will flow over the edge and start washing it away there too.

Fourth, as a premise you said the old dam was already weak and beginning to deteriorate.

These things together means that the old dam simply cannot hold if the new dam fails. It is not a matter of forces suddenly changing, but that of water movement that simply washes the dam away.

Here is what it looks like when an embankment dam fails: Teton Dam disaster And do note that this dam was not submerged on the downstream side.

As is so often the case on this site, I believe that the answer is: It depends.  It depends on how much the original dam has deteriorated since the building of the second one.  I believe that the result will be the same as if you opened a valve (lock) in the lower dam and allowed all the water in the buffer zone to drain slowly.  This is approximately the same as what would have happened to the original dam in the same amount of time, if the second dam had not been built, except that ignores the beneficial effect of the presence of the new dam on the old one.  (BTW, I don’t know whether the new dam would protect the old one in the way you describe, but you didn’t ask that.)

I suggest the following thought experiment: Consider a shelf (e.g., a bookshelf, or a horizontal surface in a cabinet/closet) that is loaded with a weight that does not exceed the capacity that the shelf was designed for.  The shelf is beginning to show signs of stress, so you put your hand on the underside of the shelf and push up, to counter the weight that is pushing down.  You stand like that for years.  Then the doorbell rings, and you run to the door, abruptly removing the support from the shelf.  Would you expect this to cause the shelf to collapse?  I wouldn’t.  I would expect the same dynamic as I described for the dam: if it has further deteriorated enough in the intervening years, then it will collapse (as it would have done by now if you hadn’t been supporting it).  If it’s still capable of bearing the load, then it resumes bearing the load.

A comment mentions “two forces at once – the force of the water behind [the old dam] combined with a vacuum effect from the water moving away from the front.”  I believe that this is a misconception.  There is no such thing as a “vacuum effect,” per se.  What we perceive as a “vacuum effect” is just the lack of balance between two pressure zones.  If an unpressurized spacecraft (in the vacuum of space) is compromised by a meteoroid puncture (or by somebody opening a window), the papers on the desk, etc., won’t suddenly fly around and toward the breach.  Yes, obviously, the old dam will suddenly be subject to the unabated pressure of the water behind it, but there won’t be any “vacuum effect” in addition to that.  The turbulence of the water rushing out of the reservoir might introduce a chaotic effect, but (IMHO) that would be brief.

Not the answer you're looking for? Browse other questions tagged reality-check construction water-bodies or ask your own question.

2
Could you cool the earth's mantle and then bore into it?
2
A Dam That Looks Like A Brick Wall…Because It Really Is
4
How would intelligent life evolve on an Earth-like planet with dangerous high tide?
2
Can the Great Wall Be Greater?
2
How to make my motorcycle rider survive driving into a wall?
18
How quickly could a country build a tall concrete wall around a city?
6
How practical are walls and other tall fixed fortifications when it comes to the defense of a city in a post-apocalyptic setting?