Could an asteroid aerocapture around Earth?

Would it be possible for an asteroid in solar orbit to go near enough to the Earth that the Earth's atmosphere slows it down into an orbit that is, aside from its low perigee, stable without using a third object (such as the moon) to slow down? Or would the necessary forces destroy the asteroid?

If this is possible, could it then gravity assist off of the moon to get in a truly stable orbit? Also, if it is possible, what would happen on Earth?

While an aerocapture could slow an asteroid down enough to keep it from escaping back out into deep space, the problem you would face without a third body or additional applied force is that the periapsis (lowest point of orbit) now lies within the atmosphere. Subsequent orbital rotations would continue to slow it down until it falls into the atmosphere for good. 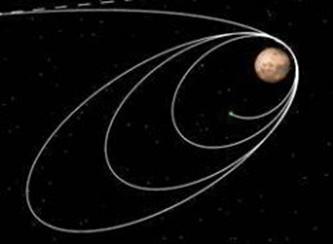 Here's an image for reference (source). For every pass, the point at which it contacts the atmosphere remains nearly the same, but the apoapsis (highest point of orbit) will continue to reduce until the path becomes suborbital, and into the planet it goes.

If you do have a third body such as the Moon however, it could potentially (if improbably) temporarily stabilize the orbit. I say temporarily because in order for the Moon to have enough influence on the asteroid to stabilize the orbit, the asteroid must continue to pass close enough to the Moon's orbital path that another such encounter would inevitably occur, throwing the asteroid into a different orbital path each time. This could eventually result in an Earth or Lunar collision, but not an escape, since too much energy would have been lost during the aerocapture.

Yes, I would say not impossible, but highly unlikely to happen naturally. Everything would have to happen perfectly for this to ever happen.

How it could happen:

And even after that your interactions with the moon could make your orbit unstable, it would be a very complicated orbital maneuver. We have only performed aero braking on a few space missions, and have never tried an aerocapture maneuver and that is with craft able to supply some maneuverability.

Not the answer you're looking for? Browse other questions tagged science-based physics moons .

3
Effects of an Asteroid Aerocapture on Earth?

18
How much stuff could we get into Earth orbit for the start-up cost of initiating asteroid mining?
27
Can you add a mini moon to Earth?
18
Is a moon inside a hollow Earth possible?
4
Could a man-made black hole deorbit the moon?
3
Effects of an Asteroid Aerocapture on Earth?
22
Reality Check: Habitable moon around earth-like planet
4
If we built a large moon close to Mars, could we make Mars a living world?
8
How can I lengthen a total solar eclipse on an earth-like planet?
10
Lifetime of the Moon's moon