Could this complex star system work in real life?

So, I'm working on a story which involves a triple star system that is full of planets. The first two stars, a G type (which is orbited by an asteroid belt and two small rocky worlds) and a B type (with a small rocky world and a super-earth), orbit around a common barycentre. There are also three gas giants that hold circumbinary orbits around the two stars.

The third star is an O type supergiant which orbits a barycentre between it and the binary pair. On this end of the system there are 3 rocky Earth sized planets, a Super-Earth, 4 gas giants, and 2 ice giants. Finally, there is a circumbinary comet-belt around the entire trinary system.

I know it's a lot of objects for just one star system, but could a system like this remain stable in real life?

This system isn't entirely implausible. Although you might need to reconsider where the barycentre(s) of the star combinations are located.

Your circimtrinary comet belt (not circumbinary) would be more like the Oort Cloud surrounding our solar system. It wouldn't want to be too close as the massive stars in this system would gravitationally perturb into plunging into the system.

With O and B stars present, this would be a very young system as the big stars would be only tens of millions of years old. This means the system has a very interesting story about its formation and development.

As for whether this triple system would work in real life, since this is only a conceptual scenario that is had to say, except that it is not completely implausible. There may be problems with its long term stability

More details such as the distances separating the stars, the orbits of the planets, and the periods of the orbits of all the bodies in the system would to be factored before any sensible conclusions can be formed.

I suspect rejigging will be needed, but the further refining of any concept is only business as usual.

I think this is all possible as long as the system is very very big. The trick is, every time I say an orbit is "much larger" than another, think 10 times wider. In your setup there are 5 levels of hierarchy: 1) G star planets, 2) G star - B star, 3) G+B star - gas giants, 4) O star - GB+gas giant, 5) comet belt around everything else. That means your system spans a factor of about 10^5 = 100,000 in size scales. If you add in the fact that there are multiple planets per system, which must be spread far-enough out to be stable, you're probably at about a factor of 1,000,000.

In the local parts of our Galaxy, a system can't be larger than about 100,000 AU without getting torn apart by the Galactic gravitational field ("galactic tides" is the technical term). In the denser environments where stars form, that limit is somewhere between 100 and 10,000 AU depending on the environment. Where O stars form it's more like 100-1000 AU since those form in denser star-forming clouds.

Your system is basically at the optimistic (local Galaxy) limit and implausible in the more constraining (star-forming region) limit. If your smallest orbit is 0.1 AU then your largest one is 100,000 AU.

I would recommend reducing the number of levels you have (where you have to make orbits bigger) and packing the levels you have with more planets/asteroids/comets. For example, here is a system with 8 stars but only three levels of hierarchy: 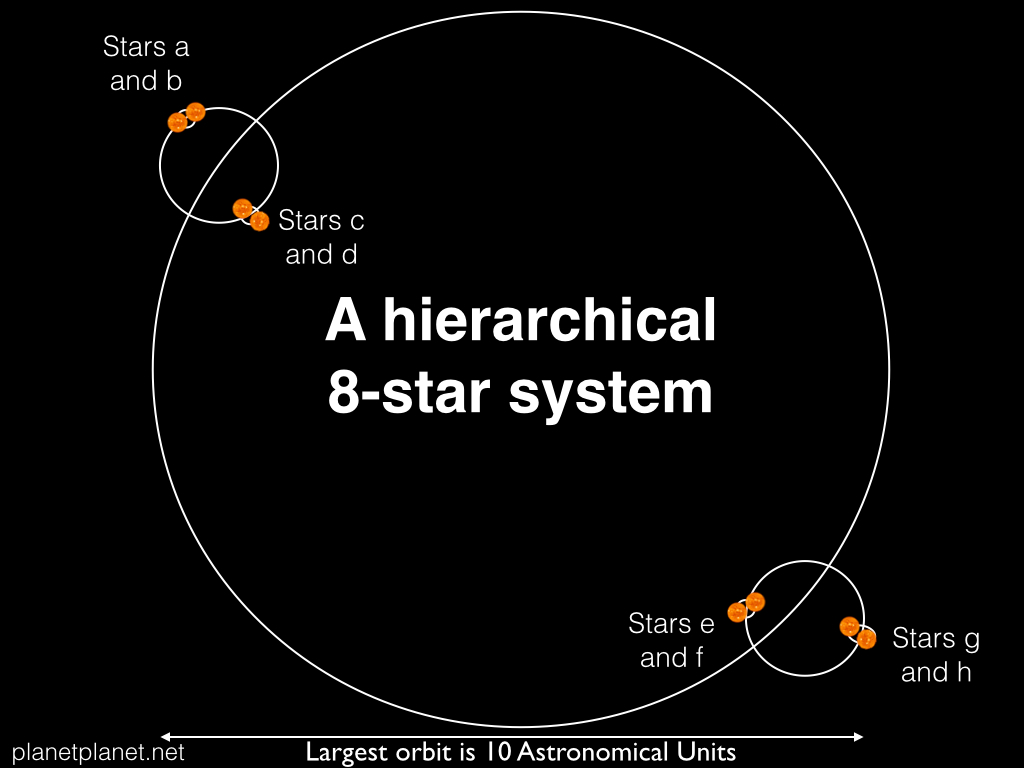 And you can substitute one of the levels of stellar binarity for planets: 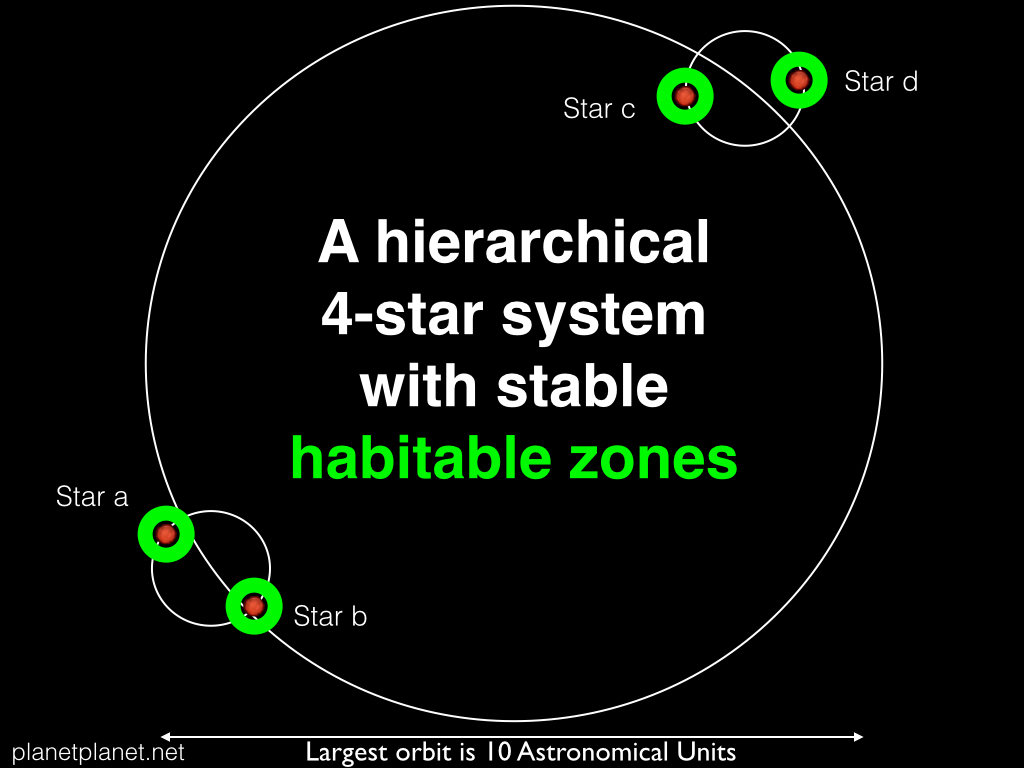 Those images are from a very packed system I created a few months ago: https://planetplanet.net/2016/04/13/building-the-ultimate-solar-system-part-6-multiple-star-systems/

Here is another example with one planet and 5 Suns: https://planetplanet.net/2016/03/22/an-earth-with-five-suns-in-the-sky/

With an O-type star in the system, you're looking at a stellar lifespan of 10 to 100 million years, which places some pretty severe constraints on the formation time of the planets around the other stars. Is the system artificially constructed?

Not the answer you're looking for? Browse other questions tagged orbital-mechanics solar-system or ask your own question.

5
Can this planetary system remain stable?
6
Could life develop in this ternary sytem?
2
How long is a solar-solar eclipse in a Binary Star System?
5
How would a colliding binary affect its planetary system?
14
Radiation Levels and Effects on Planet with 27 Suns
4
A Stable Red Giant Trinary System
2
Is it possible to make a stable planetary system like this, and what would the orbits have to be?
2
Can periodic gravitational tug and pull of binary star ensure that a planet stays extremely tectonically active?