How can anthills use tools?

The idea of a collective consciousness (or anthill) species is pretty simple; instead of cells tissues and organs you have ant-like creatures, all making up a larger creature. This is different from a hive mind in that the individuals of the mind are not sapient, only the collective is.

As I design this species and their culture, I realized a problem. Since they exist as a mass, they cannot use tools in the way we do. They are able to finely manipulate objects even better than us, but I cannot figure out how they could use tools such as hammers, or pickaxes. This creates a problem of them getting into and past the stone age and thus into civilization. How can an Anthill species be able to use tools?

Keep answer regarding the realism of anthills here

Tools are for big, singular organisms. The anthill has much better solutions.

Want to attach one piece of wood to another? Have each ant carve a tiny indentation/extrusion into the piece so they lock together perfectly. Or have each ant collect some sugar-water or tree sap and deposit it locally.

Need metal? let each ant collect a tiny bit of ore, and collect it all, and process it in tiny quantities.

Imagine if our carpenters and smiths and stonemasons could disconnect each cell of their bodies and let the resultant mulch flow over the raw materials, with each cell working on a tiny piece.

The only exceptions I can think of are when a large amount of focused force is required (eg. to break rocks apart to create flint), or when the raw material is too tough to carve with parts of your body. In the first case, the anthill should construct a single tool larger than itself (for instance to use gravity). In the second case, it can create little body extensions for the individual ants. These are tools on the ant scale, so they should be so easy to use that no intelligence is required.

Why wouldnt they be able to? Ants use their bodies to form bridges like this: 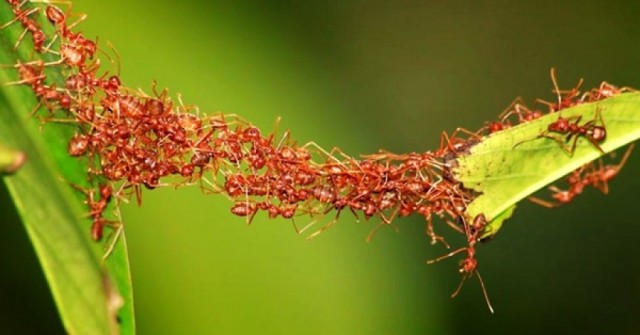 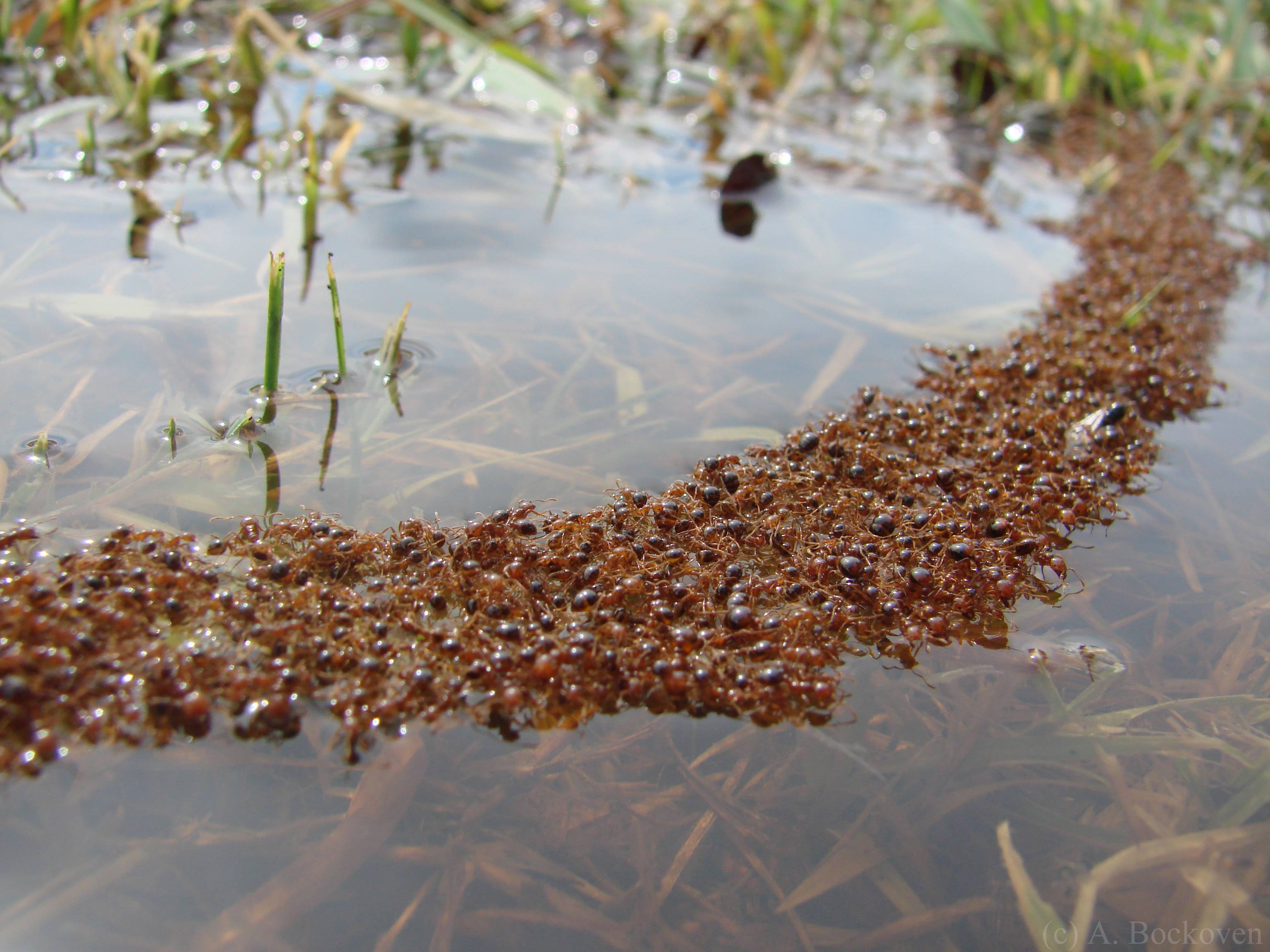 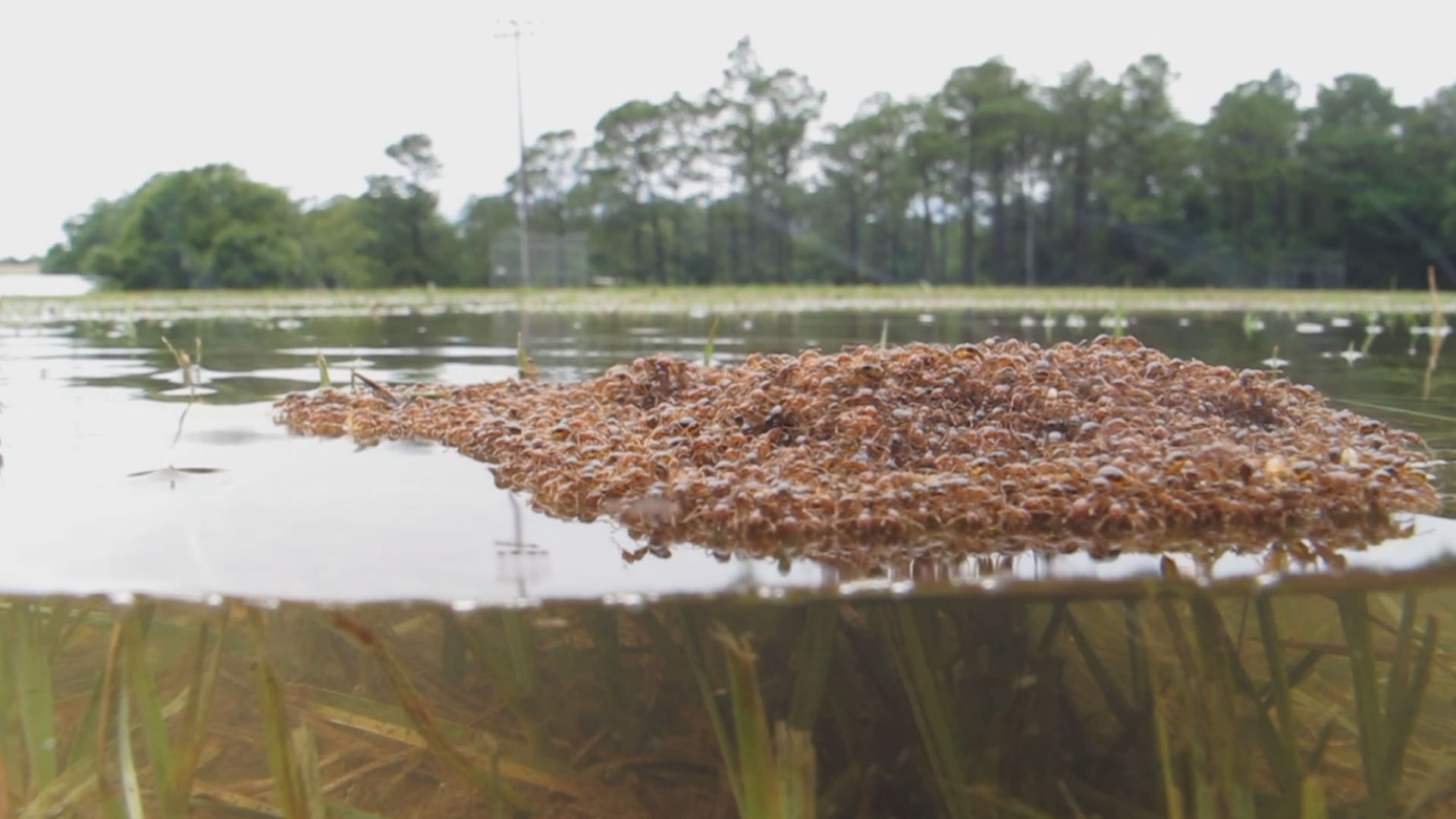 So why not swing a hammer? With enough numbers, they can accomplish just about anything.

I recall a movie where alien bugs would take the skelleton of a dead animal and essentially animate it. They were less formidable without the bones, as with it they had leverage and could apply strength in the manner of large animals.

So look at some of Keltari’s photos, and imagine the bridges evolve into muscles and ligaments.

After all, how can eucaryotic cells use tools? Yeast can't swing a hammer, but what about multicellular organisms makes that possible?

Also, look at the 2015 movie Ant Man, where the hero had ants help him.

Since there would (probably?) be no human-designed tools lying around, your anthill species would design tools fit for their own use - which would likely look very different.

I imagine if they have need to manipulate big objects (for example to make a furnace, which you can't simply scale down to ant-size), the invention of the pulley system would be hailed as one of the biggest early achievements. Extract strong fiber from plants or animals around you, chew(?) some bones or wood into pulleys, and go to town.

What anthills could lift/move directly this way would be somewhat limited by friction (can't just have a fishing line over 100 pulleys pulled directly by ants), but there could be a step-by-step upscaling - ants pull up weights with what they can do with pulleys, those weights get bound together and attached to thicker ropes on bigger pulleys, lifting up bigger weights... until you can lift or move the item that needs lifting or moving.

Mechanical knowledge in general would be useful - you can make gears from bones/wood and build a hammering/pickaxing machine powered by a platform or basket filled with many weights of ants-with-pulley-system liftable individual sizes.

It's a lot more effort than simply having a 5-6ft naked monkey swing a stick with a rock on the end, but it's doable ;)

If your ants are intelligent enough to consider tool use, could they not barter/bribe other animals to wield large tools for them, for a price?

Spelled out by stationary ants on a table:

"One gram of gold dust for a fifty-pound sack of sugar. Are you game?
And no, we won't tell you where we get it from; we're Ants, not fools."

How can a tiny, squishy human excavate 15 cubic metres of material in a single move?

That's the Bagger 293, the heaviest land vehicle on the planet. The size comparison is pretty apt.

Why would ants use such innefficient mechanisms as our tools? If they needed to do the same job we do with a hammer, they could use a scale equivalent of a pile-driver. If they needed to crack rock, they could use the same techniques humans use, like putting water into cracks and allowing it to freeze, inserting wooden wedges into cracks and adding water, using chemical explosives, steam-driven picks...all kinds of options.

The problem is only that you're thinking of tools on human scales. There's no reason to think that smaller tools couldn't do an equally good job, or why bigger tools couldn't be manipulated by small creatures - as long as the tools were designed for them.

Not the answer you're looking for? Browse other questions tagged reality-check tools .

28
Could Wasps and Ants reach the stone age?
16
Is the Idea of a Collective Consciousness Realistic?
6
Is it plausible that current insects will evolve sapience?
5
How can I design spacesuits for Anthills?
2
What would be the best members for a collective consciousness?