Is there an upward limit to the size of spacecraft with "Centrifugal" gravity?

I'm in the middle of creating a RPG one-shot for some friends, and I'm thinking of doing an Aliens meets Space Hulk style "Big-Gribbly Aliens VS Humans" game.

Is there an upper limit to the size of a craft with centrifugal style gravity? I've only ever seen them in fiction presented with single floor pods or rings around a central hub. You can obviously get more floorspace by creating a cylinder around the central spire, but could you go out and create more floors?

If so, would this alter the relative gravity per floor, and by how much?

That is certainly possible, and enough science fiction settings cover them.

"Up" will always be towards the spin axis, but the little changes can make you dizzy.

So the direction of movement on the same deck changes the felt gravity.

Up to 16km radius is doable with usual materials. Conservative with old steel (1920) 3.2km 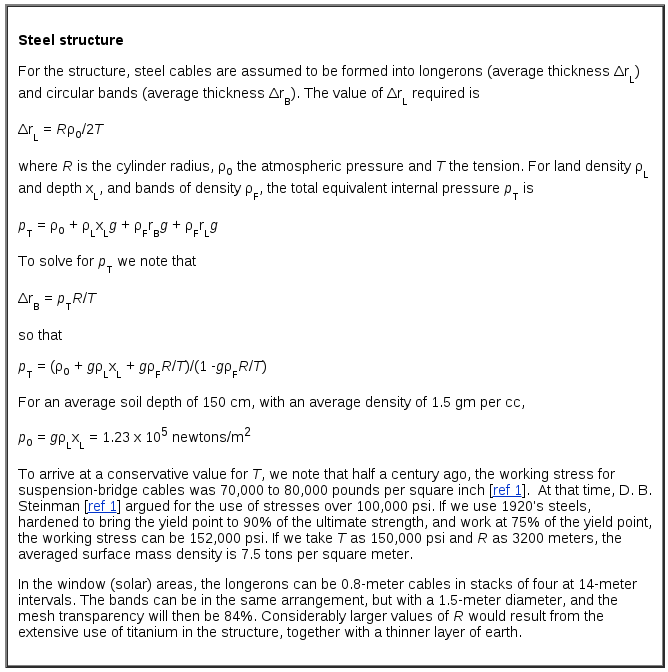 One foreseeable development is the use of near-frictionless (for example, magnetic) bearings between a rotating cylinder and its supporting structure, which need not be spun. For eight tons per square meter of surface density and a tensile strength of 300,000 psi, R would be 16 km, the total area would 50,000 km2, and the population would be between five million (low density) and 700 million (the ecological limit, the maximum population that can be supported).

This is with common materials, with 1g, and normal pressure.
The internal pressure of air is a big part of forces, and if it will be 1/3 of normal (used in some spacecraft's), and 1/3g (mars like) - it will be bigger, 3 times at least.

But that's still not the limit, but probably good enough for the size of a craft with centrifugal style gravity.

A rough estimation of limit is actually external structure and it's ability to hold 1bar pressure. And roughly there is a linear proportion between thickness of walls and radius of cylinder, more complex internal structure of cylinder also may help (remove pressure of air stress to walls - tethers inside with central axis - so making cylinder itself more robust helps)

The cylinder is more limited with the material strength we have and the amount of that material, and our wishes to move so much material.

Here is some NASA stuff, about choosing sizes, masses of possible habitats, crew. It's from Space Settlements: A Design Study broader and more practical overview of that topic.

Tom McKendree came the conclusion that an O'Neill-style cylinder constructed with carbon nanotubes could have a radius of approximately 461 km.

Quoting the above (footnotes omitted):

The maximum radius of such an O'Neill style colony is limited by the hoop stress of the spinning structure, and the tensile strength to density ratio of the material. The formula is

Where R is the radius, g is the acceleration of pseudo-gravity at the rim, and G is the density. [Molecular nanotechnology (MNT)] offers a 5 x 10$^{10}$ Pa tensile strength. Using the design rule of 50% safety factors for O'Neill style colonies, a 3.3 x 10$^{10}$ Pa design tensile strength is reasonable. The associated material density is 3.51 x 10$^3$ kg/m$^3$. One goal of the architecture is for g to equal 9.8 m/s$^2$. This all gives a possible space station radius of 9.6 x 10$^5$ m, or nearly 1000 km. For comparison, the corresponding feasible radius for titanium is 14 km, and even at its ultimate tensile strength with no safety factor, the titanium limit would be 23 km.

At the 9.6 x 10$^5$ m radius, the entire available strength (at the safety factor) of the MNT-based material is being used to prevent the rotating structure from bursting, and there is no strength left over to hold the space station's contents, including an atmosphere. To do so, a lower radius must be set.

In the section immediately following, McKendree arrives at a radius of 461 km when atmosphere and fixtures are accounted for:

One can directly solve for the structure radius where the shell is 5000 kg/m$^2$. Using MNT materials, the structure will be 461 km in radius. For comparison, the equivalent number for titanium is 6.6 km, or for a titanium shell is at its ultimate tensile strength with no safety factor, 11 km.

A number of sci-fi space colonies use the rotating cylinder concept, with an implied diameter of a few kilometres. For a 3km radius cylinder, Earth-like gravity would require a rotation rate of about 1 spin per 110 seconds. Rim speed for the cylinder is a bit over 170 m/s.

Apparent gravity variation is directly proportional to the radius, so a few tens of metres up or down out of 3 km isn't going to make a huge difference.

The Ringworld (also echoed in the Halo game concept) uses a giant ring millions of km across. Rim speeds are ridiculous, and material stresses in the ring would be infeasible in real-world materials.

Yes. The material strength needed goes up with the radius. Eventually you can't hold it together.

You can create a modified version, though--the strength is all in an outer non-rotating shell, the station rotates within this on a maglev system. Even this will eventually reach a limit as you can't support the floors (just like there's a limit on how tall a building you can build.)

7
Is an artificial gravity room on a modern spacecraft or space station feasible?
6
Is the size of a portal going to limit the propagation of gravity through it?
1
How would gravity and centrifugal force interact in Dyson constructs?
2
can spacecraft heat be 'vented' with entangled particles?
1
how to get around a centrifugal force gravity ship
4
Is there a correct way to describe delta-v for a relativistic spacecraft?
4
How does a spacecraft function despite it's own (non-centrifugal) artificial gravity?