Note that, if needed, I would be fine with very different conditions from the Earth.

If this is possible, how could it work and could the world be survivable to humans?

EDIT: I only care about an ecosystem that never touches the ground. I don't need there to be no other life on the ground.

If you're okay with something extruding from the ground, rainforest canopy ecosystems have little contact with the ground, but still require the trees to bring nutrition up to the canopy. The main issue with nothing touching the ground is that there is no way for dead stuff to come back up, so you end up with a big pile of compost on the ground and some basic organisms that can sustain themselves on aeroculture alone.

A less survivable environment for humans, and probably not very friendly for human life, are atmospheres with thick clouds. Maybe there's no ground at all. You should take a look at hypothetical life on Venus or gas giants. Take away the noxious fumes and the heat and you may have something livable for complex organisms.

The solid surface of the earth

Ok then. Just put it on a different planet.

But on all seriousness, put your ecosystem in the ocean, or on a gas giant.

Phytoplankton get sunlight, fish get phytoplankton, and sharks get fish.

Larry Niven's Smoke Ring series had an ecosystem, complete with photosynthesizers and heterotrophs, that had no ground that any of them could possibly touch. The atmosphere was a torus in orbit about a neutron star.

Kirkus' review of The Integral Trees summarizes the concept. The world was more-or-less successfully colonized by humans.

For your entire ecosystem to float in the air, you obviously need a mechanism that keeps all the necessary components up there. Since the complex molecules that make up life are more dense than the gases making up "air" and most biological processes need liquid water which also is a lot more dense, those components tend to fall down to the ground or wherever gravity pulls them.

The most plausible way for living beings bigger than a cell to maintain buoyancy would be to feature blisters or balloons of Hydrogen.

Helium is unlikely to work since it's inert and would need to be captured directly from the surrounding air. If there is enough Helium in the air mix to capture it easily, it's buoyant effect will be much smaller. Hydrogen can be extracted from water present in a much denser air with electrolysis or some other fairly simply chemical process.

So, anything living can stay afloat, but if it's damaged or dead, it will fall down. New generations would hitch a ride on the parent until they achieve their own buoyancy, so that is not an issue.

The major problem to solve is how to get back all of the heavy molecules that fall down, out of the ecosystem.

There are two sources of heavy molecules that I can see:

Humans would have a very hard time surviving in this ecosystem (without their own balloons/flying devices).

The first problem is that humans are heavy, with a density like water, about a thousand times more than air. They'd be limited to the biggest floating structures and risk tearing right through any spot that's too thin. Still, it is possible for a large enough bunch of balloons to support humans.

The second problem is that humans need lots of water and food to power their metabolism and especially brains, while the entire ecosystem needs to make do with very little of either.

Water would be available in small quantities from rain or clouds, but since collecting a pool of water would force a floating lifeform to sink, there are not likely to be any pools available.

Food may or may not be a problem, depending on how edible the bigger floating lifeforms are for humans. But eating the float that keeps you up there is not a long term solution. Humans would be dependent on being able to reach different floats before their food and water run out, which pretty much requires some kind of flying device, unless the number of big floats is such that they keep bumping into each other.

A more exotic way to support the flying ecosystem would be to have particles with some kind of anti-gravity effect.

It might not be pure anti-gravity but some kind of magnetic interaction (like in the movie Avatar) that forces the particles or lumps of matter containing them to rise up from the ground. This would allow for heavier-than-air materials to get and stay up in the ecosystem and would generally make it more "normal", since you just insert the needed quantity of antigrav material into any object you want and it will stay afloat. You want an island with a lake and a castle? No problem. You want a floating mountain? Go ahead.

While you could have a large proportion of your ecosystem entirely airbourne, it's not a full ecosystem, there's a chunk missing after death. It's said that swifts won't land for the first two years of their lives, and the concept of a bird that never touches ground has been discussed here before.

Let's consider the other available 3 dimensional ecosystem, the ocean. Based on plankton rather than plants, it should be possible to make something equivalent airbourne. It turns out you don't need to do too much work as the insects already fill this space (Bumblebees have been found at 18,000ft on Everest), you just need to create an airbourne photosynthesiser in the same style as phytoplankton. Match these with the insect eating swifts and what you need next is a predator that can eat on the wing. This is harder, Harris Hawks can catch food in the air but usually they land to eat, however a bald eagle has been caught on camera eating in flight.

That's all the eating and sleeping dealt with, but reproduction on the wing is an entirely different game.

Airbourne humans will need to use lighter-than-air flight rather than aerodynamic flight as the latter would be too power intensive. This creates airbourne platforms and takes a lot of the fun out of getting high altitude photosynthesis, so you'd have to consider whether this ecosystem was actually dependent on humans or already evolved when they got there. It would also be hard to get large plants for wood, or metals for any heavy industry or manufacturing to high altitude, so consider what their airships are made of if landing for raw materials and manufacturing is not possible for any reason. 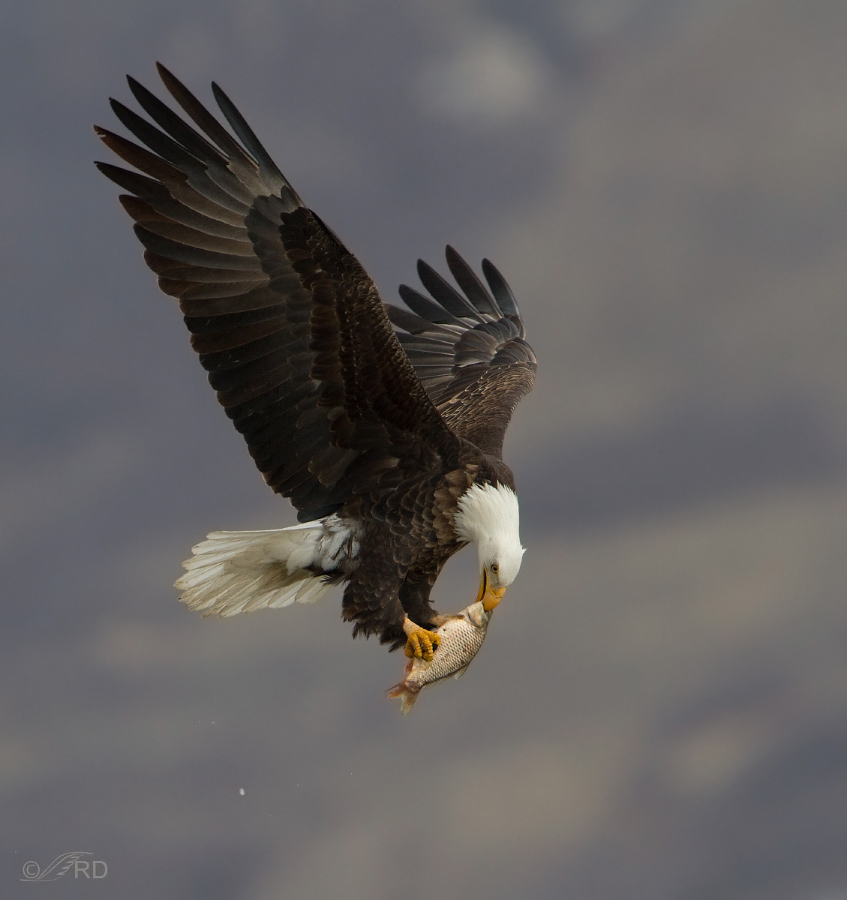 Jasper mentioned the Smoke Ring books by Larry Niven which does indeed present an ecosystem with no real ground. The other option, also from Larry Niven, that could include an ecosystem that really never touched down would be the Megasphere from Bigger than Worlds with the core of a galaxy on the inside and a breathable atmosphere light-years deep supporting a micro-gravity biosphere on the outside the ecosystem would be entirely composed of fliers of one type or another, you could fly to the moon on gossamer wings or take a chariot pulled by swans if you didn't want the workout.

59
A Bird that Never Touches Ground

59
A Bird that Never Touches Ground
6
High-Altitude Life?
14
Heavy water icebergs
1
The soil of mushroom island
7
How would an ecosystem based around chemotrophs produce oxygen?
12
Feasibility of floating city-sized forests
7
On the viability of living balloons
12
Would a flying superhuman leave a contrail behind?
14
Could a creature carry its own biome and be self-sustaining?
23
Can I set fire to the rain?