Where to put Stargate Command?

While rewatching the first episode of Stargate SG-1, I realized again, that it might not be a good idea to put your secret portal to other planets right under your central air command bunker.

An attack through the stargate could not only give the invading aliens a defendable beachhead. It would also destroy the current command structure and could thus slow the response time of our air force, when a full-time invasion hits.

But where would we put such a teleportation device, to explore the galaxy?

Assuming the device would work similarly to the TV-Series, so it would need a lot of energy, and we have no other alien technology, other then the stargate itself.

So we would need some kind of infrastructure, where people working on the project could live and where research is done. The stargate is secretly owned by the US, without the knowledge of any other county.

I'm seeing three possible threats at the moment which should be addressed:

Admittedly, for point 3, acceptable distance to and size of population center may vary. In the show, they mention at least once they have closed the surrounding area due to "chemical leak". I don't remember they ever mention including Colorado Springs in a quarantine zone.

To be fair, I've watched the show a lot, I never catch they had a 450k city sitting 15km away.

Area 51 would be a good candidate as well. Reason #4 maybe wouldn't hold as much, but to counterbalance that, the base has a perfect cover. If anyone were to say "Area 51 is home to a super secret military project that explores other planets and fights aliens", that'd sound like a conspiracy theory from the 1950s.

It's probably why they stacked their alien artifacts there in the first place, because reasonable people won't lend any credit to Area 51 conspiracy theories.

Create a cover story for something that needs a lot of the same resources: huge amounts of underground excavation, many miles of superconductive magnets and infrastructure for same, computing resources, etc. That sounds like a collider, but on an unprecidented scale: a superconductive super collider! You also choose a site good for underground chamber making and free from seismic activity, just as for building a collider.

People see the published (cover) specs, and see how much chalk and shale is coming up, and assume that you are making a huge circle tunnel, but a large chamber with several small tunnels have the same volume of digging. Be sure to design in an access hatch by which a huge wheel-shaped instrument can be lowered later. 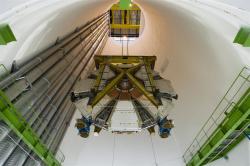 Then, when money is spent and the needed work is done, you cancel the project. You skip hooking up the huge power feed to the huge intake you built, never running power lines into the area, so people assume the site really is dead—nobody knows about the off-the-grid Naquadah reactor.

The newly discovered high-temperature superconductor material — this “invention” had to be leaked to general scientific community in order to provide for industrial quantities to be manufactured — turned out to be fatally flawed for the supercollider usage, as it is not only brittle but can't handle the stress of the magnetic field it was made for. This fiasco was the very excuse for cancelling the project with such high sunk costs, and everyone in the scientific community can see for themselves that it is true and repeatable: they crumble like dry soda crackers, and only handle a fraction of the magnetic strength predicted in theory and extrapolated from small samples.

But, it is all a ruse. The use case is actually different from what the public thinks, and a stabilizing coating was kept secret and not revealed with the material proper. The 80 killometers of superconductor is safely stashed in the hole, refit to its real purpose.

So, I conclude that the place to put the stargate command is near Waxahachie Texas.

Finally, as a disinformation campaign to camouflage and repudiate leaks, create a TV show with the same rough premise, but campy and differing in actual detail, including the use of a high-profile location for the command center.

it would need a lot of energy, and we have no other alien technology, other then the stargate itself.

The original plan was to use a reactor from an aircraft carrier, with additional cover stories about “loosing” one. But small Naquadah generators were discovered on early missions and easily scaled up.

[cover for] An alien Invasion by the Goa'uld

People already run around in strange costumes, and this started in 1981. This was just 2 years before the SSC project was publicly endorsed, about the time it was first planned as a cover. In fact, it was itself a cover story for a camp of relocated offworlders living with medeval technology. The newspaper was told “oh, they're re-enactors (or larping)” and everyone decided to join in. The large movement of people through the normally rual area was an initial lure to do more project-related activities there.

Somewhere not too obviously suspicious and it should be logistically feasible while having a place where massive energy usage doesn't draw unnecessary attention.

It should also be a place where regular people don't find it abnormal that a section of the facility has restricted access.

Also, the cover should be large enough so that a lot of human traffic is deemed normal. A 100+ people leaving a local bakery on a daily basis is going to be suspicious.

I'd still put it in a military grade bunker deep below maybe ...

Given the number of long shot survival scenario's that resulted during the TV show, and accepting that even though lots of alien technology was acquired, none of it ever got out to the public where it could do real good, there is only one valid conclusion...

The Ancient Egyptians had the right idea! Bury it.

However, we have now better options than a big cover stone. We can sink it into a vat of concrete or molten steal. ...or since the OP has asked for a specific location...

We could set it up in the lowest level of a nuclear waste storage facility.

That way, when the Goa'uld send in their troops, we don't have to fight them. We just let them cook in the radiation for a while, then send in a properly shielded team to recover their high tech weapons and armor.

I originally wrote this with a tongue-in-cheek attitude, imagining a reboot of the Stargate franchise where the characters came to this conclusion, causing the long-running multi-thread storyline to reboot into a single episode, half hour short with no hope of a sequel.

But the more I think about it, a nuclear waste disposal site isn't a horrible choice. Operate the Stargate as in the series, but keep it housed in a properly shielded, lead-lined chamber within the basement of a disposal site. Then, should the enemy ever establish a stronghold, you can press a button which slides the shielding out of the way and cook the invaders.

You need a place that: Won't raise too much suspicion.

Would need to be underground, otherwise it's visible from space (Russian/Chinese/North Korean Satellites)

Would need to be defendable, and self destructible.

As such a military base somewhere in the desert would work.

I see most people talk about high people traffic, but we have no idea what happens inside a military base, so as such, having say 20 teams of 4 people embarking on missions + 100 more for backend operations doesn't seem too much. And as long as you have them mostly on base, there's not much traffic going in/out of it.

Since it is very likely that you will have to nuke the structure at some point, I would place it in an a-bomb testing area. As the Bikini Atoll seems to be too far away from the US mainland, I would suggest the Nevada Test Site https://goo.gl/maps/pKn879JW8iJ2 which is very close to Area 51.

That way you could use a restricted area that can easily be connected to existing infrastructure and when you have to nuke it, you could say it was another test or part of an old bomb which didn't detonate.

Thinking from the alien invasion point of view, I'd want to put it somewhere that's a long way from civilisation and is surrounded by open, barren terrain. Some options would be:

40
A realistic option for enclosing a geographic area

110
Would intelligent life evolve any other body plan than humanoid?
36
Economic reasons to put people on Mars?
7
What's a plausible explanation for a space faring civilization with a "16th century" culture?
23
Create a disease that can easily be cured by adopting a custom from another culture
22
How to put a lake on the ceiling?
8
A world without fire - what will the military use as their main soldier level weapon?
0
How does a government handle a large number of people disappearing that are anticipated to return all at once at some point in the future