How Much Damage Would a Starship Crash Really Cause? [closed]

Ask Question
Asked 4 years ago
Active 4 years ago
Viewed 645 times
2
$\begingroup$
Closed. This question needs to be more focused. It is not currently accepting answers.

Starships are big. Big things moving at atmospheric entry speeds do not bode well with planets. If a bus-sized asteroid can cause massive damage to an entire city, how much can a cruiser about 30 times the size of a bus with a powerful nuclear reactor do? It definitely isn't pretty, and that's a cruiser, forget a dreadnaught about 5 times the cruiser's size.

So, redundance for clarity's sake, how much damage could a starship really do if it crashed on an inhabited planet? A certain battle in my sci-fi story takes place partially in a massive dust storm kicked up by a starship crash relatively nearby as a result of the battle in space.

If you tied 30 American school buses together and set them moving at a typical earth orbit speed, you would have 300 tonnes of matter moving at 10 km/s. A crash would equivalent to 3.5 kilotons of TNT. About 1/4 Hiroshima.

If instead of 30 school buses, you used one Ticonderoga class missile cruiser, the kinetic energy would be equivalent to 100 kilotons of TNT - about seven Hiroshima bombs.

The Vis-Viva Equation allows one to to calculate the velocity at one point in an orbit, given the highest point of the orbit.

The radius of the Earth is the lowest point of the orbit, where the ship touches the surface. That is 6,371,000 meters from the center of the Earth.

The calculator I linked to gives the "standard gravitational parameter" a value of 3.986004418e+14 m^3/s^s for Earth. Wikipedia provides a list for other planets.

The calculator then gives a velocity when the object touches the ground of 10,039 m/s, which I'll call 10 km/s.

We can then plug the number into a Kinetic Energy equation and get the number of Joules of energy that will be converted when the object comes to a crashing halt. Since we kept the numbers easy, the result is 15,000,000,000,000 Joules.

And finally, the "Little Boy" Hiroshima bomb had an estimated yield of 15 kilotons.

Ok, lets do the math for various different speeds.

First, lets see what happens when we crash a naval ship into New York at different speeds.

30 double decker busses have a volume of about 3375 cubic meters.

So I'm going to work with a ship with a similar displacement, Type 051 destroyer, Displacement: 3,670 tons

Lets look at the 2 extremes.

A ship this size in LEO re-entering the atmosphere is carrying a mere 1.013×10^14 joules of kinetic energy or about the same as a 24 kiloton nuke. Most of that would be dissipated in the atmosphere as heat during reentry. I wouldn't want to be too close to the point of impact but it wouldn't be too bad.

Interstellar battle at 0.1c, the dead hulk then plows into a planet.

If it hit New York the calculators for nuclear weapons break down, seeing it's glow as it hit atmosphere would likely blind you and it might just bust through the crust of the planet. That much energy released as a nuke would look like this: 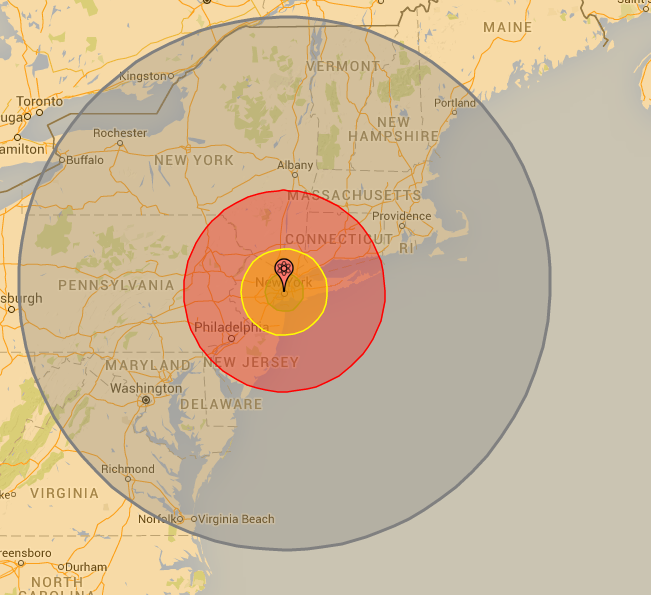 but at those levels it's hard to say much since it wouldn't detonate like a nuke though it's safe to say that most people in the orange zone would be very dead.

Pick something between the 2 depending on how big a bang you want at the impact site.

how much damage could a starship really do if it crashed on an inhabited planet? A certain battle in my sci-fi story takes place partially in a massive dust storm kicked up by a starship crash relatively nearby

Normally you wouldn't get a dust storm; a crashing starship at orbital speed (which for LEO is around 7.6 km/s) would have effects similar to a small nuke, depending on its mass. Thus, a fireball and overpressure front.

Depending on propulsion, it could have effects similar to a not-so-small nuke; the engines and reactors would probably have an almost fault-proof and disaster-proof scram mode to avoid an unlucky hit turning into a catastrophic kill, and there's plenty of time for scramming on the long way down (even at 11 km/s of terminal velocity, you still need half a minute from low Earth orbit to the ground). Even so, what's not catastrophic in space could be in an atmosphere capable of conducting a concussion/blast wave as well as oxidizing fuels. Again, larger fireball, possibly radioactive fallout from the equivalent of a dirty bomb, and other effects of onboard unsecured ordnance.

I suppose that a starship might be equipped with deflector shields engineered to deflect incoming stardust. They would probably do so by charging the stardust electrostatically and confining it electromagnetically, somewhat akin to a Bussard ramjet. If the electrostatic part did not scram on impact and continued operating on the surface, it might kick off a sort of dust storm from Hell - similar to Clarke's lunar haze but on a far greater scale.

The same effect would probably play merry hell with electronics, creating an area where both the Eyeball Mark One and most augmentations would be unable to "see" clearly.

Not the answer you're looking for? Browse other questions tagged science-based warfare science-fiction explosions or ask your own question.

10
How much TNT do you need to blow up Mount Everest?
5
Would giant worms cause environmental damage?
12
How much hydrogen and oxygen can I add to an atmosphere before it explodes?
0
How would a character build an explosive from natural elements?
6
How much damage could a complete loss of technology cause?
2
How could damage reflection work?