Would it be possible for a corporeal alien with a solid physical body (it must be able to touch and interact with the world) to exist but remain invisible to humans?

My understanding of optics is that if a material doesn't absorb or reflect light in the visible range, it would be invisible to humans.

If so, what sort of alien alien anatomy and biology would enable this?

The problem with having an invisible alien in air is that there are no known solid or liquid substances that have a refractive index as low as that of air, thus no matter how transparent the alien, you would be able to see its edges and the distortion of objects through its body.

In water is another matter, It is conceivable that a colourless transparent alien may have a refractive index equal to that of water under certain conditions of temperature and pressure, so under these circumstances, the alien could conceivable be "invisible", or at the very least, very hard to see. However, varying the conditions would probably make the alien visible again unless it could also vary its own refractive index.

There are some species of water-dwelling life that are transparent and difficult to see because of this, however their eyes and abdominal organs tend to be visible, somewhat spoiling the effect.

So, Yes, an alien may be able to be "invisible" in water, but it is unlikely that it would be totally invisible. It probably wouldn't be able to photosynthesise, and given that it would probably have to eat to survive, it is also probable that its food would not be invisible, and therefore a gut-full of food would be a bit of a giveaway.

Since the creature is solid then just making it transparent is very hard, for the reasons already discussed.

The creature could somehow bend light around itself, as is being experimented with in various labs around the world right now. We already have materials that are invisible to some frequencies, so it's theoretically possible to do the same with visible light.

This is not true invisibility as it has to present the same image to all observers but it would be effective at reasonable distance. You re-colour yourself dynamically to match your background. The chameleon does this but quite slowly, there are much faster and more dynamic examples though.

For example check out this animal: 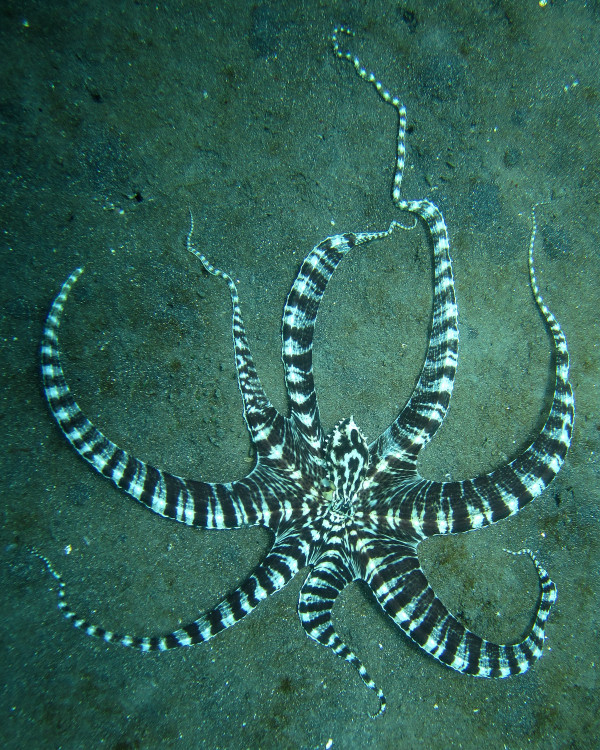 To see it in action watch this video:

It's not "invisibility" but it can make itself look like a wide range of different other animals.

Not only would the material the aliens are made of have to be transparent (neither absorbing nor reflecting), it would have to have the same index of refraction as the medium they inhabit, with no internal variation.

For a liquid medium, this seems implausible but not completely impossible. There are some transparent aquatic organisms on Earth which are fairly hard to see, but not outright invisible. They aren't perfectly match to the refractive index of water and the material that makes them "work" isn't quite perfectly clear.

The size of the organism is also going to be a factor. The bigger something is, the more of it there is to bend, absorb, or scatter light and the more angular area it occupies at a given distance.

For something like ordinary air, it's much harder. Density is a big factor in refraction, and liquids and solids are just much denser than air. The only way around this is with porous structures like aerogel, which has many internal surfaces to refract light (the solid parts of it are still much more dense than air and refract light each time it passes between that solid and the bubbles of gas or vacuum trapped within it)

A different index of refraction while otherwise being transparent will result in a creature that looks like it's make of glass or pure water.

A short addition to the other Answers:

If your life form is Invisible it cannot see itself in conventional ways.

The Theoretically impossible Creature needs to have some psychic ability or senses that are not about "seeing". If you imagine your eyeballs and the iris / lens / retina is invisible how could it react to light?

Also if it is temperature sensitive keep in mind that temperature is visible in some other kind´s of light spectrum, this would also make a reaction with light.

And to a good end. If your creature has mass, it reacts with light. So to make it Invisible you just have do eliminate the mass. Don't know if the mass of a creature is big enough to bend light but i can imagine it is enough.

EDIT: ok the i checked the Last paragraph. I found This on the Internet.

The mass of the sun is enormous but the measured angular deviation was only about 1.5 arc seconds, 0.0004 degree.

So the light bending by Mass of a creature is not really measurable.

It looks like everyone else has used the usual definition of "see" - using reflected light to visually locate an object. There are many other ways that animals "see" the world around them, though: bats and dolphins, for instance, use echolocation; snakes have a type of heat-vision; spiders use tiny vibrations in the earth (or their web); many predators use their sense of smell to locate prey.

Visually, to become truly invisible (that is, unable to be seen in front of a variety of backgrounds, even when moving), a creature would need to bend light around itself. Even then, any distortion from refraction or absorption of light would cause shadows or edges that could be easy to detect. Furthermore, if an animal is truly invisible, then no light can reach its eyes; it would be permanently blind. Some sea creatures manage to be nearly invisible in water, but even then, their eyes and some organs are visible.

However, there are many other ways to become invisible. Sonar or echolocation use bursts of reflected sound to locate objects. There are two ways to appear invisible in that situation: absorb the sound waves, or cancel out the sound waves. Specially-engineered foam can absorb nearly 100% of sound, from almost any angle; that would provide passive invisibility. Active sound-canceling headphones record ambient sounds and play inverse waves to cancel them out. While sound absorption can (and is) used in nature, sound cancellation is much more complex, and unlikely to be used. However, neither of these would provide true invisibility; an echo against a wall will show an obvious "hole" where you have absorbed or canceled the sound. It may be enough to confuse some predators, but it wouldn't be true invisibility.

For a snake's heat-vision, you must be the same temperature as your surroundings; in warm weather, cold-blooded animals can approach ambient temperature. Warm-blooded creatures can mask a heat signature by sweating, or exterior cooling methods like submerging themselves in a cool liquid. The key is to match the ambient temperature exactly - even the smallest temperature difference is enough to break invisibility.

Being invisible to a spider's vibration-sense is much more difficult. Flying above the ground will cause drafts of air to make the ground move; even the beating heart of a tiny mammal provides enough vibration for a spider to pick up on it. Snails and slugs move very slowly, using fluid movements and minimizing impacts, and are probably best equipped to avoid vibration-sense.

Even if a creature managed to be truly invisible to light, they may still be completely visible through sound, smell, heat, or vibration, which means predators will simply use alternate means to hunt them. Invisibility is hard - but there are a lot of shortcuts. Instead of invisibility, most creatures rely on passive or active camouflage, or by "jamming the signal": squid squirt jets of ink to muddy the water, Bertholdia Trigona actively jam bat's echolocation, and many creatures mask their scent by rolling in dirt or all manner of other things. When it comes down to it, camouflage is a lot easier than true invisibility.

I would like to add another option to circumvent the problems depicted in the other answers:

The creature is not compact

For starters, think of thin cobwebs. They certainly match your definition of solid, as they are able to interact with the human world, but they are very difficult to see from most angles (which I can imagine to be important to their success). The reason is that the amount of light refracted or blocked per area is often below our threshold of perception.

All you have to do to achieve de-facto invisibility is take this approach to extremes with a creature that consists of sufficiently thin wires. Of course, this creature needs to be rather large in general, if it shall plausibly be able to do certain things. Also you need sufficiently strong components for it to not collapse under its own weight, but the cube–square law is in favour of this and let’s not forget about nanotubes.

Another similar approach would be a colonial organism, i.e., the creature is plainly not contiguous but consists of many very small components – think of an ant colony as a single organism.

Not the answer you're looking for? Browse other questions tagged science-based biology invisibility .

28
Is there any way to truly hide a spaceship?
18
Science behind a naturally invisible creature

3
What size and material are my miniature machines?
1
Changing the emission spectrum of the human body
13
What would be different if a person has broader visual spectrum than normal
11
Why would only negative mutations be inheritable while positive ones are not?
6
Making the God-Hand Make Sense
9
Developing a scientifically accurate species of dragon-like humanoids
1
Could an animal evolve iridescent horns that appear metallic like chrysina resplendens' chitinous exoskeletons?
5
Invisibility versus transparency. What is possible with plausible advanced technology?