Would life still be possible on Earth if its atmosphere suddenly became as dense as the Venusian?

Assume that the atmospheric concentration is still the same 78.09% nitrogen, 20.95% oxygen etc, except now just as dense as the Venusian atmosphere. Would humans be able to survive in this atmosphere?

We'd die very rapidly, because the pressure would be about 90 atmospheres. Oxygen toxicity would probably get us fastest, and nitrogen narcosis would ensure we couldn't do anything sensible. There are probably several other ways this would kill us, but we'd definitely be dead.

I agree with nigel222's answer. With much stronger greenhouse heating Earth would be doomed. In fact, if the solar energy received by the Earth were just 5-10% higher this would happen on its own (and is expected to in a few hundred million years).

It's interesting to realize that Earth has several different possible stable climates. Our temperate, habitable planet is just one of (at least) four stable states: 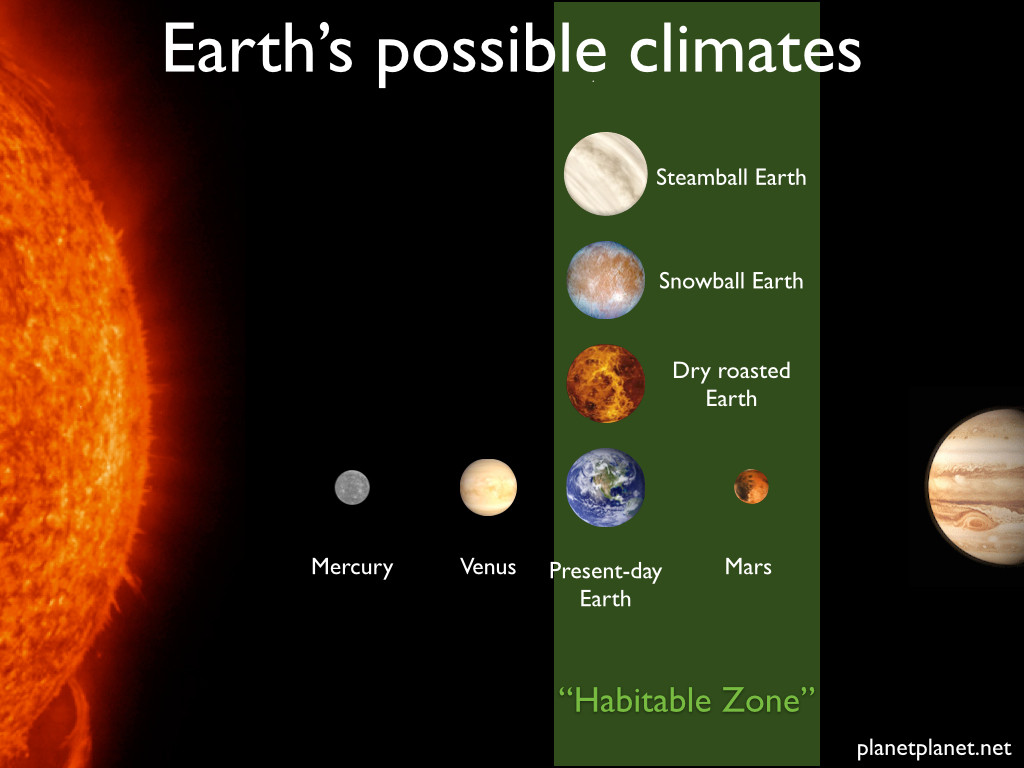 If we had Venus' atmosphere Earth would be a "steamball" planet. Alternately, if Earth were covered in ice, which is very reflective, the surface temperature would plummet and we would be a snowball planet (this is actually thought to have happened at least twice in Earth's history). FYI Venus is currently in the "dry roasted" state.

Rather than the full 90 atmospheres, if you dumped ~20-30 atmospheres of helium onto the planet, that might be OK-ish (divers would call this "trimix").

World-record SCUBA dives are about 300 meters (30 atm), but then issues of HPNS occur. More common diving ailments that John refers to are from breathing standard compressed air or oxygen-enriched air.

Extremely bizarre mixes also include hydrogen ("hydrox"), and this mix got a diver down to a simulated 700 meters (in a chamber). Flammable gases require a certain mix ratio with air to actually burn: too much and it actually won't light. So maybe(?) the air wouldn't explode?.

So maybe there is some mix of gases that would allow humans to actually live at 90 atmospheres. You'll probably kill a lot of people though.

That would be so hot!

No, seriously. The temperature of a gas is directly proportional to the product of its volume and pressure. Supposing you are increasing pressure like that, and keeping everything else the same... You'll roughly make the air 90x hotter than usual.

And that's counting from the absolute zero, not from F or C. ~27000 Kelvin is definitely not cool.

Just a minor edit: I am focusing on the suddenly word in the question. I am thinking of suddenly as instantaneously. Obviously such an atmosphere wouldn't last a minute. That is hotter than white-hot, and Earth would shine brighter than the sun. Most, if not all of the gas mass (and a lot of solids and liquids would become gaseous at that temperature, even at that pressure!) in the atmosphere would quickly disperse into space because each molecule would be moving faster than the escape velocity for Earth. A few minutes later and we would actually have no atmosphere at all. The surface of the planet would also be quite charred.

If John Dallman's answer hasn't killed everything yet, this one will take whatever's left.

Not human life, and most likely no complex life forms, but possibly some life at the extremes.

The Venusian atmosphere at about 50 km has pressure near Earth normal with temperatures of only 75C. not exactly completely hostile to all life. Extremophiles have been found living at greater than 122C.

Some extremophile bacteria may survive in the upper atmosphere or deep underground.

At least on Earth, life seams to survive most places, even those we wouldn't expect; the arctic waste, deep underground, undersea vents without light, everywhere we've looked there is some bacterial life present.

My first thought was deep sea vent life, but at the temperatures and pressures in play the oceans would boil so I think they would be dead too.

No. Earth would rapidly die. This because water vapour is a greenhouse gas.

If the planet warms, then once all the ice at the poles has melted the temperature stabilizes. If the planet tries to warm further, more water evaporates, more clouds form, more sunlight is reflected off the top of the clouds, and this more than counteracts the warming effect of the extra water vapour. It's a simple negative feedback loop and it represents the ice-free state of earth throughout most of the history of life.

The negative feedback loop turns into a positive feedback run-away once cloud cover reaches 100%. More water vapor in the atmosphere increases global warming which evaporates more water which increases global warming, until the oceans all boil and the planet has turned into a somewhat cooler version of Venus. Some airborne microbes might manage to adapt to life in the uppermost cloud-tops, but I doubt it.

The sun is getting hotter as it ages. This is the probable fate of life on Earth, many hundreds of millions of years hence, but well before the Sun goes nova.

Not the answer you're looking for? Browse other questions tagged science-based biology planets atmosphere survival or ask your own question.

54
If we put humans on planets with atmospheres different from Earth's atmosphere, but still containing oxygen, would humans be able to breathe?
-1
“Rich mix” methane/oxygen atmosphere on a planet — how would life develop?
5
Looking to optimize the atmospheric gas mix and pressure for humans for minimal cellular degeneration
4
Would this type of atmosphere be suitable for human life?
8
Are these atmosphere compositions for habitation in space plausible/do they cause problems I don´t see?
2
How much neon would need to be in an Earth-like atmosphere to tint it considerably orange/red?
9
If all life on Earth was exterminated, how long would oxygen remain in the atmosphere?
2
Atmospheric properties of a heavier Earth-like planet