Would a humanoid creature with pointed legs/feet be able to stand, walk/run and maintain balance?

Would this creature be able to maintain balance and walk or run without problems? If there are problems, what would they be and what would there solutions be?

If a creature like this evolved, the pointed leg would simply be a specialized hoof. The point can and likely will be segmented, why? Because the spike hoof would just stab the ground, if anything it would have more traction. Since you want them to be bipedal, then keep in mind that they would need to stab the ground in order to stay up (that or have balancing mechanisms; see further down). The concept is similar to the Striders in Half-life but not tripodal. 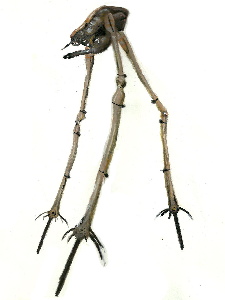 This means that their environment has am easily stabbable ground layer. Your options here are;

A creature with spike hoofs would obviously have a big problem with running, even worse than humans. They would not be efficient runners, long or short distance and would never be able to jump.

That is if you're dead set on having there arms be human. If your willing, there are a plethora of solutions to help balance.

Walking and running shouldn't be too hard, although jumping would be harder and acceleration slower. The creature would also not be able to absorb the hit like we do when walking/running.

Standing idle would be near impossible though.

When running this creature would have to tilt forward.

standing up would be very difficult without a support as well.

Not the answer you're looking for? Browse other questions tagged internal-consistency biology creature-design .

32
Are hoofed bipeds feasible?
10
Flight at supersonic speeds without an airplane
10
Would my horned theropod dinosaur- like creature be able to lift his head and/ or balance?
7
Anthropomorphic flying squirrel, gliding capability
0
Humanoid hummingbird
10
Could my "erect penguins" exist?
3
Could a human sized creature with a skeletal structure similar to a gibbon's be bipedal?
1
I am making a creature with sloth like claws and need to know how it would be used for climbing trees and walking
3
Would tall arboreal humanoids make good swimmers?