Species and Race diversity and names

what are the rules I need to follow to name different races of a specie and different species that have one ancestor in common ?

Additionally how do i know when a race becomes a species ?

Is an humanoid primate predator with a giant mouth and shark teeth , eight large eyes. has over human intelligence ,incredibly agility and strength. Reproduces asexually but can mate with people too. This animal evolved particularly to hunt other humans.

Can this creature be considered a different race of homo sapiens or is a new species ?

This ''shakrtooth'' humanoid arose from an oppressed tribe victimized by a virus that mutated every cell of their body. This tribe survived for centuries by feeding on dead soldiers cause there was no other source of food. 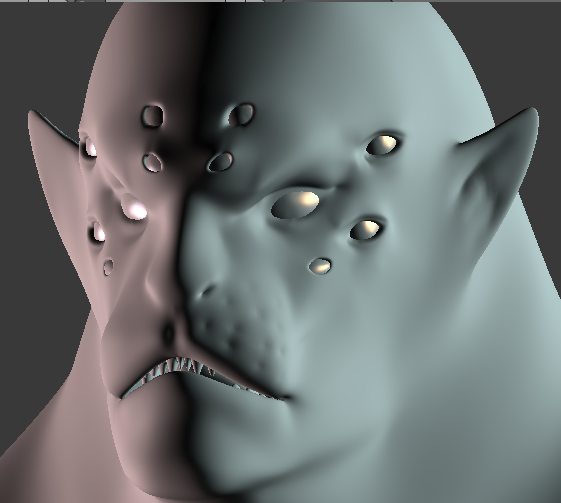 Sorry for the image but I'm not the best at sculpting....

The rules for naming species go along these lines:

When a race (or subspecies) becomes a species: the definition of 'species' for sexually reproducing creatures is a naturally interbreeding population which can produce viable offspring, which in turn can interbreed to produce viable grandchildren. So horses and donkeys are separate species (both in Equus genus) because they don't interbreed naturally - people are involved in getting them to mate and create mules. Also nearly all mules are infertile, so there are no grandkids.

That said, features such as giant shark teeth, 8 eyes and so on sound like massive amounts of genetic change! If we found something like this in the fossil record, palaeontologists would invent an entirely new genus for it, because it is just too radically different to be put in genus Homo with us, the Neanderthals, Homo erectus, and so on.

In fact they'd probably invent a new family or order! After all, it is the only mammal on the planet with 8 eyes!

How far back do you want your common ancestor of humans and sharktooths to have existed? Our own species is quite young - probably only been around for 300,000 thousand years. Genus Homo has been around about 2.8 million years. If they've been around for more than 2.8 million years, they will not be genus Homo, and not that closely related to us. Perhaps they evolved from Australopithecus or some other 'apeman'?

Given the large morphological differences, offspring of human/sharkman breeding would only be viable if they take strongly after one parent or another, ie they are either sharkmen or human or stillborn. So ability to breed successfully here implies that genetic difference is much smaller than difference in appearance suggests. Thus the sharkmen would be human, IMHO.

Since they are morphologically distinct (and breed true), I'd go with subspecies status.

Sorry to be vague, but species definitions are kind of fuzzy and when applied to fictional species...

11
Karyotypes of partially interbreeding human races
8
How would early Homo sapiens and a humanoid marsupial interact?
6
How to delay agriculture to allow for additional evolution?
7
What factors would allow this caninoid species to evolve successfully?
7
Why would males exist in species with hermaphrodites?
12
What kind of environment would favor hermaphroditism in a sentient species over regular, old sexes?
11
To what extent is it feasible for this race to be majority female?