What phonemes would a snouted animal (e.g. dog or cat) be able to pronounce?

Assuming human-style vocal cords, what phonemes would a snouted animal be able to produce? I'm looking at developing a conlang (or several) for a setting, and it has several humanoid species with protruding muzzles. I can think of a few phonemes that can be ruled out immediately on the basis of lip immobility (/f/, /v/, and /w/ would be right out), but beyond that I'm kind of stumped.

(For what it's worth, I looked at this question, but it didn't really give me any leads. There's also a SciAm article that talks about canine communication, but it doesn't discuss this specific topic.)

Since it seems like you're looking for constraints to help construct your language, I thought one helpful approach would be to lay out exactly what sounds you have to work with. I've taken a chart of the International Phonetic Alphabet (IPA) from Unilang.org and annotated it to indicate the sounds which are impossible without lips - crossed out in red. 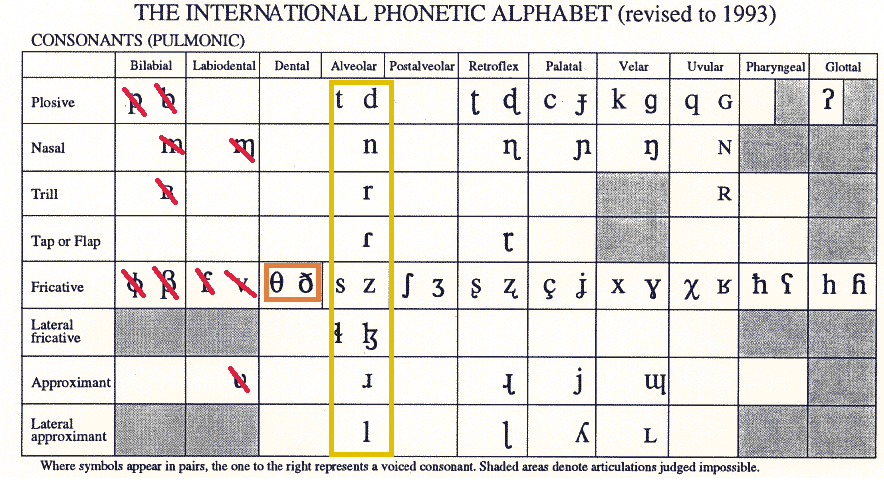 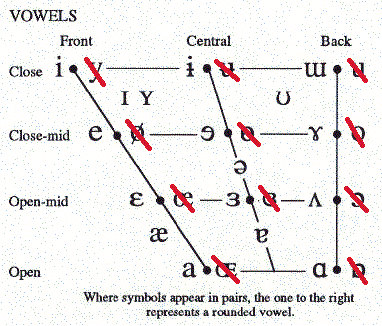 There's another thing to consider, if we're talking about carnivores like cats and dogs - their teeth aren't like ours, so it's likely they'd have some degree of difficulty forming dental consonants, and maybe alveolar consonants (with the tongue just behind the teeth), in the way that we're used to forming/hearing them. As their teeth don't form as close a 'seal' as ours, with larger gaps between pointier teeth, it's likely there'd be a lisping or 'whistling' sort of inflection on these consonants - which would be perceived as an impediment if they were trying to speak one of our languages, but would be the normal way of producing such sounds in a language developed by/for pointy-toothed carnivores. The effect will be more pronounced for the dental (marked in orange) than for the alveolar.

All this is also dependant on the shape and size of their tongue; dogs especially have larger tongues proportionate to their mouth cavity compared to humans, so they'll probably have more issues with this than cats. In humans, an abnormally large tongue is known as macroglossia, and affects individuals with Down Syndrome - a dog's speech might share certain characteristics commonly associated with the speech of individuals with this condition.

Something I haven't quite been able to define in full is whether or not a cat or dog would be capable of producing sounds that aren't in the human IPA. One thing that immediately comes to mind is a cat's purr, and off the top of my head I do not actually know much about how this sound is produced. Whatever mechanism is involved is very likely something that a cat would incorporate into its language, given the rich variety of ways in which real cats can purr. If you wanted to work it into this chart (i.e. to make a chart of your own) I would probably put it as a trill or fricative beyond the glottal. A canine language would probably also incorporate growling, which (when imitated by a human) is probably somewhere between a voiced uvular and glottal trill.

Given that their hearing is more sensitive in higher frequencies, it might be easier for them to perceive breathy/whistling sounds that are very subtle to our ears - accordingly they might assign linguistic significance to these sounds (e.g. allowing some air to escape through the nostrils, or between the teeth). If this was the case, it might be a part of their language that humans would struggle to understand/learn. More sensitive hearing overall might also lead them to assign significance to sounds that are almost imperceptible to us, like the sound of the tongue adhering to/separating from the roof of the mouth, or the sound of the throat closing during swallowing.

You haven't spent a lot of time on YouTube, have you? Do a search for "talking dogs" or "talking cats", and you'll see that, with enough training, they can do pretty much every single phoneme out there, despite the immobile lips. That happens because of allophones, which are similar groups of sounds that form the phonemes used in a language. In fact, you see that even in humans, where people thousands of miles apart learn the same phonemes as different allophones, which makes them harder to understand, but are still possible. We usually call these "accents." There's more than one way to speak a particular phoneme. They often sound more like what a deaf person sounds like when trying to speak; they're clearly not using the allophone we're used to, but they can be understood to some degree.

Not the answer you're looking for? Browse other questions tagged science-based language fantasy-races .

42
For designing a vocal language for an intelligent species, how to decide on phonemes?
8
How can a team of shapeshifters communicate?
6
How would having pronounced lower tusks affect or impede language?

13
How would language be affected if humans had animal-like mouths?
25
Would a primitive species be able to learn English from reading books alone?
6
What would make a bigger animal be able to fight effectively against humans with firearms
2
What phonemes could an intelligent fox produce?
4
What are ways an alien species could have a subtle inability to pronounce certain sounds in Earth languages?
5
What would a good justification for my giants having a non-spoken language?
3
When building a language & alphabet (especially between species) what range of phonemes (mainly consonants) should be included?
6
Why would a language have three rhotic phonemes?