If anyone thinks of an image that speaks "Egypt", odds are no-brained that the number-one choice would be the mighty pyramids, the grand resting places of the people's man-gods, or pharaohs.

The oldest and largest of Egypt's surviving pyramids was Giza. It would have stood 455 feet tall and 756 feet at the base, covering a volume of at least 90 million cubic feet. The map is as follows: 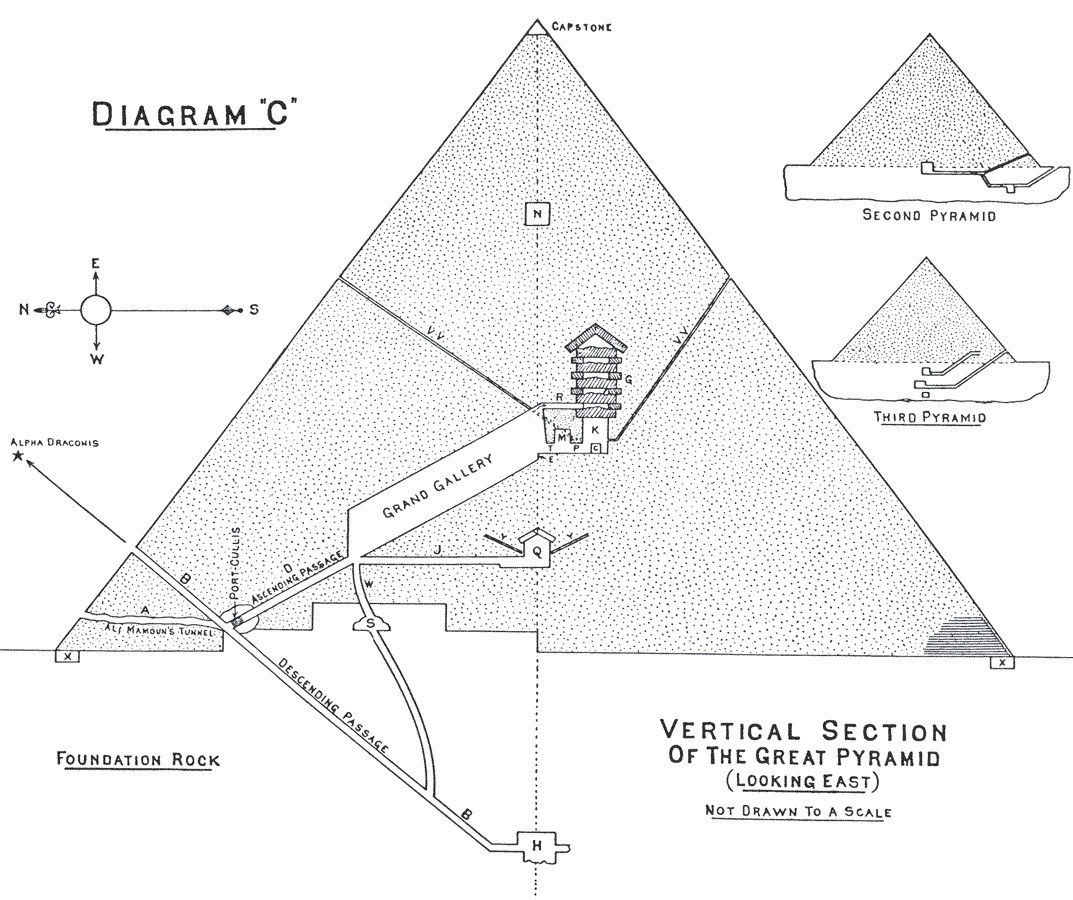 If it weren't for materialistic impracticality, the Japanese today would have been busy building the next largest pyramid--the Shimizu Mega-City Pyramid, which was planned to be built over Tokyo Bay. The plan was 6575 feet tall and an area of eight square miles.

The people of ancient Egypt always considered their pharaohs to be living gods, so would it be possible for an ancient pyramid to be as big as Shimizu to put emphasis on that belief? Even with the interior diagram presented here instead of the arcological skeleton that the Japanese were planning, would it be practical to even try?

It's certain physically feasible. The Egyptians had (by trial and error) discovered the angle of repose, and knew enough about the angles to ensure that such a pyramid would not have crumbled. Since there are any number of mountains higher than the proposed 6575 feet, it's clear that the material strength of the rocks used would not be exceeded.

There is no obvious reason to think that the construction techniques used for Giza could not be scaled up to a larger pyramid. The size of the stone blocks would not change, and the transport mechanisms would have worked just as well. 6500 feet of elevation is not enough to require oxygen or anything similar for the workers, so that's not a problem.

Would an ancient pyramid that size be possible? If by possible you mean would anybody build it? Nope. It's simply too big, so it would take to long to complete. Let's start by assuming it's the Giza pyramid on steroids. 14 times taller, and proportionally wider. The problem is that its volume is $14^3$ or more than 2700 times greater. Giza took somewhere between 10 and 20 years to build, so an estimate of at least 1000 years seems reasonable. However, the Egyptian pyramids were not monuments to some abstract deity, unlike the cathedrals of Europe, which often took a century to build. Instead, each was a monument to an individual god-king, and it was imperative that it be constructed during his lifetime. No god-king would bother starting such a project, since only his successors would eventually be honored when the pyramid was completed.

Ultimately, this comes down to one question: can the entire population of Egypt build that pyramid during the lifespan of one king?

Let's assume that we've got everybody in Egypt is a skilled laborer working on it, that it poses no additional engineering challenges compared to a standard pyramid, and that building time scales inversely with labor.

Our pyramid is 14.5 times the height of Giza, for a total of 3018 times the volume. Mark Lehner et. al estimated that the pyramid of Giza took a peak workforce of 40,000 men 10 years to build. If we assume that we've got a longer time period to work on our pyramid, say around 50 years, we can compute the total workforce we'd need by multiplying the workforce for Giza by the increase in volume we need for our bigger pyramid and dividing by the time increase.

Building a pyramid as big as you described would be completely infeasible with ancient Egyptian, or even modern, resources. Not because of any design feature of the pyramid, but the sheer amount of material involved.

If the "Mega-pyramid" you describe has the same base length to height ratio as the Great Pyramid, it would have roughly a hundred billion times the volume. The Great Pyramid, with its comparably puny volume, took 20 years to complete. You could put the world's population to work for a millennia with ancient Egyptian tools and not make a dent into the construction.

That being said, I would be curious to see a these Japanese plans if you have a link to them. I'm surprised that someone would even bother to draw up such a difficult proposal.

Not the answer you're looking for? Browse other questions tagged construction pyramids or ask your own question.

1
An Ancient Superpyramid
4
building a pyramid with upgraded ancient Egyptian tech
10
What would be the most-optimal location for the Lunar Radiotelescope?
0
Heated Brick vs. Solid Stone Brick
8
What geotechnical conditions would force the use of crypts or catacombs for burial (vs. sticking coffins in the ground)?
7
Using Molten Metal as Mortar--Would it Work Today?