Visibility in a ringworld atmosphere?

So I am proposing a ring-world of approximately 1600 km diameter. The ring spins for earth like gravity. The ring itself would be several kilometers thick with Earth like variations in elevation (i.e. mountains less than ~8 km above sea level, with ocean trenches of similar depth) The atmosphere would also be the same composition as Earth's. The ring would have Earthlike lighting levels.

The question: How far could you see in any direction?

I would think there would be a limit to how far you could see before the atmosphere would haze and limit your sight distance when looking towards the horizon (although there wouldn't be a horizon; maybe along the ring is a better term), but looking upward further past a certain point the haze should fade and you would be able to see the farther sections of the ring. Is this correct? 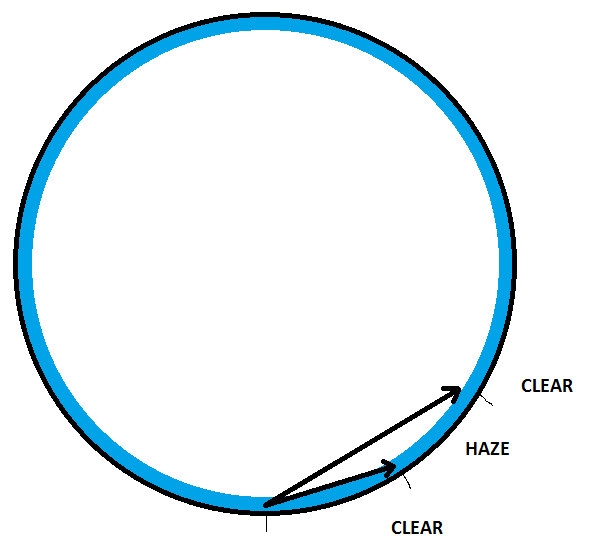 Could someone help me out with specifics; distances, angles, etc? How would this change with elevation? Does less dense air equal farther sight distances?

I did some googling, and the best answer to how far the atmosphere of Earth would let you see if it went on forever was in this post in Reddit:

The dominant effect should be the diffraction limit of your eye. You can resolve two objects separated by an angle theta equal to wavelength of light / diameter of telescope. For your eye, theta ~ 500 nm / 0.5 cm = 10-4 radians. If you had a building H meters tall at a distance of D, then you could see tan(theta) ~ theta ~ H/D (the first part comes from the small angle approximation), or H = 10-4 * D. So, at 10 km (104 m), you could resolve a 1 meter object. At 10,000 km, you could resolve a 1 km structure. By "resolve", in this case, it would be your ability to see the object against the surface of the ground.

Ten thousand kilometers is larger than your ring world by around an order of magnitude, so while haze would affect visibility just as it does on Earth, you would be able to see quite well in all directions.

Now, one thing to consider about your atmosphere. If it has the same composition and density as ours, and in a ringworld with the same average temperature and gravity as those from Earth, the stratosphere should be approximately 18-19 km deep. Let's round it to twenty. This calculator (in the "Area of circle segment by radius and height" part of the page) gives us a chord length of aroud 504.38 kilometers. That's the longest distance light can travel in your world without leaving the atmosphere. That's two orders of magnitude greater than the distance to the horizon on sea level on Earth. Your world, though smaller than Earth, would provide its inhabitants with quite a sight.

Edit: Just to make things clear (no pun intended), haze and refraction would have their maximum effect on objects around 500 kilometers away from the observer. Farther than that, haze and refraction are actually reduced. But you'll see the whole ring in all directions without much distortion.

Not the answer you're looking for? Browse other questions tagged science-based science-fiction atmosphere space-constructs .

13
Is it really possible to see across a ringworld?
1
Atmosphere density and visibility range
50
What would a 1.5 km wide, 20 km tall spire look like?
7
The horizon, concave vs convex

6
Weather on a mini-ringworld/Banks Orbital
1
How to naturally maintain a Earth-sized Planetary Ring System and the possible periodic bombardment that can ensue?
2
Visibility of a Dyson ring/swarm
4
Worldbuilding & Climate: How does the sun affect a simple sphere with atmosphere?
2
Protecting a ringworld from solar radiation
7
How far could you see the Andes from the Pacific on a flat Earth?
7
Counterbalancing a Ringworld so it doesn't explode
8
Yellow sky with a breathable atmosphere?
3
If an entire orbit was a single ring shaped "planet" what would the view be like?