How do I isolate a city?

Is it possible, the world being as it is for a city to be isolated completely from the world? Assume technological advancements to be the same as they are today.

Would such a scenario be feasible? Can a city be effectively besieged for an indefinite amount of time in such a way that no one can enter or exit? What effect would this have on the people living in such a city?

Quick Edit: Thank you for all the amazing answers. Just want to clarify, this is being done to them, they aren't cooperating

I would point you to a real world example...North Korea. Currently, the country is isolated from the rest of the world partially due to its own choice and partially due to sanctions placed on it by the outside world. Some things to keep in mind would be the resources that such a city would require to maintain itself. If you are looking at today's world, that is a massive feat to undertake. Today's level of technology was achieved by specialization: many finding that which they excel at and focusing their energies there while trading the products of their labors for their other needs from others who specialized in other ways. If the city in question is to be of an equivalent level of advancement to the rest of the world, then it will have to compete by maintaining all of this specialization within itself. Another question that should be asked is how the city would have managed to have advanced in pace with the rest of the world. Without external factors pushing it (enemies/war), there wouldn't be the motivation to develop fast which should put it far behind most countries.

Food production is also a necessity. Farming requires land. Even the city-states of Ancient Greece had a lot of land to them with which to produce food. This will force your city to be a small landmass to be sustainable. Even if you find a way to produce food inside the city, the city must have developed from a lesser sophisticated one that required the land at one time.

Another question to ask is the amount of time that the people have been isolated. For one, they would have their own culture all their own (or a derivative of a modern day one with whom they split from in the distant past). If they have been isolated for a couple thousand years, they would still be considered human; however, they would have likely developed certain genetic mutations that wouldn't be present in the outside world that could alter their appearance and/augment them differently.

A last note is how aware are the citizens of the outside world? Going back to North Korea as an example, the upper echelon is aware and does participate in the outside world while the masses are sheltered within and controlled. How are citizens who want to expatriate treated/handled? Are they allowed to leave and under what circumstances? Are they imprisoned for their desire to leave? Your form of government will also be key as democracy likely wouldn't maintain secrecy too well with open thought.

We are still discovering communities in the rainforests, even now.

If you had a willing community (be it due to religion or simply wish to maintain isolation), then there are enough remote places that could "hide" a city if you weren't looking to closely for it. Think of the Arctic/Antarctic, Nevada desert and the rainforests.

I would suggest that beyond a certain population the city would need to be at least partially located underground. This is in part to better hide from Google Maps and in part because remote places are, by their nature, quite inhospitable so would provide shelter from the elements.

A plague, especially a genetically engineered one. Consider if the common flu was crossed with ebola, in such that the symptoms were merely flu like if you carried a distinctive robust genetic marker, e.g. the ability to metabolize milk, aka lactose intolerance, but ebola-like if you lacked that marker.

A city-state like Singapore might close all borders. With the reduced population they could turn some of the area to farming and subsist in the same location where are larger city used to stand.

Lastly, a cult/superstition situation could arise to perpetuate the seperation and fear of outsiders ("Those filthy milk drinkers!"), long after the initial threat is no longer valid.

It's possible here are a few ideas

If the city was specifically built for that purpose or had a few years to prepare its infrastructure for self-sufficiency, that might include setting up a fortress-style walled city, and beds for super-efficient gardening (including choosing only crops that are very well suited for this but also resilient and stable), moving a big part of the living quarters underground so that buildings would not take sunlight away from crops, and choosing carefully how many people (mouths to feed/hands to work) and what kinds of people (genetic diversity, skills/education, social stability) to take in. I see no reason why all that could not be achieved in less than five years, if it was someone's priority, and there are multiple plausible reasons why it could be. The only way a city like that, given sufficiently strong walls, could be overcome is by the besiegers manipulating the weather or blocking out the sun.

There are possibly two questions here, one about isolation and the other about sieges.

In mediaeval times when walled cities were built to be non-porous sieges were practical. Nowadays, a large city is such a vast and porous thing that medieval style sieges are effectively impossible. You could stop the military moving in, you could close all the major routes and blockade the river, but when a city can cover the better part of 1000sqm, you're not going to be able to close every route and still supply your own men. However, that's always been the game in sieges, can you maintain your own supply lines while cutting off the city. Maintaining your own lines is much easier these days, cutting off the city is much harder. If you can justify how it's been done then you could probably get away with it in a story, but a modern city is as porous as a very porous thing.

Depends on what you mean by a city. According to Oxford, a city can be defined as a large town and according to Encyclopedia Britannica, a city is a "relatively permanent and highly organized centre of population, of greater size or importance than a town or village". Since what is consider a 'city' population can vary between regions and nations, it is hard to say what is considered to be the determining size for a city. Thanks to the laws in Croatia, the town of Hum with a population of 23 is considered a city - the smallest city in the world by population.

Now, if you want to isolate, you could have a city that tries something like the North Sentinelese, have a city on a remote island that is hostile to many people in the outside world. The North Sentinelese are a primitive group, but they live on an island with a population estimated to be between 80 to 150 people. This meets the population criteria of certain places, even if it doesn't meet the technology requirement. Now, the North Sentinelese are able to survive on the island meaning they are self-sustaining, able to live on just what the island provides. Being self-sustaining is important for your city being isolated - it will have to be able to survive with little to no assistance from the outside world. So is the isolation of being on an island, with the amount of water between the city and another human settlement being a great reason for people to stay and no one to get in or out. Now, while they can have technology, it would be hard for them to have modern technology if they are truly, completely isolated from everyone else. Even North Korea depends on handouts from China to get the technology it has. Without modern technology, the 'city' in question could be built by more primitive means similar to the Mound Cultures in North America. 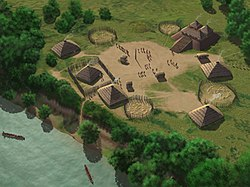 Using sculpted rocks and soil to make earthworks, platform mounds in the form of small 4-sided truncated pyramids, homes, and buildings could be created with primitive tools or with whatever modern hardware tools they can get their hands on. With this, you could form a small city isolated from the rest of the world. You can have the city be simply far away enough that most people would rarely want to visit it or make the people so distrustful of the outside world that they will use weapons to attack those they don't like and/or potentially capture anyone who arrives to the island city, forcing them to remain a resident of the city. In my opinion, the later would make it easier for the city to remain isolation since the people would simply be too dangerous for anyone who wasn't insane to want to go to. This will probably make the inhabitants xenophobic or distrustful of outsiders. The only outsiders that might be trusted might be those who are captured and indoctrinated.

Not the answer you're looking for? Browse other questions tagged science-based society geography isolation or ask your own question.

7
Can I build a self sufficient medieval city?
3
How many farmlands would a city need to be self-sufficient?

3
Could (and how would) life develop and survive in a place of 24 hours of darkness?
4
How would an unexpected zero-g event affect a city?
7
What's a plausible explanation for a space faring civilization with a "16th century" culture?
2
What sort of cybernetic/genetic enhancements would make sense for cold-blooded soldiers leaving their natural habitat?
2
How would a port city located on a river on the border defend itself?
9
Would humanity survive an empty Earth suddenly populated with young children?
7
How to maintain a closed environment for one person for a long period of time
6
Could a city live in a money-free system in a medieval fantasy setting?
26
Could a natural disaster completely isolate a large city in the modern world without destroying it?