Let's pretend the lithosphere of Earth were smoothed somehow to fit a perfect geoid and maintained in this shape; all the water would turn into a uniform layer flowing over the ground.

If my calculations (hopefully) are correct, thickness of the water layer should be ~3 km.

Will any piece of ground ever be exposed over the water surface even for a short periods of time due to internal or external forces, such as moon gravity, centrifugal force or for any other reason?

Currently, the greatest tidal ranges, of about 16 meters, occur in the Bay of Fundy. Why is this the case? Resonance is apparently created by an alignment of the shape of the bay and the Moon, which happens in very few places (see also this paper). Without the coastline to interact with the water, the tides wouldn't be nearly so drastic.

In your world, you would need tidal ranges roughly 187.5 times greater - actually, double that, since the depth of three kilometers is presumably from the mean water level. With no land above water, you won't see any tides nearly as significant.

Will the mean temperature on a surface of this weird world be the same as a current mean surface temperature (288 K)?

No. The effective temperature - without accounting for greenhouse gases - will be different, because the albedo would be different. That Wikipedia page says (citing this paper) that temperatures would rise 27 °C if the world was covered with water, as in your case. That's likely too hot for life.

tldr
Add more water if you wish water covered planet. Poles although, may be like it is now, icy and solid surface where live some creatures.

Yes, it will(may and will over geological time), for that other reason.

They are not strongly related to answer and question, but it builds overview on topic, and maybe some moments are related.

Why and Which reason?

There is a picture for you to guess: 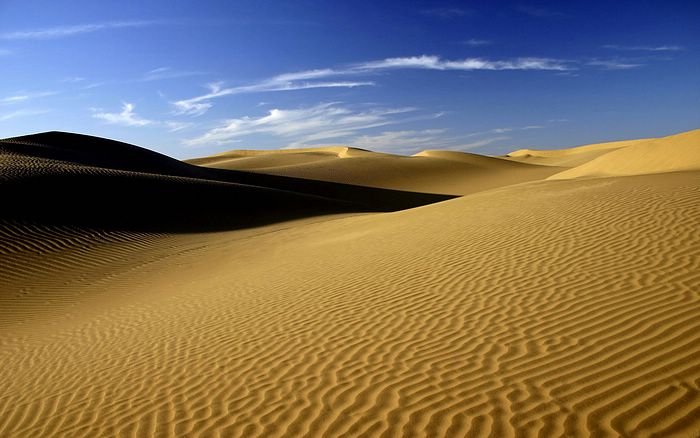 System with is described by OP Q is not stable. At begin, Earth may be perfect geoid, mass of crust is even distributed, magma is consistent, evenly heated(no density changes from temperature), equal salty(or not), etc etc. That everything will not change the fact, it will get those ripples over time, but it may affect time needed for that.

Origin of water on Earth

Important moment for any earth-like planet, both of that sources internal and external adding imperfections to planet mass distribution, crust strength, craters, etc.

Tides means water movement, not imaginable movements like waves in ocean or sound waves, but real flow of water, which drags materials. That water flows will be different in different parts of earth just because geometry of earth and forces involved. Let say virtual poles in plain of moon orbit - there are slower water flows, on equator (earth cut of moon orbit plane) it will be faster.

That difference may be important, but also it may have some strange effects too, take look at Saturn's hexagon which may affect material movements on bottom.
I'm not capable to say how fast will be such flows, I'm curios by my self.

Bald earth, I mean with flat surface and water on it - is not stable system.
Water, like wind in desert, will form same ripples on bottom, and more ripples there are, more and faster will they grow and form new ones. That will lead to imperfection on earth crust, because of mass of sedimentation layer, because of they do actually have viscosity - it will compress solidify, as any sedimentary rocks do(all that stuff). It will affect crust it will be thinner ticker, crust weight will affect's magma etc. Step by step there will be more and more imperfections - it will move as dynamic system to some sort of dynamically-chaotically equilibrium.

Water is more dense then air, so it will have more effects on earth upper layer.

So 3km tall plateau, why not. All that process will take place long before earth-like planet gets all that water, because magma also is a fluid actually(not solid at least).

It so much things and complex stuff involved, so no one may say what it will be, except it will not be a bald earth geoid, just cant't happen. If you see that you may know it's artificial and fresh made, geologically speaking.

If there is already sand available, any material with small particles, some dunes may be formed pretty fast, depends on how much and which quality is surface material. 100-1000-10000 years will be enough I guess, if material is easy movable by water flows. There will be the limit, how tall they can be, as it is for the mountains.

Very important factor will be established water movements flows and air flows. Air movements will affect water and will be affected by water (tides). If it will happens to be cloudy, and it may because of lack of big chunk of land, mountains specially, it may so happen to be more cloudy. So even water is't so reflective, but clouds have potentially high albedo and may regulate temperature.

As land not drain clouds I guess average temperature may be even less then now, it depends. One is sure, frozen water as result practically no clouds. Hmm but snow ice have also high albedo. So first is't sure, depends. But clouds forming, which is water evaporation, will have buffer effect, and may regulate temperature. What I wish to say, temperature is't just matter of albedo, but properties of water too - not so simple, simple assumption shall not pass here. Second is sure, temperature distribution will not be even, some places will be warmer some colder.

Recall one example which I definitely wish to add here.

The Moving Island of Schiermonnikoog

Not the answer you're looking for? Browse other questions tagged earth-like water-bodies or ask your own question.