I am an archeology student. And as with everything I am fascinated by the ancient Greeks. So I am working on this system based on some of their actual beliefs mixed with some original ideas.

One point of my system is about daimones. Nature spirits that are either benevolent or malevolent. Through binding magic a mage can binds them to their soul and invokes some of their power as needed. There are good and bad daimones from 8 different domains. A mage binds one spirit per domain either good or bad but not both. So a mage can have 8 daimones at one time. After invoking a spirit the binding is broken and a new daimon must be bound. You can use the powers of invoked daimones 24 hours. If you use two at once it's 12 hours each. 3 and it's six hours and so on. Depending on the daimon you get one of 16 effects.

My question is what effects must be changed to follow some form of logic? And which domains must be added to cover the whole spectrum of a human being? 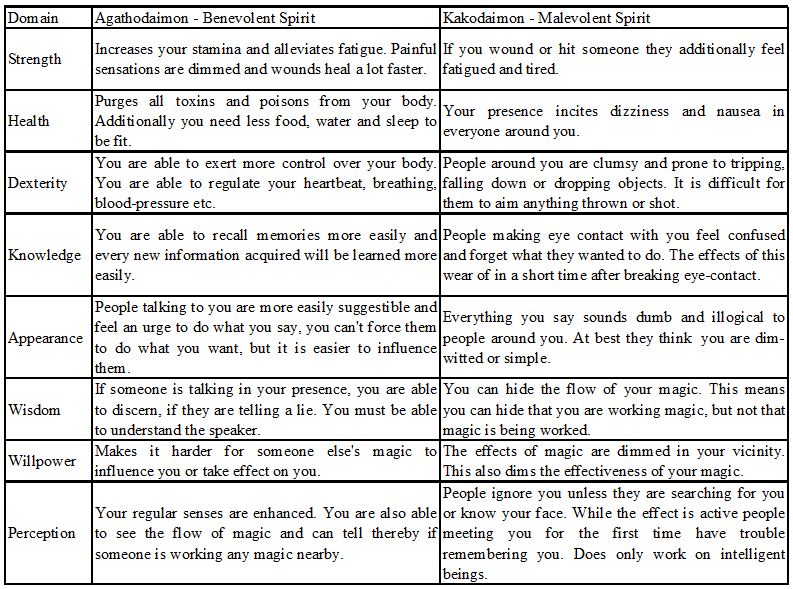 Reading through the comments I am having a tough time figuring out if this thread is still active, but I do have a few ideas.

Firstly, you ask what must be changed to follow some form of logic? As noted, magic usually isn't very logically, however I understand what you mean by this and to me it seems like an additional (9th) domain might be useful (since 7 doesn't seem to work as you mentioned in the comments) to ensure some sort of balance. That is, a rock-paper-scissors mechanic. The main reason to use an RPS mechanic is to make sure that no single ability, or any combination thereof, is head-and-shoulders better than the others. If this were the case, there would be no real reason to ever use the other spirits, or for that matter include them in your world, thus my suggestion to add a 9th.

A functioning rock-paper-scissors mechanic can only work with an odd number of features. The ability to bind multiple spirits complicates the system, but the combinatorics exist to sort the problem out. My initial suggestion to simplify things here would be to only allow 3 spirits at any given time. This works well as a multiple of 9, and still gives an 24-, 12-, 8-hour time span feature as you mentioned. Should you decide to go that route and run into a specific problem developing a balanced scheme, that may make for an excellent follow-up question.

As far as which domains must be added to cover the whole spectrum of a human being? my initial thought was to add a creativity/ingenuity type category, but it would be hard to specify what exactly that might do, especially for the malevolent spirit. One idea that does seem to flow would be an Emotion category. The benevolent spirit would add empathy and the ability to relate to people, thus making them more likely to support your cause. The malevolent form would make you cold hearted and distant, which may be useful for making those "tough" decisions. Just an idea.

One other thing: the malevolent Appearance spirit doesn't seem fitting. Instead what if that spirit made you intimidating to others. People would be scared of you and thus less likely to oppose you, but also less likely to support your efforts.

Honestly, it feels a bit too D&D/vatican for a world. The exact "you can have X spirits" and "the more spirits you have the more the decrease in this manner" is so very...exact. In real life there is variation, one person can run longer then another, or some are better at multi tasking then others etc. I would build in allot more wiggle room for variation amongst people. I would also better explain why someone can only bind spirits in such a way, what limits them from having more bound or not releasing them etc?

Also, if a mage has to spend effort binding spirits, and can get as much out of one spirit as he can out of 8, why bind 8. Yes versatility is nice, but laziness is common in humans as well :P.

Thus a few things I would say, to keep with the general principle but better explaining why it exists and add wiggle room:

1) A mage can bind one/more spirits as long as they are able to, though it's nearly impossible to keep the mental focus required to keep a spirit bound when sleeping, thus spirits often are not bound for more then a day.

2) actively using a spirit tends to be draining on a mages power reserves. Using multiple spirits tends to exhaust them faster for obvious reasons, thus the reason that using 8 spirits generally tends to result in only being able to use them for 1/8 as long. However, strong mages may be able to do this for longer, it's not as exact as 1/8 as long for 8 spirits and mages and their spirits vary.

2b) weaker mages tend to only bind a few spirits, because they lack energy to support multiple. as mages get stronger they tend to bind more because while they can't keep a spirit bound for longer then a day they may have the energy to use a spirit for a day and use another bound spirit for awhile if they have stronger control.

4) It is possible, in theory, to bind spirits again after the first binding in the morning, if you expanded all your bound spirits. However, to bind new spirits you must first release all your current spirits; you can't keep the 'lock' on bound spirits while drawing in new ones. It's also exhausting, magically, to bind spirits. Thus binding a new spirit during the middle of the day isn't common because they will have to do a magically exhausting binding again during the day, after already exhausting some of their energy using a bound spirit, and generally it's too exhausting to be worth doing.

5) You probably want to make sure your spirits aren't sentient, or else you get into lots of moral ethics about binding them. If they aren't sentient then the idea of a "good" spirit or "evil" spirit is meaningless, non sentient beings can't have ethics. In addition, it seems odd to have exactly two classes of spirits, but no more; no morally-neutral spirits etc. I notice, however, that your 'good' spirits always affect you and your 'evil' spirits always affect others. I would consider changing it to be that they only bind one type of spirit, but they bind it in one of two ways, to affect themselves, or affect others.

5b) I would suggest that the two classes of spirits (good/evil) are simply the most common/easiest ways of binding spirits. Other binding options exist, but people tend to stick with what is easiest and proven to work. Thus the list is not an exhaustive, and oddly exact, list of what can be done; just the common practical uses. Innovative, powerful, or just unusual individuals may bind spirits in different manner.

5c) the spirits you listed are not the only spirits in the world, just the most commonly bound.

I have one more for you should have 1. speed

benevolent: Increases your seep and reflects for a short time.

Not the answer you're looking for? Browse other questions tagged magic super-powers ancient-history or ask your own question.