What part of the coast gets hit by the tsunami?

I've drawn up a set of landmasses for my story, and now there's a tsunami headed for them. I know where the tsunami is coming from, and I could decide how big it is, or any other characteristics of it.

What parts of the coastline will be devastated and what parts will escape unscathed?

and a tsunami emanates from Puerto Lempira (Honduras), does Jamaica protect Guantanamo? Is Maracaibo protected by that thumb of Colombia sticking out into the sea? Is Havana safe because it's on the far side of Cuba?

How can I figure this out for my own fictional setting?

All waves, including tsunami waves, follow wave mechanics. Notably here, they follow the rules of diffraction, which you probably learned about in high school physics: 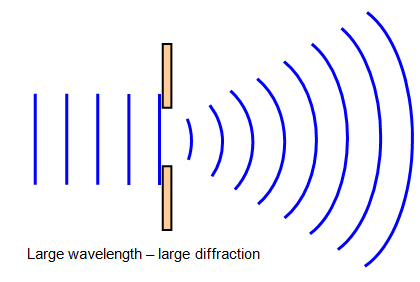 Because of this effect, the waves headed for Jamaica will bend around the island, and still strike guantanamo. That being said, the waves will have to travel a greater distance, experience more friction, and be modestly less intense because of that.

However, keep in mind that your coast's topology will usually decide the extent of the damage more so than the strength of the wave. Towns with sheer underwater cliffs at their coastline have been nearly untouched by tsunamis that devastate towns not a hundred miles away with gentle sloping beaches.

To add to @cinnamon18 answer: do remember that a tsunami seen from the perspective of a human does not at all look like a "wave" as we know them. They are indeed that, but on a huge scale.

To a human, a tsunami instead looks like the sea is just rising, and rising... and rising. As the sea rises it floods over embankments, walls, dunes and other things that normally hold the sea back. It does not look like a wave; it instead seems like a sudden flooding, that happens in just a few minutes instead of days.

Also the coast affects the wave. A shallow coast slows the wave, causing it to "bunch up". Out at deep sea the wave is barely noticeable. But as it slows in shallow waters, it becomes much higher.

So what cinnamon18 said: cities on cliffs faces will see just a mild rise of water, that relatively quickly recedes. But areas on shallow coasts, and that does not rise significantly above the sea level, they will be flooded.

Here is a link to a tsunami simulator: http://tsunami-maps.com/index.html Allthough it might not look very acurate, it uses data from google maps to deal with the topology. It should give you an idea of which parts of land will get flooded or not in different scenarios.

Not the answer you're looking for? Browse other questions tagged science-based natural-disasters or ask your own question.

19
What is the likely method of surviving a Tsunami in a city?
11
Where would an asteroid have to hit earth to cause an impact winter?
2
When the Grass Gets Even Greener
8
Forming the “useless coast” — i.e. no shipping allowed
1
What if the Moon gets a new big crater?
12
Would an asteroid of similar size to the one that hit 65 million years ago cause humans to go extinct?
2
weather after the earth gets flooded
1
How would constant rhythmic tsunamis affect the coast lines of the Atlantic Ocean?