I have been looking at various animals that have evolved some level of aerial capability, and I came across Kuehneosauridae. Reptiles which evolved gliding struts, attached down their sides, which could be folded down when not in use. These struts supported a membrane used for gliding, and I was wondering what kind of structural changes (if any) would allow these animals evolve powered flight?

Thank-you to anyone who takes the time to answer my curiosity.

Skeletal of one of the animals in question (not mine, just googled it): http://www.reptileevolution.com/images/lepidosauromorpha/diadectidae/lepidosauriformes/kuehneosaurus588.jpg

The big one I'm seeing right off the bat is that the struts would need to have two dimensions of motion. Right now they can fold front-back so that the membrane can fold up against their side. For powered flight they would need to be able to move up-down as well, like a bird flapping its wings. Birds have ball-and-socket joints on their wings, like human shoulders, which is why they're able to both flap and fold. Your flying lizards would need something similar, though it's a bit trickier since it's not a primary joint (and it seems like you don't want them to look like dragons). And of course, going along with that, they'd need the necessary muscle structure to be able to flap them.

In a similar vein, as much weight as possible would need to be cut. For instance, many birds have hollow bones, as that's an easy way to cut down on weight and make it easier to fly. I'd guess something similar would need to happen for your lizards, and also probably shorter tails.

This is the first and foremost requirement of powered flight: you need something to move the widened area. Kuehneosaurs (along with several other groups of mesozoic reptiles) did not have any muscle attachment points for their elongated skin. 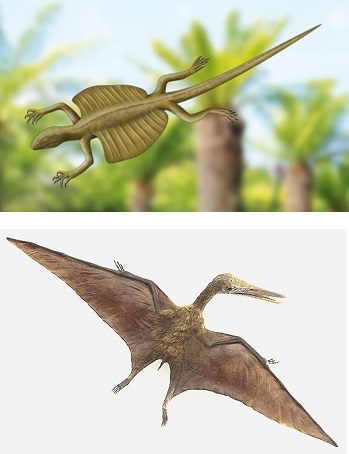 On the top is a koehneusaur and on the bottom is a pterosaur. As you can see from the image, the major difference in their forms is that the koehneusar's skin membrane is not attached to either the arm or the thigh region and there no means for it to flap its membrane up and down on its own will. On the other hand, the pterosaur's membrane is attached all the way from its shoulder to the elongated 4th finger, providing it with a very viable power source (arm muscles).

The most important flaw of the koehneosaurs (as we understand them now) was they were unable to flap their skin membranes.

Notice that when we say body size here, we are referring to body weight. So another problem with koehneosaurs was that their membranes (even if attached to a muscle) were too short to allow them long distance flight.

Since koehneosaurs' skin flaps were not attached to any limb, they had a series of elongated ribs to support their membranes from hanging loosely. In case they had their membranes attached to any limb, these ribs would prove to be a major obstruction in flapping the membrane. Their ribs were made for support, not movement, and the attachment joints of these extra ribs to the ribcage were designed for rigidity, not flexibility. If a koehneosaur had its membrane attached to a limb and then quickly flapped that limbs, there is a major chance they would have mortally injured themselves by breaking some of those supporting ribs.

So the third point of anatomy obstructing them from powered flight was that their rib joints were inflexible (to support the membrane) and did not allow for the movement of the membrane over wide angles.

Vertebrate creatures with powered flight (pterosaurs, birds, bats) have specially designed shoulder joints which makes it easier for them to move their wings/arms up and down. This is an exception, not the rule. All non-flying vertebrates have shoulder joins which allow arm movement in all angles, but encourage arm movement in forward and back angles.

In case koehneosaurs' membranes were attached to their arms, their arm joints would have to undergo some visible changes to facilitate up and down motion of the limb, which would help provide the required thrust for flight.

5
Dragon with pseudo-wings, is this viable?

4
Solar powered plane without batteries
7
What would the changes necessary for powered flight using rib-derived "wings" look like?
3
Human Shoulder Motion & Powered Flight
2
Quadrupedal Flight
1
Perpetual motion machines and supersonic flight
2
How a limbless creature could evolve powered flight?
5
What would be the physical characteristics of a sapient, mountain-adapted, gliding mammal capable of magically producing thrust?
3
Would there be any ways to theoretically have powered flight before the invention of an engine?