The Reality of a River World

In a setting I am presently working on, I have envisioned a world similar to 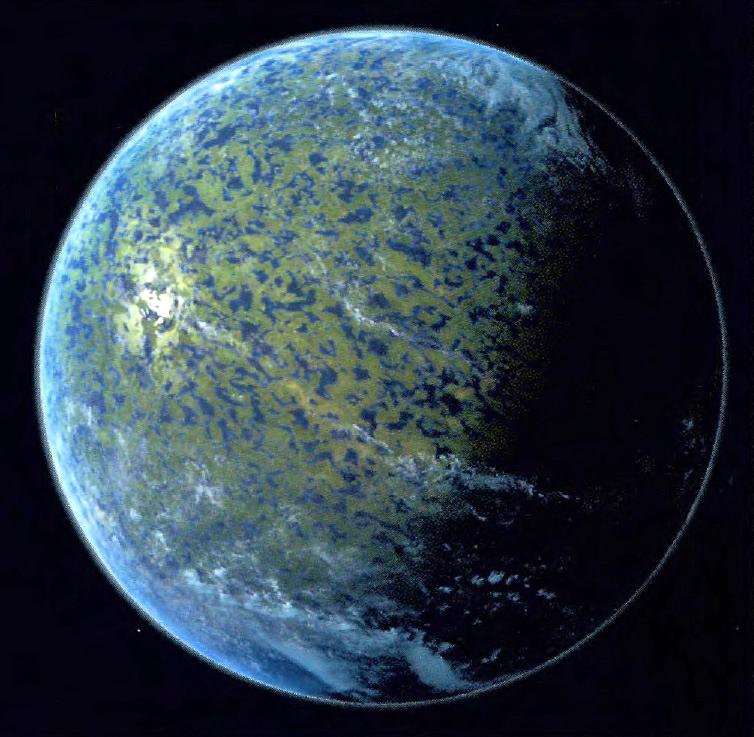 Star Wars' Takodana, in that its water is mainly in the form of large rivers, or smaller seas (I generally picture it being all rivers, unlike this picture; but I'm flexible). See also; Takodana's surface.

How realistic is this?

Fleshing out the question-

I think the current answers are all thinking of a very Earth like planet, including its orbit around its star.

As others have said, rivers have to flow somewhere, so your world would be more like full of seas or lakes than rivers.

How about we change things a little and have your planet orbit another, much more massive planet, such as a gas giant?

Get the giant in an orbit around a yellow star like our sun, and your planet will have as much sunlight as we do (though the gas giant may make for really interesting eclipses).

Now, if your planet is tidally locked, that water will be pretty much stuck. If not, your rivers will be pretty interesting, in that they will perpetually be running - but not necessarily towards the sea!

Huge edit @shufflepants has called my attention to the fact that the rivers wouldn't reverse their flow twice a day as I expected. So I am striking the previous text for this part of the answer, and including a couple scenarios that more probable, though still quite exciting.

In one scenario, your rivers could simple go around the world. On your planet, water will try to settle in the lowest places just like here on Earth. But there is no ocean, because there isn't a sea much below the river beds. Instead, the motive force behind the flow of the rivers are the tides. The tides will follow the gas giant, and the rivers will follow the tides. The interesting part is that this means the margins of the rivers will change within the course of a day. Some parts of the river may only be crossable by boat on the high tide, and may be crossable by foot on the lower tide.

Or, your planet could have oceans much like the earth. If it does, another interesting effect happens. You see, rivers end up in the oceans because usually they are more elevated than the sea. But during high tides, the water level on the sea may be higher, and the sea will go into rivers. When this happens on large rivers on Earth, the effects may be pretty... cinematographic, to say the least. In the Amazon river, the flow of the river is reversed in a five hundred miles strech starting where it meets the sea. Salt water enters the river in the form of waves that can be 12-feet tall at some points. This is what it looks like. You can surf on a single wave for more than half an hour!

This is technically called a tidal bore. There are dozens other places on Earth where this phenomenon happens. So you could just imagine that your world is an extrapolation of this, with these waves happening at least once a day for rivers that are to the east of an ocean (supposing your planet goes around the gas giant in the same way Earth goes around the Sun).

Both scenarios would give your planet interesting seasons. When the gas giant and the Sun rise together on the sky, or when the Sun and the gas giant are in opposite directions, the water of the high tide will be at its hottest ("tidal summer"?). But when they have a difference of 90°, you get the coldest high tide ("tidal winter"?)

As for geography of landmasses, it's up to you:

You can also define how fast the water comes and goes... Depending on the force of the pull of the gas giant, the water may come slowly, or it may come like a tsunami (not very friendly to intelligent, surface dwelling life, though).

Also remember that your planet can have as many varied geographical features as real Earth does! You can mix all of the scenarios described above as you like.

One last thing, since I'm trying to be scientifically accurate here... Planets subjected to such tidal forces suffer from a special kind of geological effect because they are constantly being stretched in the directions towards and away from their "parent" planet. It is believed that this is what drives volcanism on Io (the most volcanically active place in the solar system). So your planet may be very active geologically too, if you want it to!

This is definitely realistic. What's actually interesting about this is that several of the issues you bring up sort of resolve each other. I'll go through them one by one.

In order to have this happen, you would need less water on the planet than Earth does. So right off the bat, even if you had an enormous consolidated ocean it would be smaller than the oceans of Earth. So right off the bat, you're going to be having less of an effect from erosion. Coupled with evidence from Earth, namely the Caspian Sea - which is completely landlocked - it's quite possible to keep the water separated.

Similarly, since we don't have very much geologic activity, there probably won't be mesas. Mesas are formed through eroding rocks uplifted by tectonic activity, so there would be fewer than on Earth, if any at all.

Speculation: One way I can see a planet like this developing is experiencing asteroid/meteorite impacts more frequently than Earth did. The way I see it, this would cause the planet to take longer to cool, meaning that the increased number of impacts would ultimately lead to a more pockmarked surface. When the planet does cool enough that liquid water can begin to build up, the craters would then become small seas. (Don't quote me on this part though, as I'm certainly no expert on planetary formation - I'm just extrapolating off what I know.)

The major issue I see is that rivers are flowing bodies of water. If the world was composed primarily of rivers and river systems, to where would all of that water be flowing? When the water reached its destination, what force would make it continue flowing? Gravity generally only works downhill, so I think to make a river world possible, it would have to extremely flat, effectively turning the rivers into canals.

Now, if a planet were incredibly massive, the gravity of such a planet may act to keep the planet flat (but flat enough, who knows?) For @John Robinson's idea of continued bombardment delaying the cooling to have an effect, the planet would have to have little to no atmosphere, creating an issue for the formation of life as we know it.

But an interesting thought I had is that the planet only has to be flat. That doesn't mean that it has to have been formed that way. Arguably, a sufficiently advanced (and motivated) society could flatten a world (realistically speaking, a smaller world than Earth) on purpose. Reasons for such a super-task might be the allocation of water to all parts of the globe/ populations; the facilitation of marine-based travel (the preferred mode of travel other than by foot for most of human-history); or self-preservation reasons like to control El Niño-type storm effects from a heating and cooling ocean, or to alter the planet's albedo for various reasons.

Water erodes the land. Weather erodes the mountains, in general. Eventually this landform will flatten out. So, you need some geological mechanism to uplift the land with history that allows for the specific form that erodes into lots of rivers separated by harder rock.

It will be temporary, and probably only on part of the planet. Do you want it to be a common thing, with new such regions forming after old ones erode away? Or is it a one-time episode?

You are showing a planet with massive lakes, consider the scale of the water features. Zoom out on google maps and see what water features we have that are on the same scale. Massive inland seas and the great lakes, not rivers.

So what you have is a fairly flat surface with few mountain ranges or evidence of tectonic activity, but still a fair amount of surface water. Perhaps the planet underwent planetary bombardment in the distant past which leveled the surface into a more uniform height (still lots of local elevation changes, but nothing like the deep sea to continental plateau elevations we have on earth). All the water on the planet was vaporized and re-condensed, raining down and being distributed in valleys.

These smaller "seas" can communicate with each other to some degree, circulation is primarily due to evaporation and rainfall. Without giant oceans and high mountain ranges, the surface of the planet is more uniform so weather patterns will be quite different (no sea currents to distribute temperatures, for example, or mountain ranges to stop rainfall). So the planet will have to be in a VERY sweet "goldilocks" zone to not freeze (an ice age will definitely carve up the terrain) or boil, thus it will probably be pretty tropical. Could even have a "tumbling" orbit so there are no polar regions and every part of the surface gets roughly the same amount of solar radiation to add to the uniformity of the entire surface (or perhaps a binary star system?).

Obviously this is not likely to be a "natural" planet, but one that saw intelligent intervention in the past that allowed it to develop life despite the circumstances that cause it to be a "river world" when seen from orbit.

11
Permanent settlements on the surface of ice
19
How long can a river physically be on a planet?
21
How wide can a river be?
6
can the same river be deep and fordable
9
A Swamp Valley reality check
18
Designing a river which does not overflow
1
Reality Check- Small Scale Continent Geography
13
What are the requirements for a river delta to form?
11
Equatorial oceanic river caused by tides
18
Permanent river of lava