A King, with excess resources asks for two swords to be build; one for ceremonial purposes and one for battle. The first will be used (as implied) for ceremonies and to heighten impressions/intimidating the neighbouring kingdoms. The second will be used for battle, preferably held in two hands but possible with one.

The question here is what design would be used for each sword?

To help answer the question we can assume that the King would want a sword (for ceremonies) that's majestic yet shows off his power, a sword that he would pass down to his son perhaps as a family treasure or symbol of the crown. A lot of the ones I've seen resemble rapiers, though this represents more of the elegant aspect than mighty.

The second sword would ideally be designed for use against any other type of sword, perhaps at the minimum able to exchange at least a single set of blows against an opponent. Design is less of a focus here with more emphasis on practicality.

To further help answer we'll assume that this King lives during the late 15th century in Europe and has brought in the top blacksmiths from all over the world with a wealth of treasure for the one that can design both his swords best for him. This King will spare no expense into the swords as long as they are of a top quality. It's worth adding that the King would have good experience with fighting and combat, perhaps not to the level of the Knights that fight for him but enough to say that he can hold his own well enough.

The BEST weapon to fight knights in the 1500s with is not a sword at all.

The late 15th century was the pinnacle of armor technology. Armor was made so as to deflect stabs from swords, and daggers. Their main weaknesses included weapons such as maces, axes, and pole arms (a lance counts as a pole arm right?) which could cave in the armor. There was also the armor piercing arrows. At this point and time in history I would suggest a ceremonial broadsword (cause they look epic*) and a mace/axe/lance for war.

Also note. Yes, fighting very much depends on skill but good weapons can't hurt can they?

*They probably have the most room for decoration as well. 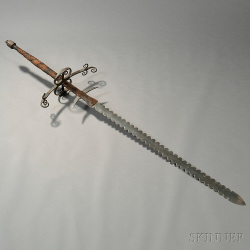 The flamberge is an undulating blade that is found on both long blades and rapiers. When parrying with such a sword, unpleasant vibrations may be transmitted into the attacker's blade. These vibrations cause the blades to slow contact with each other because additional friction is encountered with each wave. Very large blades of the flamberge variety were viable for destroying halberds mid-combat, as an undulating edge causes far more damage when dragged along a tough material than a straight edge.

Ok they're 16th rather than 15th Century, but if you want ornamental they don't get much more impressive and they're also particularly effective in combat.

I know I shouldn't be answering this because it's too broad and opinion based but I really like the flamberge.

2
The Palm Buckler (Blocking With Anterior Arm)
20
Implications of a Lightsaber on the Middle Ages
8
Is it practical to wield a bladed weapon in mouth?
21
For a head of a palace guard (staying mainly inside the palace), is an estoc a realistic weapon of choice?
21
Would being hollow solve the weight problem of giant swords?
70
Is it possible to create a practical sword that's naturally toxic?
11
What are the advantages of a mechanical swordsman? What upgrades would make him superior to a human?
16
Merfolk sword. Would it work?
15
Metal or alloy for special sword