Can a star orbit around a planet? [duplicate]

I have a story where, there's a planet much like our Earth, (only hundreds of times larger than our Earth) is in the middle of their Solar System, and around this planet there's a Sun, which orbits the planet.

When thinking about this I came up with a 2 problems -

The density of the planet is exactly like Earths, if this isn't dense / realistic enough weight could be added, extra iron etc to create a planet with more mass.

Edit - it's not a duplicate as my question isn't about having a planet in the center of the universe.

I would say this is not possible using actual physics.

A planet a hundred times the size of the Earth will NOT be exactly like the Earth. Gravity and mass will increase so much life will simply not be possible.

A star is always much more massive than a planet. A planet about 90 times the mass of Jupiter would have had enough mass to begin fusing hydrogen and ignite, thus becoming a star. So since the lighter objects orbit around the heavier ones, you cannot have a star orbiting a planet...

You can try and make your planet as massive as possible, and your star as light as possible, but event with that I think the barycenter of your two-bodies system would still be inside the star, only giving it a slight wobble. Your planet, however, will still orbit the star.

The only reasonable solution I can see would be if the sun appeared similar to our sun to people on the ground, but was in fact something with far less mass orbiting far closer. No natural entity or phenomenon really seems to fit these criteria, so it would have to be some kind of megastructure. It could be purely artificial, like a moon-sized heat lamp essentially, or you could posit that some advanced technology (magic) allowed the creation of a miniature star, fuelled by some means other than its own mass. Perhaps an extremely handwavey wormhole type arrangement siphoning off plasma from a real star elsewhere and containing it within a field of the appropriate size?

The Earth and Sun orbit around their combined center of mass, the Barycenter. That point happens to be inside the sun because it so much more massive.

If the sun and your planet were the same mass, they'd orbit around a point in the middle.

To reverse the situation and have the Barycenter be near or inside the "planet", your "planet" would need to be hundreds of solar masses and yet not have fusion going. Whatever it would be, it would collapse and turn into a black hole or neutron star.

How about having two suns orbiting around their common center of mass? With the Earth placed right in it.

I imagine that would require some unbelievable balance and a lot of assumptions about how it comes to be, but, at least theoretically, that is something not violating too much physics. As a bonus you get to keep standard Earth mass.

It's probably not very comfortable to live on a planet with no nights, and it's certainly won't be Earth-like planet with that day-night cycle. As a solution you might consider replacing one of the suns with some kind of non-emitting counterweight. Maybe white or black dwarf, which, as far as I know, are pretty heavy and cool, so they may do the trick.

As Cyrus mentioned, the Earth does not orbit around the Sun, but around the centre of mass inside the system. However, all motion is relative the point of reference, so considering that the Earth is fixed, our own Sun revolves around the Earth.

If your solar system contains only one planet and one sun, it's very believable to consider the planet to be the point of reference and the sun to move around the planet, just like humans believed for a time regarding our Earth and Sun.

It is possible, but the planet needs to be massive enough to dwarf the star.

Now, if the planet was truly that massive, it would likely begin to fuse simply as a matter of density, and then it would become a star, which is kind of moot. However, if you had a Ringworld-esque world, that is, a spherical dome structure around a massive stellar body (star, small black hole, neutron star, et cetera), people could live on that as though it were a planet, and a star could orbit it. If you have a star or neutron star on the inside, you'd have to worry about the energy radiating into the ground of the planet.

That, however, leads to further issues. A dome around a massive stellar body would inevitably huge, to the point that the solar radiation from the star wouldn't amount to much proportionate to the planet's surface area.

Reaching the goal of moving the barycentre to within or near the planet might be possible if it's in a stable configuration with lots of other planets: 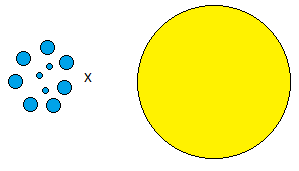 I've no idea if such a combination is possible, though.

You'll need a Dyson sphere that you live on the outside of. Unfortunately, the support structure has to be made of unobtainium. If you have Earth-normal gravity on the surface of something the size of Earth's orbit you can have a star going around it. Note, however, that it takes far more than a day to do so.

8
Could a planet be at the center of the universe, yet still have a sun?
18
What basic principles should I keep in mind when scaling things up and down?
14
Can a habitable planet have mini-suns (i.e. solar satellites or glowing moons)?
3
a habitable planet orbiting a Neutron Star that moves through galaxies

4
What would be the effects of an Earth-like planet with a longer year and longer lunar orbit?
3
Duplicate Earth and Moon, where should I put it?
5
Can this planetary system remain stable?
3
a habitable planet orbiting a Neutron Star that moves through galaxies
6
Making a slow orbit around a large gas giant
30
Can a planet have a day that's always longer than night?
3
Central planet in binary star system?
0
In this binary, how far would the secondary planet orbit the primary planet and still have its own day-night spin?
4
How close can a planet with an elliptical orbit get to another planet?