Working on a world for a fantasy novel. The planet is Earth-like and for all intents and purposes, tidally locked. It has a dark and light side and most human inhabitants live in a verdant twilight realm. It orbits a very large planet, and there are one or more moons made from debris that orbit the small world. I am going to say the moon and the giant provide light on the dark side. I want the giant to be visible from somewhere on the small planet.

My questions are: how to tell time in any way on this world? What would the sky look like in the twilight realm? As you traveled, would you see the light change? How would the giant neighbor planet look as you traveled? It would only be visible on the dark side, correct?

You are right that telling time on a tidally-locked planet is a little tricky. A few comments:

First, here is a simple article about tidally-locked planets if you are interested. http://nautil.us/blog/forget-earth_likewell-first-find-aliens-on-eyeball-planets

Second, beware that the L1, L2 and L3 points are unstable. L4 and L5 are stable (and indeed, Jupiter has large populations of asteroids lurking there) but, in the limit of strong tides (which would lock a planet's spin to its orbit), they are generally unstable on long (billion year) timescales although it depends on the details. Moons are also unstable in the limit of strong tides. If your system is old then the most reasonable bet is a planet on a nearby orbit (see here for details: https://planetplanet.net/2014/05/21/building-the-ultimate-solar-system-part-3-choosing-the-planets-orbits/)

A nearby planet can appear very large. For instance, in the Kepler-36 planetary system, the larger planet appears as big as the full moon viewed from the smaller one when the two planets have their closest approaches.

Third, on a tidally-locked planet the stars move at the same rate as the planet orbits the star. In terms of what the sky would look like, I built up a much more complex system and went through how the sky would change. It should be of some help: https://planetplanet.net/2016/03/23/earth-with-five-suns-in-the-sky-when-would-night-fall/

As a general rule for a satellite tidally locked to the planet, in the short run the orbital period can by anything you want. The Earth's Moon is an example. In the long run, the orbital period of the small planet must equal the length of the larger planet's day, since tidal-locking mechanisms work both ways, although for an Earth/Jupiter type system the long run may be very long indeed. In the case of the Earth/Moon system the difference is driving the Moon outwards at a slow rate. In our case, the Sun is expected to go red giant before the Earth's day gets locked to the Moon, so you don't really need to worry about this for your larger system.

At any rate, if the small planet (technically, a satellite) shows no rotation with respect to the sun, this establishes its orbital period as being the same as the primary. It would probably make sense to use the L1 point (as Hohmannfan pointed out) simply because this would keep the dark side from being too dark and cold. Planets with a face fixed toward its sun will either have ferocious winds carrying hot air (at high altitude) to the dark face and low altitude cold winds carrying the air back to the day side, or the atmosphere will freeze out on the dark side, leaving the rest of the planet airless. You might eventually want to incorporate some magic to keep the satellite from wandering away from the L1 point, since it's not dynamically stable.

If the primary actually has no rotation, it will appear to the satellite to rotate once per year, and this rotation is probably too slow to be useful for telling time on a short (hours or less) scale.

If the primary is a gas giant (which seems probable) it won't have any fixed features, so timekeeping won't be simple even if the primary appears to rotate. You might conceivably claim the primary as a very large rocky body with a thin or no atmosphere, but this also seems like you'd need magic. Natural formation of the satellite would cause the primary to hog the gasses, leaving none for the satellite. 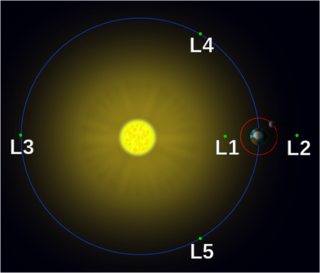 One hemisphere is always facing the star, which is the brightest light in the sky, and exactly 60 degrees away from the sun, a weaker light is the planet, looking like the Moon in its first quarter forever. Astronomers on this world can observe that the distance to the star, the big planet, and between the big planet and the star are exactly equal, forming a triangle. This may cause some strange views on orbital mechanics.

Boring. The planet is hidden behind the star, so the inhabitants of the world may think they are just on a regular planet.

One hemisphere is always illuminated by the star, and the opposite hemisphere by "planet light". What may be visible from the dark side is a small black dot on the big planet, caused by our world blocking some sunlight.

If the big planet has a low density, such as a gas giant, the L2 point lies inside the penumbra, causing an eternal solar eclipse and total darkness.

If the big planet has a higher density, the planet is only blocking some of the light from the star, causing a "ring of fire" in the sky.

Note however that none of these points are actually orbits around the planet, but rather border-case scenarios. The closest one can get to what you describe is having a Moon which orbit is tilted 90 degrees in relation to the orbit of the big planet, and combined with a tidal lock, both the big planet and the star appears to stay almost still in the sky, with the exception of the star making a full revolution for each of the big planet's orbits.

Not the answer you're looking for? Browse other questions tagged planets magic space moons or ask your own question.

4
What would a large and habitable constant twilight zone on a rotating planet look like?