Is a planet with a primarily reddish/pinkish sky a plausible place for humans to live on?

Assuming that the sky isn't that color because of excess pollution, would the makeup of the atmosphere need to change?

And if it were breathable, would the necessary position and color of the sun cause unliveable or drastic temperatures on the planet's surface?

In other words, assuming a world of humans with slightly advanced technology, is this aesthetic choice of sky color scientifically sound?

Yes it is plausible.

You would just need a little more atmosphere is all. The more dense the atmosphere, the less blue light that will be visible on the surface.

A good example is the planet Mars, where dust high in the atmosphere makes the sky appear red during the day and blue at sunset. 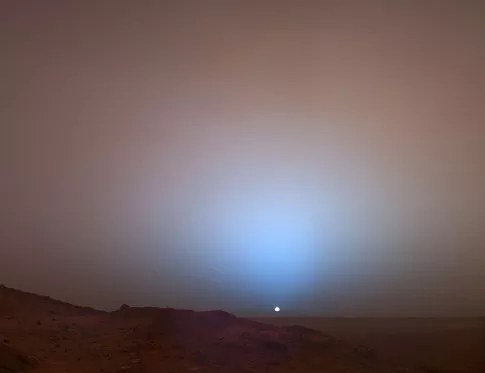 Most "Earth-like" planets may not have blue skies. Most stars are red dwarfs, which emit very little blue light, so even if there is scattering in the atmosphere of an Earth-like planet, there is simply very little blue light available. So, the sky would not be blue. But, of course, one would imagine that any creatures on such a planet would have eyes that were sensitive in the infrared instead of in the visible, since that is where most of the light would be.

10
What are the requirements for an atmosphere retaining moon with a stable orbit around an Earth-like planet with non-destructive tidal forces?
18
Apparent Color of the Sun and Sky
9
How fast would a planet have to be spinning for the centrifugal/centripetal force to cancel out the force of gravity near the equator?
4
Exoplanetary Review: Acid Rain
111
What would make scientists realize they were on a flat world?
13
Would the atmosphere of an alien planet with the following mixture of gases be breathable to humans?
22
Reality Check: Habitable moon around earth-like planet
9
What is the color of Venusian sky 50km from surface
32
Terrestrial Exoplanet Skies – I've Built a Visual Sky Chart. Is it Correct?