What stellar qualities would allow our Sun to support human photosynthesis?

I am interested in a character or race of humanoids similar to the green man in the tent in Wolfe's Book of the New Sun.

What qualities would the Sun need to have in order to support a race of human-like beings that rely mostly on photosynthesis for energy? Let's say they eat some sugar, some minerals, but subsist mostly on water and sunlight. They still move around (although could do so at a much slower pace if need be), manipulate things with their hands, and communicate with others in some way. Maybe they're slightly smaller than a modern human...call a 5'6" man tall for the species.

For our sun specifically, is there a stage in its life such that it would output enough energy for this to be possible? I remember a little bit of photosynthesis from school...plants get NADH from it or something. Is there a plausible way for photosynthesis to generate ATP? What would this sun mean for the environment and mammalian forms of life?

I guess this is a question about both the sun and photosynthesis.

If the sun currently provides 163 W/sq ft to the earth's surface, what if it suddenly produced 1630?

What you're asking for is a 10x increase in luminosity, the total energy the Earth receives from the Sun. As climate change has taught us, the Earth's climate is remarkably fragile to small increases in energy absorption and retention. Increasing it by 10x will do... bad things.

Mercury gets the 10x increase in solar power you're looking for. Even without an atmosphere to hold heat the temperature at the equator in daytime is hot enough to melt lead.

Venus gets a 2x increase in solar energy. It's temperature is complicated by its thick atmosphere, but let's just say it wouldn't be fun for the Earth to get even 2x more solar power.

Is this a feasible scenario within the lifetime of our sun?

Yes, for certain expansive values of "suddenly". Not in your lifetime. Not in humanity's lifetime. Give it another 6 or 7 billion years.

These two images sums up what will happen to the Sun over the next few billion years nicely. 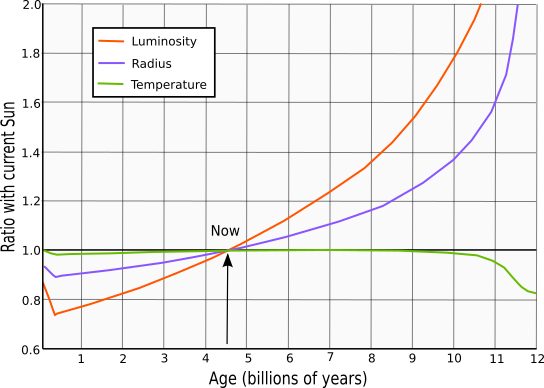 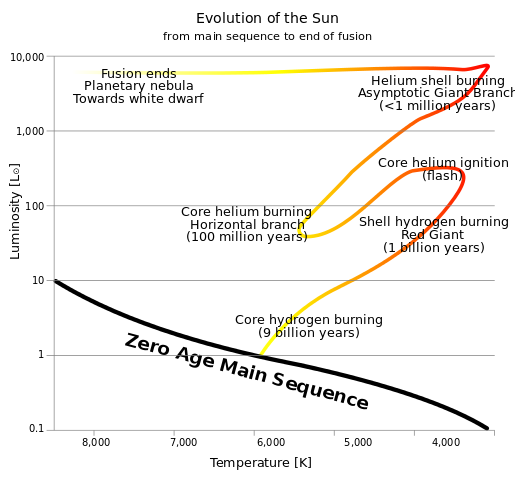 And would that also kill off most mammals?

The optimal excitation energy of the chlorophyll is exactly the same as the solar photons have.

If the Sun radiated differently - for example, it was a red dwarf - then a different molecule would have been evolved for the task.

Whether animals can usefully use photosynthesis is another matter.

While near future genetic engineering technology could add chlorophyll cells to human skin and adapt our liver and metabolism, the real problem is the low amount of energy this generates. For example, consider how a cow gets its energy by eating grass compared to the time and energy required to create that grass through photosynthesis:

So for an animal to use photosynthesis as its primary energy source:

I would also mention that cold-blooded animals require much less energy to survive.

Not the answer you're looking for? Browse other questions tagged science-based biology photosynthesis sunlight .

29
Hydrogenenic Photosynthesis: Strategies for animals
14
Efficiency required of a photosynthetic system to support human level activities
7
Could "soylent" or "body fuel" be mass produced cheaply without the reliance on agriculture?
1
How to build a race which uses photosynthesis?
-2
Power Breaking: Photosynthesis

11
Big Green Men... from Earth
5
What would the flora on a Methane world be like?
11
Could a Neptune like Gas Giant support life?
11
How would the 2016 human scientific community react if a massive space-faring alien "whale" entered the Solar System?
15
What mammalian biological constraints would have to be relaxed/changed in order to allow Victorian style mixing of body parts?
2
Diseases related to 'life energy' in humans
4
How can the Progenitors oxygenate a world?
0
What is the most pratical/feasible method to replace the human digestion apparatus?
3
How should the human digestive system change to be able to go without food for many months?