How long would it take a region to geologically settle down after a major cataclysm?

So in my story/world I have a region that is straight up destroyed...demonic magic is nasty stuff.

So we have rings 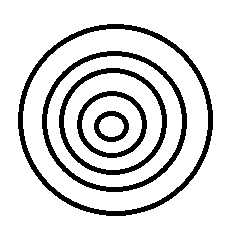 This ring has a diameter of about 200 miles. At this range things got real real bad. The land that was here was completely gone, either ejected into the sky in massive chunks or sunk below the oceans. It is not on the Richter scale at all...

Ring 2 is an additional 100 miles around so the total diameter from the center would be 300 miles. At this range the entire area experienced the equivalent of a 9.0 - 10.0 earthquake per the Richter scale.

Ring 3 adds an additional 50 miles to the radius, for a total of 350 from the epicenter and experienced 8.5 - 9.0 Magnitude quakes

This ring adds another 200 miles for a total range of 550 and its quake measurements registered 6.5 to 8.5

Ring 5 is a more general idea than a specific range. Quakes in this area which doesn't have a specific mileage ranged from 2.0 - 6.5

If my plan doesn't work in the regard, please suggest what ranges/etc could make that work.

How do you render about 31K square miles lethal to visit for 500 years? Good question. This question will ignore the obvious "Well, if you have (demonic) magic, you can do anything." While that's true, it's not super helpful in this case.

Whatever happened in this cataclysm has the effect of inducing monstrous radioactivity in Rings 1 and 2. The half-life of this radiation is such that by 500 years it's just below what a human can stand for days or weeks (though some unlucky individuals will still get cancer. Sorry.) From 500 to 1000 years, the radiation has subsided enough that normal vegetation can start to grow back. Keep in mind that these plants are all from outside Ring 2 since the soil is likely sterilized from the cataclysm. Explorers may see clumps of vegetation before the first 500 years are up. As radiation decreases, more species will be able to survive in Rings 1 and 2. As vegetation spreads, farmers and herders will be able to grow crops and herds on the new land.

The cataclysm broke open the crust, expelling large cracks in the crust that just will not close. While lava itself will cool pretty quickly, 10-15 minutes it can take months or years for deeper lava to completely cool. Let's take this up to 11 then. The cracks in the crust are so immense that it takes hundreds of years for them to finally calm down and solidify. Make sure they don't get around to cooling with frequent eruptions from exploding gas pockets below the hardened lava. Having a river flow into the affected region will provide plenty of water for steam explosions and geysers later. Even after the 500 year mark when everything has cooled down enough to be stable and not cook a human who ventures in, it will take a long time for plants to take hold because there's no dirt, just hard hard basalt.

This is an answer to an earlier version of the question. While the information provided is still valid, it's not as pertinent to the current question constraints.

It's going to take a long time for Ring 1 to cool down after injecting that much energy into such a small area. Given that the diameter of Ring 1 is 2 times the diameter of Chicxulub, as absurd amount of energy has been deposited. I calculated the blast effects of a 100 Teratons of TNT using NukeMap Classic and I got a really silly picture. (I chose Houston, TX because it's on a plain.) 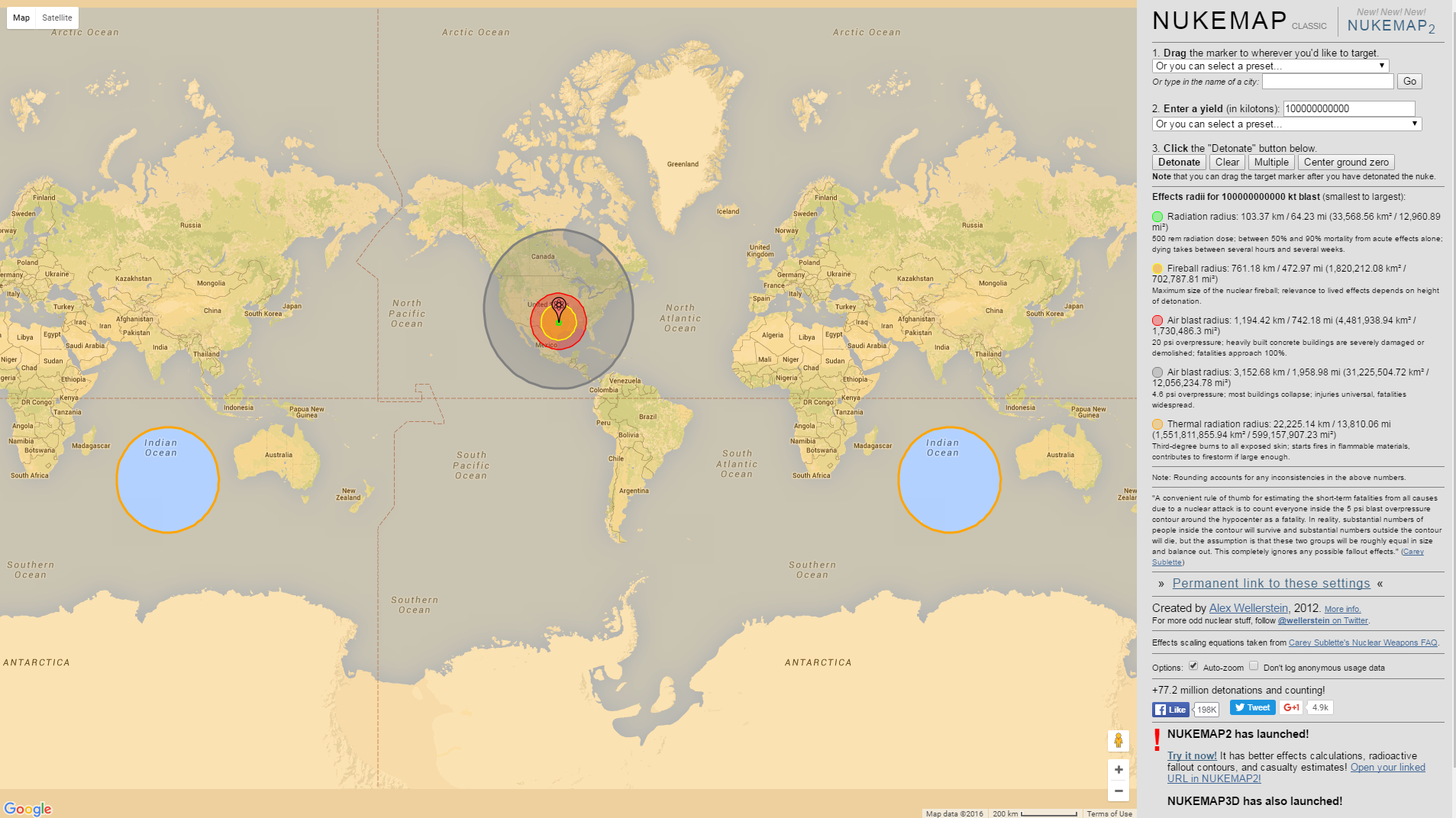 If these kind of thermal effects hold true, it will take thousands or tens of thousands of years for the vegetation to grow back in any ring. Humans generally don't live where there's not vegetation.

If Ring 1 lies on a major fault line then I'd expect significant disruption of that fault leading to long lasting aftershocks. Without more details about the geology under Ring 1, this won't be easy to answer.

In general, aftershocks trail off according to some well understood equations:

where $c$ and $k$ are constants that depend on the earthquake sequence and $p$ which is the decay rate, usually between 0.7 and 1.5. Depending on the values chosen for $c$, $k$ and $p$ fall off of aftershocks could last from just a few days to years. The author has broad discretion here.

Depending on the nature of the demonic magic used, this area may never recover. Most stories treat demonic taint as a kind of permanent pollution that inhibit all but the most twisted of life.

Earthquakes themselves don't last very long. Typically 10 to 30 seconds according to http://quake.utah.edu/regional-info/earthquake-faq

If the quakes aren't happening because of a recurring effect, and the area hasn't been totally destabilized (creating new seismic activity) the area would be pretty much fine geologically.

If there will be aftershocks, though it seems like an unnatural happenstance of quakes, but they can continue for quite a while. They decrease exponentially though.

The seismic activity wouldn't normally occur since it's based on magic, so I would imagine that since the strain isn't due to tectonic movement, it would be fine the next day. It really depends on how it affects the overall seismic activity in the longer term.

That's as much as I understand! :D

I'm no expert though.

One thought (late I know) - what if part of the damage was due to a magically caused mantle plume, such as that which gives rise to basalt flood plains, or volcanic features such as the Galapagos or Hawaiian chains (sorry if my geology is off).

These have the advantage they are ongoing for a time, which would mean the effects could be much closer to the effects you are seeking (long term impact, uninhabitable centre while it lasts or for a few centuries, but rings not too far away which are habitable.)

Ring 1's been destroyed and looks like a land of stalagmites. During the cataclysm, the ground itself exploded, producing this kind of geography in massive rock coated in obsidian. Obsidian is extremely sharp and can last for a very long time. Walking there is like walking in a valley of giant knifes : it is technically possible, but extremely deadly. However, to reach this place, you would have to walk through the Ring 2 for 100 miles ...

Ring 2's geography is also linked to obsidian, but the blades are smaller, so Erosion will act faster. However, nobody really knows how it looks. When the cataclysm happened, huge masses of rocks flew from the impact point and formed a natural wall around it. Some people tried to climb it, but fell or did not come back. It is high enough that a medieval population has no way of bringing it down without heavy siege engines.

Natural erosion and time will create serious breaches in the wall, but not before 500 years.

Part of the local atmosphere has been blown away

A little background on this idea: one of the main risks carried by an atomic bomb is not simply the radiation and the destructive ground power. An atomic bomb could blow the atmosphere around the impact, and possibly in the whole planet.

In your case, the atmosphere has been blown in rings 1 and 2, and has been replaced by a heavy gas which came with the cataclysm (like a non-explosive version of Firedamp or Marsh Gas). If you combine this with the "natural wall" described in the previous idea, or if you assume that the original cataclysm created a large crater, this gas would stagnate and would not allow any lifeform to stay.

Given enough time (500 years ? 1000 years ? It simply depends on how deep the crater/how high the natural wall is), this gas will end up diluting itself, and people will be able to walk there again.