I'm worldbuilding a continent that's mostly desertic (still trying to decide if sand or rocky desert, but definitely a hot desert). All the rain would fall on the edges of it, through a chain of mountain-ranges on all sides. I want said continent to have pockets of population, so I need to know how to distribute the water underground.

How can I draw a realistic network of underground aquifers (or where can I learn how to do it)? How will that translate in oases or locations where people might dig up wells?

The key word you're looking for is Aquifer.

This is water present in underground rock layers. Generally you get an oasis or springs when the water present in layers of rock that water can pass through are funneled to the surface by layers of rock that water cannot pass through. This will usually be in lowland areas relative to nearby hills or mountains, as the water underground still has to flow down with gravity.

You can find a number of maps of these structures online by searching for aquifer maps: 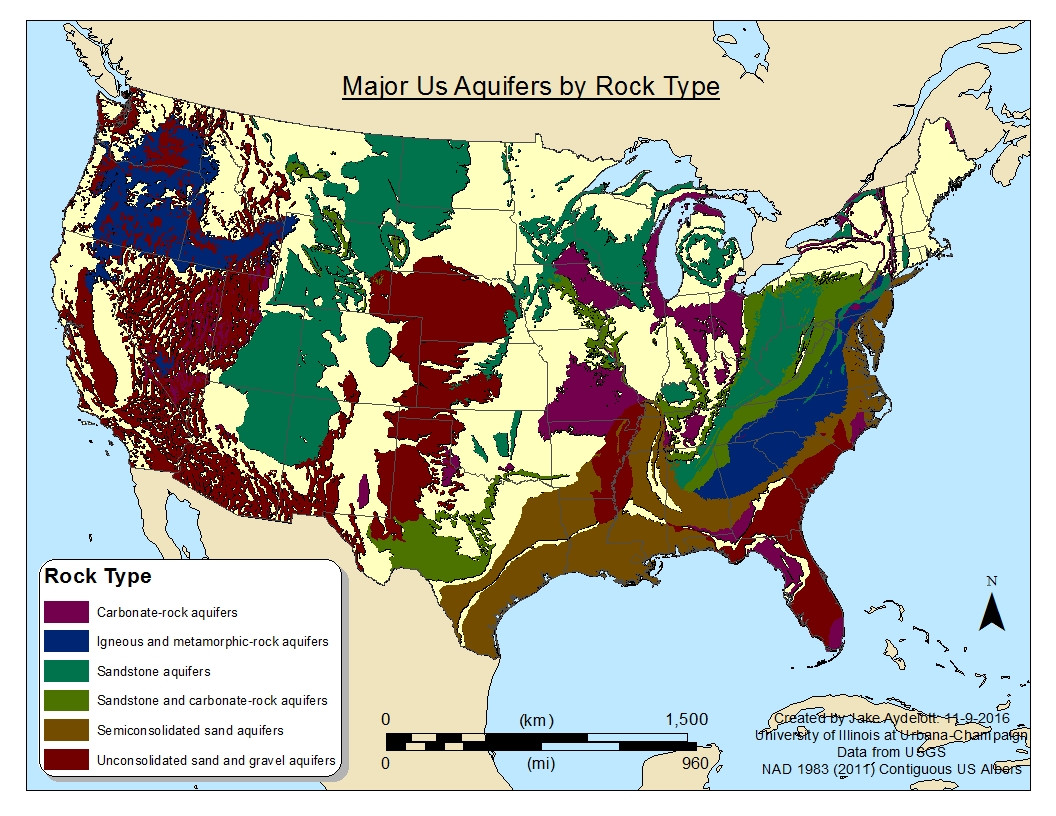 The location of these aquifers depends a great deal on the local geology in the areas; depending on how in depth you want to world build you could construct a detailed local geology or just follow some existing topographical features. For example on the U.S. Aquifer map it is relatively easy to find aquifer contours running adjacent to mountain ranges, plateaus, and coastlines.

On a related note, digging wells isn't the only way to get at underground water, in Earth's desert regions a common un-natural feature for moving water to facilitate human settlement is the qanat. It is basically a tunnel used as an underground irrigation canal, dug to let water flow horizontally out of a hillside aquifer.

I don't know how to draw a realistic network of aquifers, but I do know that such things exist under the Sahara, and are being tapped to produce farms in the desert. So perhaps that may help? You'd probably need to investigate the geology behind what formed such aquifers (or perhaps rather why the Sahara formed over them).

Large fossil water deposits depend on the climate having been different in the geologically recent past. The significant dryland aquifers in the world are not that old. There are broadly two types.

The first type is like the Nubian Sandstone aquifer across the North Sahara, primarily in Libya. The water in this aquifer comes from the Neolithic Subpluvial, also called the 'Green Sahara'. This was a time period from about 7000 BC to 5000 BC. At this time, the Sahara was much smaller and the North Sahara area got signficant winter rainfall, much like the climate farther north in Tunisia or Greece. Since the land is relatively flat, it did not rapidly flow away, but tended to form chains of lakes. These lakes allowed much groundwater to seep into the bedrock. Eventually it pooled underground where the rock layers stopped it and is still here to the present...at least until thirsty humans pump it all out.

The second type is like the Ogalla reservoir in the High Plains. This isn't strictly a desert, but it is semi-arid and doesn't get much rain. The massive reservoir is deposited from water seeping from the many rivers coming off the Rockies. The Missouri, Plattes, Canadian, Arkansas and more rivers come down from Montana to Colorado and flow across the plains to the Mississippi. Their flow rate isn't that high, but it is enough to recharge the aquifer. So in this case, the water level is actively recharging, unlike the Nubian Sandstone.

If you are talking about a very dry desert ringed with mountains, then one of the best examples would be the Tarim basin in China. It too has a large aquifer underneath it, of the Ogalla type. Ringed by high mountains like the Kunlun and Tien Shan, spring snow melts brings water into the basin every year. The water doesn't get very far, but can still be used for irrigation at famous Silk Road outposts like Kashgar or Khotan. What does make it to the desert sands disspaears, partly through evaporation, and partly through seepage into this aquifer. On the other hand, it is worth noting the fact that this particular aquifer is only being found today because it is at depth where where you need an oil rig to get it out. So it wasn't exactly usable to the ancients, who needed to depend on meltwater.

Here are two mechanisms that can produce oasis (is oases the proper plural?):

Underground water forced to the surface at the edge of a mountain range. For example the "Palm Canyon Oasis" in southern california (tried to link, URL length seems to be an issue. You might try feeding that phrase into images.google.com or similar. A beautiful hike, if nothing else.) So, one might have a rain-shadowing mountain range, and along the base of the lee of that range, there could well be a series of precious, potable springs.

Faults can also direct groundwater to the surface (and faults can usefully change, to create/destroy scarce water sources, as quickly as plot requires.

Hot springs?? (Not all of them smell vile. Those associated with carbonate minerals {vs. sulphides} are usually quite pleasant and sought after.)

Not the answer you're looking for? Browse other questions tagged science-based water-bodies deserts rivers or ask your own question.

7
Hamada this place! Plausibility of hamada desert features in a polar region
6
Would a tunnel in sand collapse?
16
A planet with all of its water underground
8
Rocky desert or Sand desert - Which would appear in this scenario?
4
Preparing human colonists for a desert planet with a red giant
8
Could a river on Earth be made of a liquid other than water?
4
Planetary tidal locking causing asymetrical water distribution
3
Where would rivers and lakes make sense on this continent?
4
Are the deserts in this continent realistically placed?