How could a species that sheds its skin make lasting artificial changes to its outer body?

There are many kinds of body modification such as Tattoos, Piercings and scars, but all of these use your skin to work. Many animals in nature though, like snakes, reptiles and spiders often shed their skin. As redoing all of your tattoos or paying to repeirce your new skin would be ridiculous, what forms of body modification would survive a good old shedding of the skin?

we shed our skin too, we do it bit by bit, reptiles do it in one shot, and other animals work in patches. The skin that is removed is just the very superficial layer

When we think about the "skin", the part you shed, we are basically talking that layer called Epidermis which is also composed by layers: underneath the shedding layer you have new skin cells and below that a layer you have the one where cells are active and will divide continuously to form new cells. 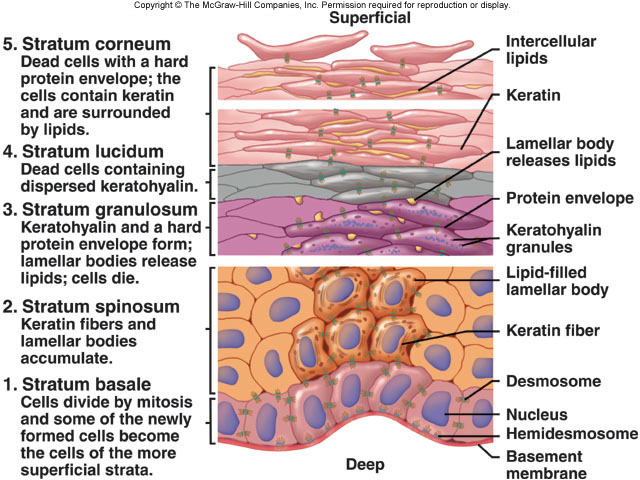 Now, a tattoo has to be deposited at a correct depth for maintenance of the color and appearance. This is the top third of the Dermis layer, in the area that is too deep to be pushed outside basically. With modern equipment the tattoo is deposited at a constant depth, the needle goes straight down and the delivery of the ink is very precise. In the homemade (think jail tats) or older tatoos that used less precise instruments the needle would be a bit all over the place, the depth of the ink at this point is variable and if some is more superficial and is in the basal layer of the epidermis it could be slowly (very slowly) slough off. That is one of the reasons a tattoo might look like "fading" or changing color. Obviously with the less precise method you can also have ink delivered way deeper that will stay even if you actively try to remove it (unless you go at it SonsofAnarchy style).

If you compare an extreme shedding the skin to dermoabrasion you can see right away what could be the extent of "tattoo loss" you can obtain. Before laser dermoabrasion was a way to remove tattoos and some of them are simply too deep for that method. All the other kind of permanent body modifications are even deeper than the tattoos, that's why they are called permanent.

So unless you envision a skin shedding to a depth that is rather extreme, the reality is that its unlikely you will loose all your tats. But its worldbuilding so you can give a little nudge to reality if you really need to.

(Imagine picture of Sir Hiss sporting a tongue stud. Caption: "like my pierssssssing?")

Piercings, brands, and scars. piercings because well it doesnt really have to do with marking the skin as much, branding becasue it makes a permenant marker on your skin, even if a creature would shed, and scars if they are deep enough (and will be healed naturally eventually)

A percing would remain as it doesnt just affect your skin, it pierces your flesh so unless you regrow your muscles as well the hole for the percing will remain.

A scar, unless it is just skin deep, would also remain as a scar is soft tissue. The link explains it quite well that even I could understand most of it. A short version of what they link says is basically; When you recieve and injury (no matter how big or small) it damages the "collagen strands of the fascia" (From what I could gather these are the threads that make up soft tissue) that damaged part of the body will then bind closer parts of the soft tissue to reduce strain, after a resting period the scar tissue should heal but doesnt always. @Erik vanDoren Does a wonderful job of explaining how scaring works below in the comments.

36
How would tattoos fare on reptilian scales?

13
Hair based architecture
0
Pouch skin shedding rate increase?
1
How would a species turn its skin to stone?
2
What kinds of diet/intake changes would be possible for a race with extensive DNA modification abilities?
5
Could an animal have an iris that changes its opacity?
3
Can trolls create chimeras with their renegeration ability?
4
Reality Check: Are these aliens feasible?
11
Synthetic animal with super skin: Looking for Biotic material that's Elastic, hard to cut and puncture with force
3
Can an organism have body structure materials that crumble upon being injured?