How would a secret society/corporation get food to underground bases?

In my story there are two largely unknown secret corporations (on Earth; present day) which are at war. They are quite technologically advanced, although all of their inventions are somewhat feasible. Except for one, which involves an 'aether' (not quite the luminipherous one).

Anyway, one of them has a base about 5 miles under Abbeville, South Carolina. How do they get food to it w/out people noticing? There are about 100 in it.

Edits: The 5 mi. underground is not definite yet. And please ignore the 'corporation' aspect; I mainly used that word because 'secret society' has acquired a sort of specific meaning.

= Suggest your 'Corporation' use some of the, doubtless, sizeable resources at it's disposal to R&D subterrainean environmental and support systems for the long-run. And just plain learn hydroponic farming.

... Guiding BFI(big fat idea): become self-contained, thus limiting odds of vulnerability crop-up, and educated your minions to think better; more resourcefully. it's a brave gnu world after all. ;) Now get off the grid and think outside that box. B4 you can't, anymore, children. (wolfgrin) You'll win that war.

The corporation sets up and runs a completely legitimate supermarket, which provides food for (among all the real customers) several fictitious restaurants. The deliveries are made by a select few employees who are part of the conspiracy. It ought to take no more than one or two delivery puppets to keep 100 people supplied. Plus, of course, the delivery puppets also do regular deliveries as well.

Large unknown corporations will likely be in their position by controlling smaller corporations. Consider how even in the real world, there are ten mega-corporations that are the source of just about everything we eat. If they're becoming powerful enough to actively wage war on each other, they probably act as an umbrella corporation over some of these ten.

Then they fake some data that gets sent to their holdings. Turns out that there's a strain of [insert generic bug like E. Coli] in the [food]! We need to recall all of the [food] shipped out to the stores in the past two weeks!

Recalls happen all the time. Nobody will really care. People pretended to care about the Chipotle health issues earlier this year, but that hasn't stopped many people from eating there. You get a temporary dip in public approval ratings, but your profits aren't affected, especially when you take on the cost of dealing with all of the disposal. The stores will ship the [food] to a disposal location, say, Abbeville, South Carolina, the corporation reimburses them for the shipment, and the [food] is then moved from the trucks into the secret base.

Alternatively: You could just ship the food to the base yourselves. Drive down an interstate highway some time, and count how many big semi-trucks you see. One time as a kid, I counted over three hundred on the road between Milwaukee and Chicago. You can pack a ton of food onto a truck and just ship it to Abbeville, and nobody will think twice of another truck on the road. If anyone asks, just say that you're testing the savings that could be gotten by building a distribution center there. Better yet, actually do build a distribution center there, so that you'll have trucks coming and leaving constantly. As long as nobody is actively measuring how much food comes in and comes out, you can say that you're holding things in storage there and they'll never know the truth.

Hydroponics... create vast hydroponic farms in your underground world. Basically large fish tanks with floating soil. The decay of plant feed the fish, the excrement of fish feed the plants. It's a completely self sustaining farm that reproduces through seeding, etc... oh but everyone will need to embrace the vegetarian lifestyle! Unless of course you just walk a random cow down there every once in a while. A single cow would go unnoticed and would feed a number of people for a LONG time...

Here's my design for your underground base: 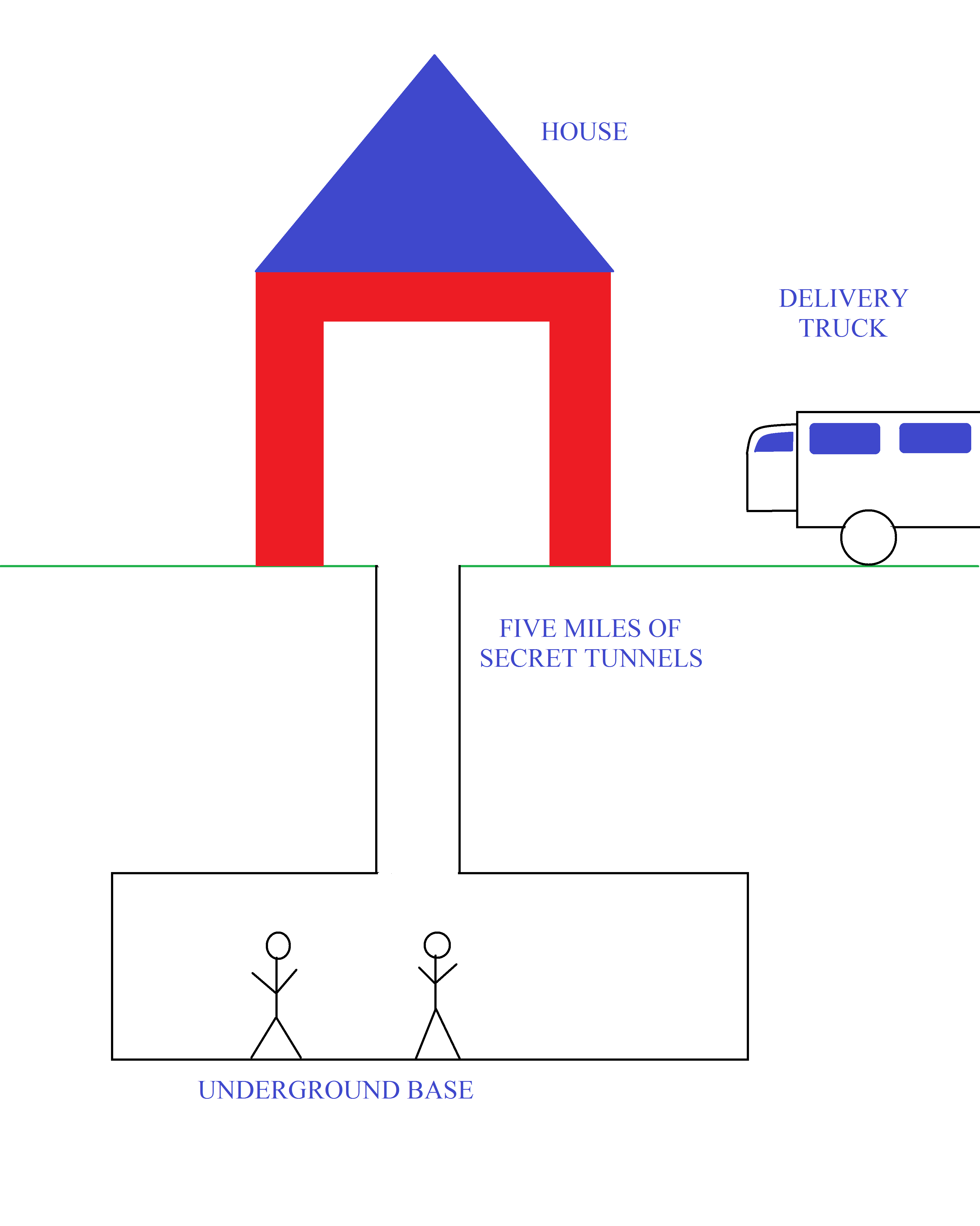 It's pretty simple. Here's what you need:

All you have to do is connect the base to the house. The person who lives in the house will supposedly have a job as some sort of delivery person for a small company - or maybe a construction worker with a creepy white van - and they drive that van to and from work each day. The van, however, carries food - and lots of it.

As a side note, in the Artemis Fowl series, The People ride in egg-like capsules or more graceful shuttles from many miles underground to the surface in magma streams, which lead to exits through unobtrusive natural landmarks. I suppose your corporation could do the same.

Why would they have to transport food? Just produce it underground to begin with. They could do this either "the natural way" with hydroponics, or entirely synthetically. Either way the energy (the only real input you need to make food, assuming sufficient technology) can easily be carried in electrically via high-voltage cables, or could perhaps even be produced underground from underground fossil fuels or nuclear reactors.

A lot of industrial processes use agricultural products as feedstock.

If you need grain? Run a brewery. Siphon off some grain or 'reject' some of the supply, and send it off. Likewise run a cannery for vegitables, and have 'rejected' or 'offcuts' used to supply your needs.

Frozen meat could 'fail' inspections and be 'destroyed', funneling it into your underground lair.

Considering that food is overproduced in many places, a quiet offer to purchase commodities meant to be destroyed at a fair price would likely make many small farmers happy. "Dispose" of it for them 'charging' them for it, while paying them under the table.

Considering the vast amount of food wasted in the US, it should be incredibly easy to organize a few shipments of food for 'disposal', that is really entirely edible and viable food that is rerouted to the secret base.

The secret base could even be underneath the food disposal site. That means that few people will be poking around there, due to it being waste disposal (so it will be in the middle of nowhere), and it will be almost impossible for the entrance to the secret base to be discovered accidentally.

This also would account for any electronic equipment that needs to be shipped there, as the disposal site will probably need at least some industrial machinery. If it just needs more repairs than usual, it can be put down to old terrible equipment that needs frequent repairs.

Your problem isn't food delivery. Food delievery is easy. You simply pay people to deliver food. Nobody inspects food transfers strongly enough that a truck driving food around get's strongly monitored. As long as the driver is on the paycheck of the secred society there's no problem.

That's why actual secret societies like the Mafia or groups like P2 don't have underground bases hidden 5000 meters under ground. That's why other mechanisms for secrecy get used in real life.

You do what everyone else who needs to serve hundreds of meals every day does: You buy the food from food service distributors.

In principle this is pretty easy: You set up a dummy corporation registered somewhere more privacy-conscious than Delaware, and the corporation buys all the food from distributors, the same way restaurants and supermarkets do.

The best part of this is that these transactions are often conducted old-school, offline, with phone calls and occasionally faxes and physical letters, which makes them much more difficult to discover through today's typical "big data" search techniques.

Your society has the technology to build a base 8 kilometers under the surface. And keep people alive. Well an average person uses less then a cubic meter of food and water each year.

Given your societies technology level it would be easy to incorporate a 10*10 shaft of a kilometer long in your base. That is enough storage to feed 100 people for a 1000 years.

What I'm saying is: you don't import food, you build it into your base when constructing it.

Not the answer you're looking for? Browse other questions tagged warfare food .

3
How to cool an underground secret base?

8
Would dragons cook their food?
8
Pros and Cons of Alternative Food Chain Bases
13
How would merfolk store and preserve their food?
41
How would a society isolated by monster attacks get food?
11
How could the Soylent Corporation remain in business after their horrible secret has been revealed?
4
Best hydroponic crops to support an underground society?
8
How would merfolk food presentation look like?