What can we do to Mars to give it a survivable atmosphere?

Some science-fiction books I've read (including more than a few by Ray Bradbury) have men from Earth living on Mars, walking around outside of enclosures. I know that this is currently not realistic, because Mars' atmosphere is too thin to support human life1.

Let's ignore temperature in this question, and just look at oxygen and pressure.

Problems with atmosphere on Mars:

So, my question is: what can we do to Mars to give it a survivable atmosphere?

Could we just add (a lot) more oxygen or something so that we don't have to live on Mars in pods?

In the interest of keeping this question within reasonable limits, let's limit this to current + slightly advanced technology (stuff we don't have yet but is almost certainly possible).

( monetary cost is of no consequence )

1 I googled to find a good source for that assumption of mine, but wasn't expecting a SE result!

Oxygen is easy -- import/manufacture more and fill your atmosphere with it. The hard part will be in getting the atmosphere to begin with; if you can do that, the rest is just details.

But here's the problem with a Martian atmosphere: Gravity. More specifically, Mars doesn't have enough of it.

Martian surface gravity is $3.711\;\mathrm{m/s^2}$; that's only a hair under 38% of Earth's $9.78\;\mathrm{m/s^2}$. If you were to take Earth's entire atmosphere and transplant it onto Mars, it would quite simply weigh less, and you'd end up with a surface pressure of approximately 38 kilopascals (compared to Earth's ~100 kPa)1. At that pressure, water would boil at 75C at the surface (versus 100C here on Earth). So you'd have to keep the A/C cranked pretty high just to keep your oceans from boiling off! I can't speak to the other effects of such a low pressure (you're going to have all the effects of acute "altitude sickness" until you acclimate, if you even can acclimate to an Earth-equivalent altitude of ~25,000 ft...), though it seems to me that that would be extremely uncomfortable, to say the least.

But there's an even bigger problem: Mars doesn't have enough gravity to keep that atmosphere. Mars' low atmospheric density is not merely a random happenstance; gassses have a tendency to float away. This is even true of planetary atmosphere, which can escape into space. Mars is simply physically incapable of sustaining Earth's atmosphere, so your 38 kPa atmosphere is going to get even lower, which will drop your boiling point lower still; eventually you're going to end up right back where you started, with a 600 P surface pressure. (Note that I believe it will take a very, very long time to get back to this point, but you will lose a lot of atmosphere quite quickly, with the losses slowing down as there's less to lose.)

Is there any way to make Mars livable at all? You'd pretty much have to construct a solid bubble, or some kind of protective shell at least, around the planet to stop the outgassing. And probably have to make it a pressure vessel so you can actually artificially pressurize the planet just like you would a spacecraft. If cost is truly no object, this could certainly be done, except that I'm pretty sure it's out of reach of modern science -- I don't think we have materials, let alone construction methods, capable of building something on this scale, even ignoring the airlocks necessary for spacecraft to reach the surface. And the raw materials! Even ignoring how much money you spend, you're going to have a very hard time just getting the materials to build something of this scale! You'd be much better off just building luxurious domes around your Martian colonies: same result, but on a scale that's at least marginally feasible.

Edit: TimB in the comments below points out Venus, which has about 91% of Earth's gravity, yet a surface atmospheric pressure of around 92 times that of Earth (9.2 MPa)! I don't know what allows Venus to hold onto that much atmosphere, however I suspect the reason is that Venus' atmosphere is primarily composed of much heavier elements than Earth's; for example, Earth's atmosphere is nearly 80% nitrogen, which has a molar mass of about 14 g/mol, whereas Venus' is over 96% carbon dioxide with a molar mass over 44 g/mol -- more than 3 times as heavy, and composing 1.2 times as much of the atmosphere!

Which brings up the possibility that if you could find a gas that's safe for humans to breath (and mixes fine with the oxygen) but weighs significantly more than nitrogen, you could potentially solve the problem of obtaining a higher atmospheric pressure by simply creating a heavier atmosphere!

1 There's a significant caveat here, and that's that I could not find any direct corroboration of my assumption that surface pressure would change in direct proportion to surface gravity. However, planets are not pressure vessels; what you feel as "air pressure" is literally the weight of the atmosphere above you being pulled down by gravity onto you. Thus I believe it is a more than reasonable assumption that 38% gravity means 38% air pressure. On the other hand, with less pressure, the gasses will spread out further, which means the outer reaches will get further away and be affected by the inverse-square law; the upshot of this is that my numbers may be too high, making this even worse for plausibility!

Money is no object? How about time?

Simple answer, throw a bunch of [stuff] at Mars.

Send out automated probes to every hunk of free matter in range, and ion-drive it towards impact with Mars; ie: planetoids and comets. First one to bulk up Mars gravity (so you're not wasting your time), and the second to get water down there, which you crack and turn into atmosphere. The hydrogen will escape (like it does here on Earth), and eventually you'll have more free oxygen available.

Problem? You're probably going to make a mess of things. But, since Mars doesn't have a molten core - and you want one of those so you can get a magnetic field - this may be on your path of things that should get done anyways.

You need to make sure you hit it right, so you don't tear off a Moon (like Earth's).

I was playing around with this idea for a while too, and I discovered a very simple solution to creating and retaining a fully pressurized, breathable atmosphere on Mars: Para-terraforming. Rather than converting the entire surface of the planet into an earth like world, you would build capped off "habitable zones" that are covered by a super-durable, transparent ceiling.

For instance, you could create massive cities and landscapes under huge graphene domes. Or you can convert Mars's valleys (like the Valles Marinaris) into lush green belts, while the area around them remains dry, depressurized, and barren like before.

Aside from the airlocks, and the occasional small leak, the atmosphere would remain contained underneath the ceiling. Plus, if it's made out of the right materials, a paraterraformed ceiling could also act as a shield against solar and cosmic rays, further protecting those that live inside them.

The best part is that the faint patterned outline of the ceiling against the sky would look awesome on a sci-fi landscape. Just look: 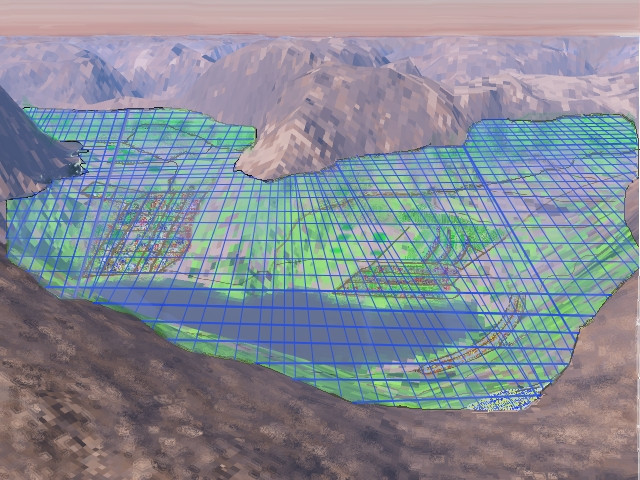 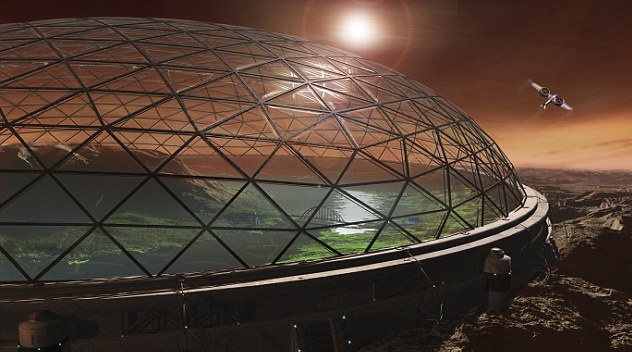 Those others have mentioned that gravity would be required to allow Mars to have a Earth like atmosphere, there is another factor to take into account. The electromagnetic field and solar winds.

For a number of reasons, (size, internal structure, etc.) Mars has a much less dense electromagnetic field than Earth. Without a strong field to slow and deflect solar winds, the atmosphere would be blasted off, even if gravity were enough to otherwise support it.

So if you wanted to terraform Mars, you would need either a physical or EM barrier to keep the sun from blowing your new atmosphere away.

The claims that Mars doesn't have enough gravity to hold a decent atmosphere and that without a magnetic field the solar wind will strip it away are true. BUT they are also not relevant. The time frames necessary to appreciably strip away a newly terraformed Martian atmosphere will be tens of thousands to millions of years. That's plenty of time for a civilization to find ways to either protect the existing atmosphere or to replenish it. The fastest way to raise the atmospheric pressure on mars is to put greenhouse gasses in the air. Chloro fluorocarbons produced from martian soil or manufactured in space might be a good approach. Of course the chemistry and energy needs will be enormous. Also last I heard Mars doesn't have enough volitiles locked in the soil and frozen in the polar caps to make an appreciable atmosphere. Do some research on that before committing to long term terraforming of Mars.

This might not be an exact answer to what your looking for. In the short term, para terraforming, https://en.wikipedia.org/wiki/Terraforming#Paraterraforming seems to be the way to go, but with the conditions on Mars as they are, I believe the safest and longest enduring solution would be to build underground caverns.
This will not only

1) help with preventing the atmosphere generated leaking of into space,

2) but it will also help with the radiation issue that comes with Mars not having a strong and stable electromagnetic field,

3) as well as, depending on your depth, create a more stable temperature due to geothermal gradients. https://en.wikipedia.org/wiki/Geothermal_gradient

4) in addition, subsurface terraformed landscapes will be protected from bolide impacts, which are less likely to burn up in the atmosphere,

5) and the dust storms and high winds that sweep across mars.

The highest proportion of gas in the martian atmosphear seems to be Co2.There for if we could plant fast growing trees such as Laylandi, they would absorb the CO2 and produce O2, ie oxygen. Add hydrogen and you have water. Plant grass and the atmosphear should grow. The gravity problem should be addressed next. Manufacture Micro magnets? How do you increase a planet's gravity?

We already know there is liquid water on Mars. A photo released in error shows a large puddle. How about NASA (Never-A-Strait-Answer!) comes clean and gets the world public behind the project?

Not the answer you're looking for? Browse other questions tagged science-based planets terraforming atmosphere mars .

16
Could there be an atmosphere in which I could both be alive and float?
5
How can I keep an atmosphere on Mars?
8
Breathable Mars?
0
Martian Terraformation

8
Breathable Mars?
11
How do I increase air pressure for the planet Mars?
12
Feasibility of an 'Oxygen Radiation Zone': a non-pressurized natural formation on Mars that provides suitable atmosphere
3
Can planes fly on Mars?
5
Atmosphere of a terraformed 10 km planetoid with Earth gravity
4
How does composition change if you extend an Earthlike atmosphere 50km below sea level?
7
World with low amount of oxygen like Everest dead zone: can people adapt?
10
How could a breathable ultra-high pressure atmosphere form?
9
Can various human-like aliens live together on a space station with a common atmosphere?
2
Is the following rogue planet's atmosphere setup possible?