Is it possible for an herbivore to evolve into a carnivore

In Tarzan the Terrible Edgar Rice Burroughs introduces the Gryf which is a Triceratops that survived extinction and has since evolved to become carnivorous.

It may be possible that ERB believed that the Triceratops has always been a carnivore, but I do not think so.

In any case, is such an evolutionary change remotely feasible?

reality-check evolution
Share
Improve this question
asked May 9 '16 at 17:32

Over a relatively long period of time, yes, it is feasible.

In fact, it most likely happened to our own ancestors. Our far flung ancestors were tree dwellers related to (ancient) chimpanzees. When they eventually descended from the trees and started walking across Africa's vast savannas they discovered that surviving as vegetarian scavengers is pretty tough going - especially when the competition has no such restrictions. They slowly became omnivorous. (this is obviously a trivialized version, please don't spam me with messages about my "ignorance")

"When Jane Goodall first observed wild chimpanzees hunting and eating meat nearly 40 years ago, skeptics suggested that their behavior was aberrant and that the amount of meat eaten was trivial. Today, we know that chimpanzees everywhere eat mainly fruit, but are also predators in their forest ecosystems."

This is due to a simple evolutionary imperative: survival.

When a species limits itself to a certain diet it becomes vulnerable to the availability of that one food source. Should you move too far away from where those plants and fruits grow, you're going to starve. Should some disease or climate change wipe those plants out, you die.

However, if you also eat meat then you always have a high-energy food source to fall back on (assuming you can effectively hunt down some dinner).

And so, yes. If a certain herbivorous species found itself hard pressed for food, it it feasible that it might slowly convert to an omnivorous diet, and eventually maybe even to full-out carnivorous behavior.

However, this evolution might hit certain road-blocks, some of them fatal to the species. The animals in question must be able to hunt down some sort of food, must be able to rip into it, and then process (digest) the meat into useful nutrients. If the animal's digestive tract is 100% geared towards the very efficient processing of plant matter it is far less likely to be able to process meat. Its immune system might also not be able to deal with the various parasites and diseases it might ingest from its prey. There's probably a lot more considerations at play, however dinosaurs lived so long ago, and we know so little about their biology and physiology that you could probably get away with it.

I never suspected that deer, and even cows actually eat meat. The reason for my surprise is that both deer and cows have digestive systems which are highly specialized with the aim of digesting plant matter and extracting as much nutrition from it as possible.

And yet, deer have been seen to feed on dead birds, fish, even other deer. Both deer and cows have been witnessed eating birds.

I found this sort of shocking because we all have this mental picture of deer and cows being benign vegetarian softies, however it makes perfect sense from a survival perspective.

Fun fact: even as late as the early 1900's people did not think that there existed "man-eating fish" (aka sharks). Or, if a shark was found to contain the remains of a man it was believed that the man must have first died in some other way before the shark ate his dead body. Now we know better.

It is actually much easier for an herbivore to become omnivorous and even carnivorous than to develop true herbivory in the first place. Tough plants like grass and stems are very hard to digest effectively and require a complex digestive system to do so, usually requiring a compartment for bacterial fermentation (fruit, which is intended to be eaten by animals, is easier). Digesting meat is comparatively easy and many herbivores, including deer and cows, will eat meat if they find it lying around and it's still fresh. Many deer will even kill and eat rabbits or birds on occasion if they aren't fast enough.

The reason why most herbivores don't eat meat as a regular part of their diet is because animals are harder to catch and kill than plants, and require different kinds of teeth to tear into the meat - but many herbivores are pretty good at running and fighting anyway, since they have to be in order to avoid predators.

An herbivore that becomes more aggressive to protect itself or its territory may frequently find itself nearby freshly-killed animals, and many of those aggressive herbivores will take the opportunity to eat the meat since it's there. Put a little environmental pressure on them, and it's only natural that some of them will start looking for prey to eat until meat becomes a regular part of their diet. As they diversify from their original species, they might forego plant eating altogether and become full carnivores.

Not only can rapid diet evolution happen it already has,
In only a few short decades Italian Wall Lizards changed their diet from a carnivorous diet into that of a herbivore, now I know that this example is a conversion from meat to vegetation, it is explain that by only slowing the rate of digestion it was possible. If we apply this same evolutionary logic then by speeding up the digestive rate a herbivore should be able to change its diet, applying of course that it has no other choice.

In response to AndreiRom's answer (comments can't contain images, so I'll have to elaborate enough to make it an Answer. But first, the reaction): 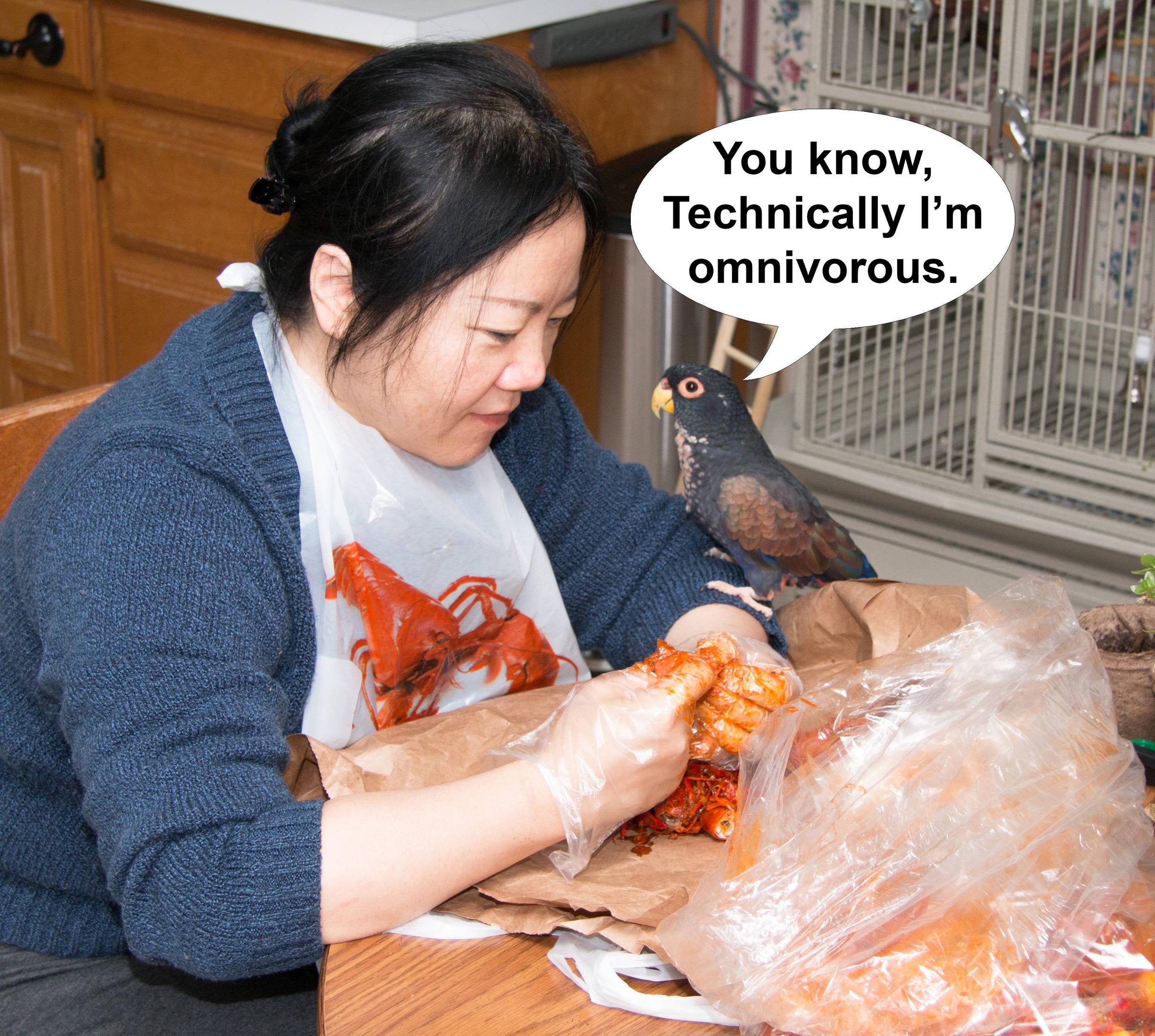 I'm told that Pionus are omnivorous and can digest mostly the same things we can, including cooked meat. Cooking makes food easier to digest, essentially off-loading some of the work that the gut would otherwise have to do. Cooked food is far more "universal", useful even without specialized adaptations for that particular substance.

Some animals have specialized diets and can't live off anything else, or wouldn't consider trying to eat anything else other than (for example) a single species of algae.

But some animals are adaptive and learn about food sources, rather than being hard-wired with the behavior. Hence Diamond's interest in "what she's having", even though it's nothing he's ever seen before: food sources are learned and the instinct is to find new sources and see what works for others and copy that.

Now what kind of animals might survive in a "lost world", initially cut off from its normal food sources and living through changes in the ecosystem? Those that could eat whatever was available, and figure out new sources within an individual's lifetime rather than taking generations to evolve new instincts.

So, any animals you found that survived in a small isolated environment might be expected to have this property.

Note, however, that Diamond does not exactly look like his ancestors from 68 million years ago. Neither would the decendants of the ceretopcid as postulated! Changing the diet and lifestyle will be followed by changes in form.

Note, however, the similarity between triceretops and the modern rhinoceros. They are unrelated, but developed similar forms due to similarity in lifestyle. If you had a present day beast that looked a lot like a ceretopcid, it's as likely to have evolved from something else as to be an unchanged decendant.

So, after millions of years, something that is carnivorous would evolve a form that looks like a dog or cat or bear. Something that evolved into or maintained a form that is a classic herbivore would undoubtedly be an herbivore.

I saw a video of a cow eat up a chick that wandered too close to its grazing. I suppose all animals are omnivorous if they have the capacity to digest something, it is about eating and survival, eat anything you can. Most animals are designed by evolution to find and digest their food, carnivores to hunt, herbivores to avoid becoming prey and to digest vegetation (needs much more processing), which is why you don't usually see cows stalking prey, plenty of grass to go around so far. But by Mr. Evolution if some cows in a population had some slightly better physical ability to stalk prey and the grass all died they would survive better this way and the new population would be more like that, if it continued the population might evolve into bovine lions or die off, out of the gene pool.

Deltochilum valgum fro Peru is a dung beetle that has evolved to eat Millipedes. The papers on this are very well referenced on the web.

A journal paper that can be read free online is

Not the answer you're looking for? Browse other questions tagged reality-check evolution or ask your own question.

17
How would gender roles be affected by a society where parents could control the sex of their child
24
Could an autotrophic civilisation develop, or will evolving life forms always eat each other?
5
Can Humanity use intentional climate change for good?
5
How would lower gravity affect motion?
15
Let's evolve whales and dolphins back onto land
6
Beak to teeth reverse evolution - how would the transitional forms be?
7
Could Bamboos Evolve Into Trees In the Past?
10
Is a gas-mask as a spacesuit possible?
3
Planet enabling societies evolving separately and suddenly comming into contact