I know that on a binary planet you would have planetary eclipses (basically like a solar or lunar eclipse but with planets instead of moons).
If there also is a moon, things would be much more complicated.

With a binary planet and 1 moon you could get:

And with the double eclipses you basically have these factoring in:

But would a lunar eclipse generally be visible from each planet and same for solar or would it vary a lot (taking the moon's path into consideration).

I think it would vary a lot since I think the moon would move in a figure 8 around the planets.

The orbital mechanics of 3 or more bodies are complicated and a lot of research has gone into finding physically possible configurations.

In our own solar system, out in the Kuiper belt, there are many pairs of objects circling each other. Most famous is Pluto and Charon for orbiting around a common center of gravity, but other pairs have been spotted with telescopes. When we recently got close-up photos of Pluto, scientists found several crater-pairs on its surface, evidence that pairing up is common out there. (The Kuiper belt is not so lonely after all!)

The way it works with the moons of Pluto is that Pluto and Charon circle each other in the center and the other moons, namely Styx, Nix, Kerberos and Hydra, circle further out. 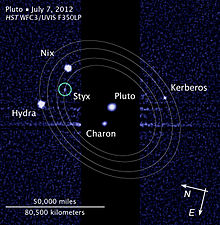 A detail that is relevant to world-building, is that Pluto and Charon are tidally locked. That is, they each face each other with the same side all the time, like how Earth's moon always shows the same face to us:

So much for how the orbits work. Now how about eclipses? For a solar or lunar eclipse here on earth, you need the sun, the earth and the moon to all lie on a straight line. The special cases you describe sound like the case of 4 objects on a straight line. As far as I can see, an observer on the ground would only observe "ordinary" lunar and solar eclipses. The only special thing would be that after observing say, a solar eclipse, the observer could later read in the news that a lunar eclipse had taken place simultaneously on the other side of his planet.

Not the answer you're looking for? Browse other questions tagged planets moons astronomy .

5
At what distance from these planets should this moon be placed?

6
Please help me calculate acceptable planet sizes & eclipse shadows cast by my binary planet system
4
What would it look like for a planet with two moons and rings during a double eclipse?
2
Solar Eclipses on Planet Tidally Locked with Its Moon
21
Would a planet appear to wax and wane as observed from its moon?
6
Does my plot point centered around eclipses make sense?
4
How would eclipses change (both solar and lunar) if the moon was half the distance from the Earth?
2
Stellar/planetary configuration to maximize number of solar eclipses
4
What are the odds of a binary solar eclipse?
0
Various eclipses in a P-type binary star system?