Ask Question
Asked 4 years ago
Active 4 years ago
Viewed 332 times
1
$\begingroup$
Closed. This question needs to be more focused. It is not currently accepting answers.

When it was completed, the 1915 Equitable Building had the largest total floor area in the world. Although it could never claim the title as the world’s tallest building, the skyscraper was nevertheless a behemoth that eclipsed the sun and cast a shadow onto its neighbors. Many New Yorkers feared that the carte blanche held by developers would create a city in which sunlight was a luxury, plunging residents into a macabre world of darkness. The time for intervention was ripe, and the government stepped up to the plate with a novel idea–the first comprehensive zoning resolution in the country.

The 1916 New York City Zoning Resolution imposed height and setback limits and distinguished between residential and industrial districts. Its purpose was clear – to prevent buildings at the scale of the Equitable Building – but figuring out how to implement the resolution was a different story. Architects began navigating how to master the resolution, and with it, usher in a new era in New York City building.

In 1922, architect and delineator Hugh Ferriss was commissioned by Harvey Wiley Corbett to draw a series of step-by-step perspectives demonstrating the consequences and potential of the new 1916 zoning laws. Corbett reinvisioned New York as a marvelous city of skyscrapers. As a result of those initial drawings, Ferriss produced a remarkable book entitled The Metropolis of Tomorrow in 1929. It portrayed how New York City would look in the future and how it would change over the course of the proceeding decades. His vision of the city possesses a beautifully eerie, yet calm feel. The drawings, which eschew a human presence, have a post-apocalyptic quality reminiscent of the city of Fritz Lang’s Metropolis. 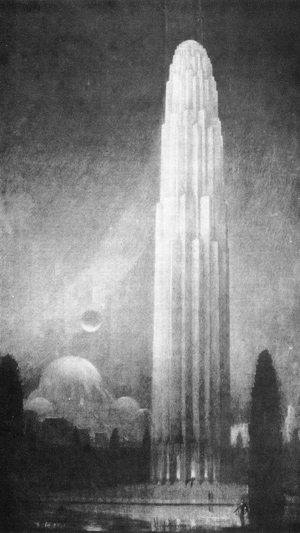 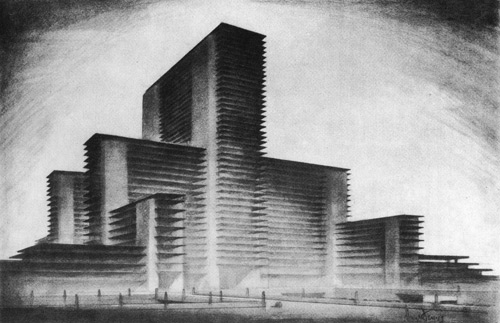 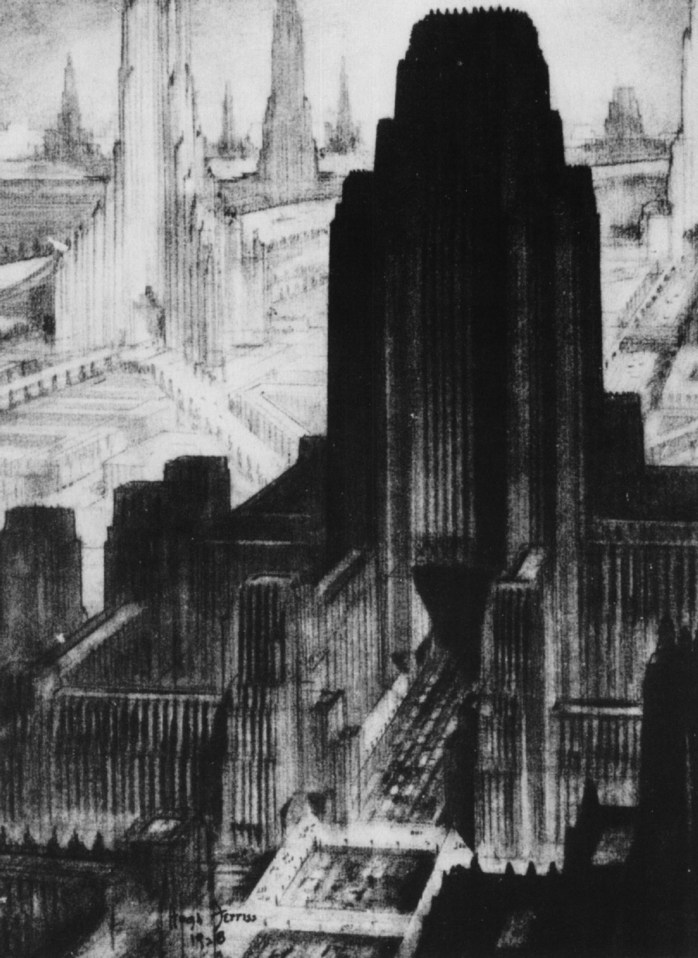 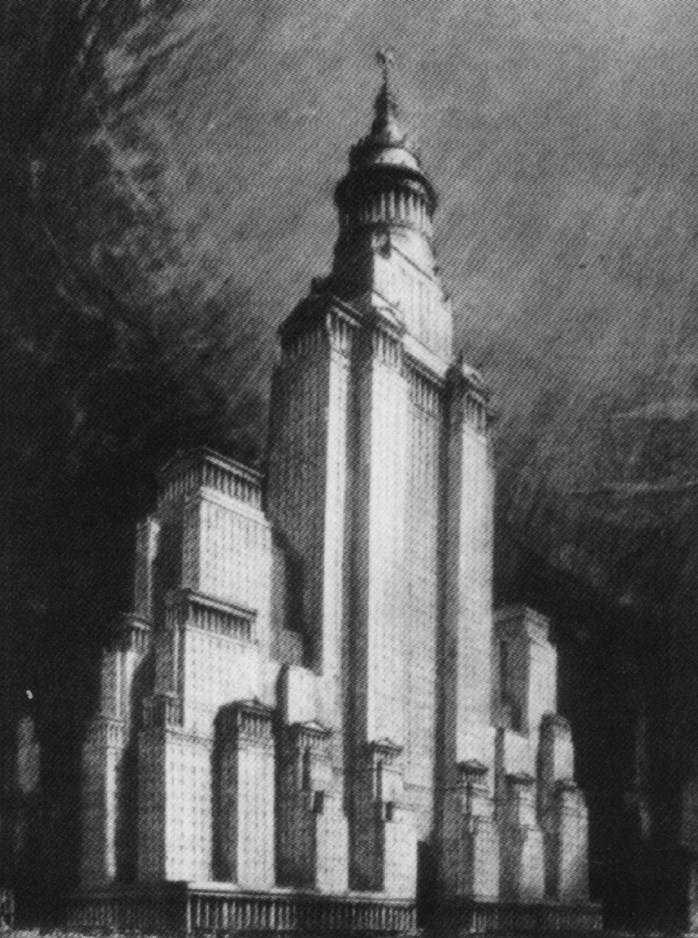 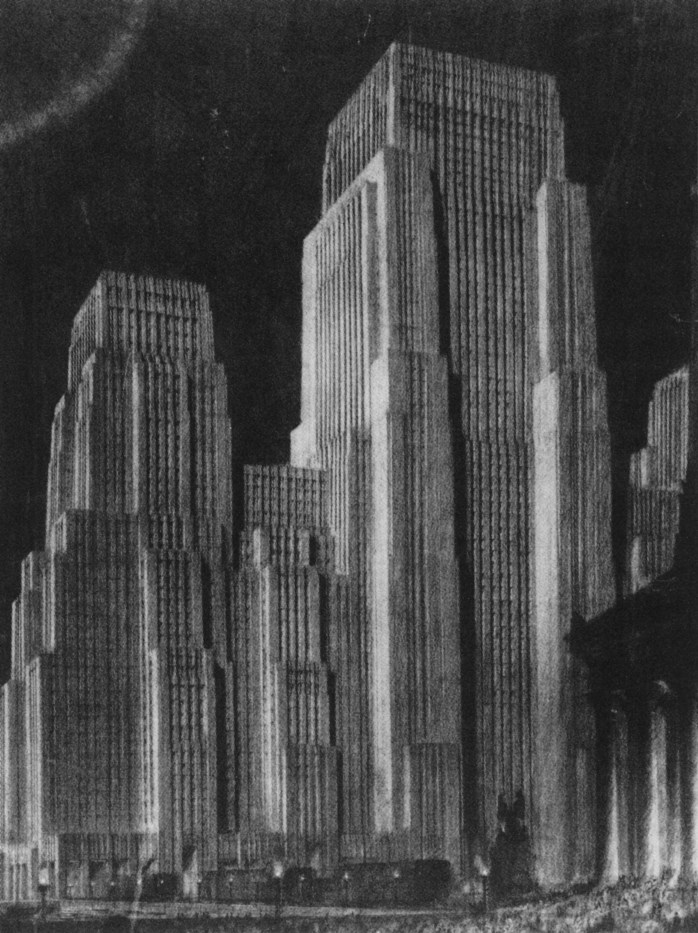 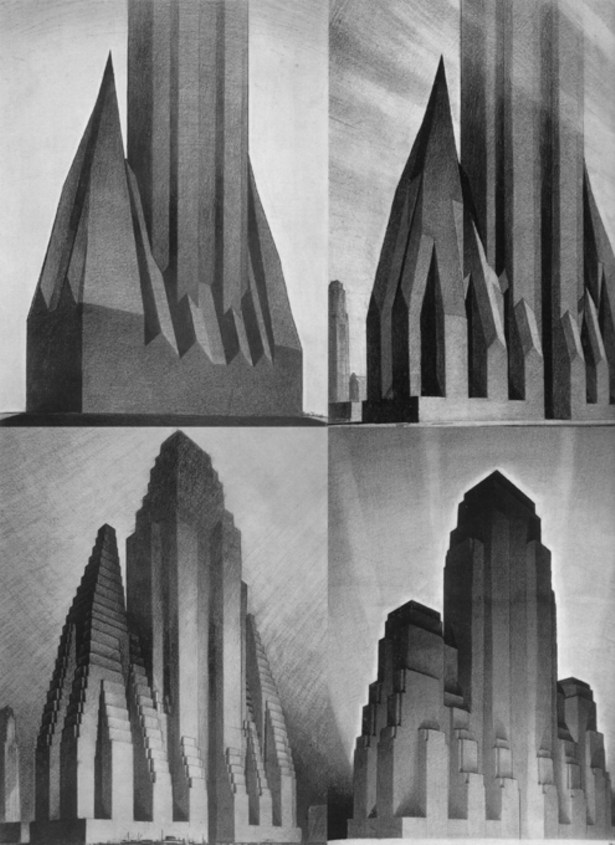 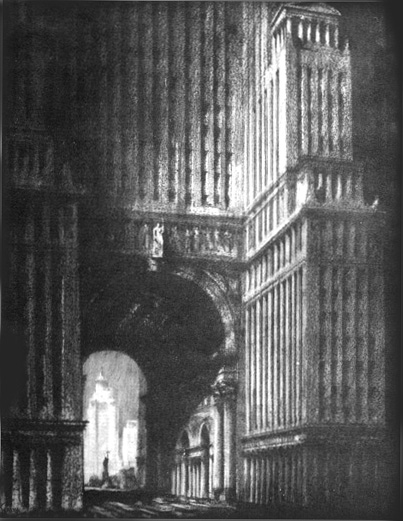 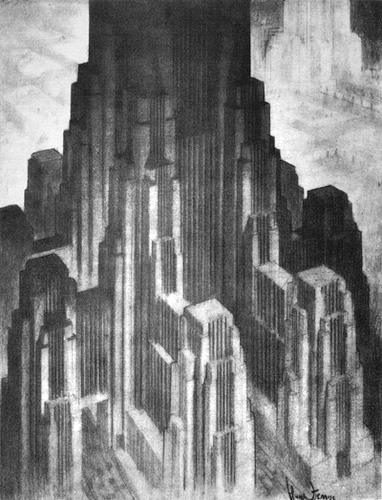 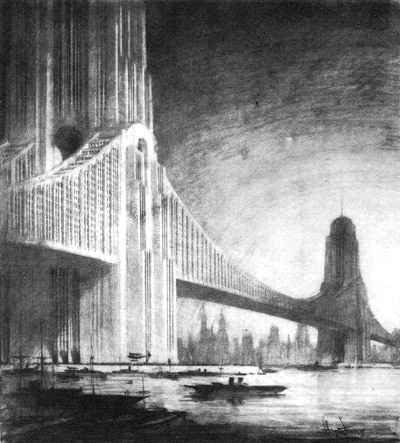 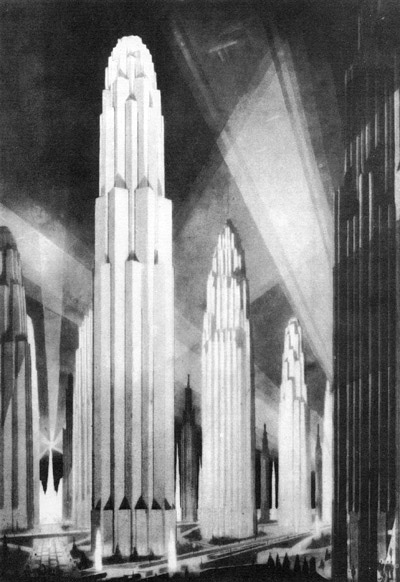 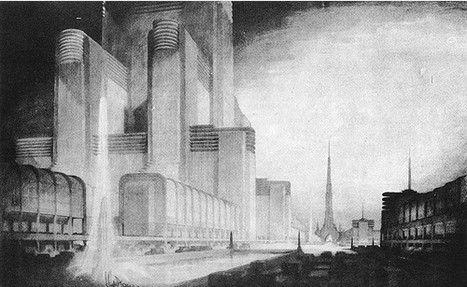 Ferriss’ drawings were produced in an age when architecture was synonymous with vision. Radical social changes resulting from the industrial age led to the belief that if an architect could dream it, it could be built. A lack of imagination was the only impediment to outdoing one’s rivals and the skyline of New York City was reshaped with such vision.

In the end, many of the buildings based on Ferriss’ drawings were never realized. They epitomized a grand vision of New York City that was not firmly codified. As the priorities of urban planners changed, it only became a matter of time before the city’s zoning regulations would be given a fresh start.

In this alternate scenario, Ferriss' drawings DID get off the board and became reality, becoming repeated in other cities after New York--Chicago, Detroit, Omaha, Sioux Falls, Las Vegas, Seattle, Houston, Minneapolis and even Anchorage.

19
What is the likely method of surviving a Tsunami in a city?
4
What would happen if a major city flooded?
3
How long can New York City survive under a Dome?
23
What factors determine how tall the buildings in a city will be?
20
How long would a single metropolis last if all other signs of human civilization vanish?
5
Being aware of highly evolved civilization
6
Weaponising the Tesla earthquake machine or modern equivalent