galactic travel : an alternative to FTL

For a rather hard-science based sci-fi setting, I am checking for faster-than-light (FTL) possibilities. One option that I consider is the following:

Interstellar travel is achieved through portals. They can be imagined during their construction as two giant rings initially superposed. Once finished, they are separated but have a remarkable property : they behave as a "tunnel" in space. Something watching or entering in the space circled by Ring A will see or exit through Ring B. No special effects or anything fancy : both parts of spaces are "simply" connected and behave accordingly. After that, you can move Ring B to anywhere in space, at slower-than light speed. Even if takes a few hundred years to achieve, you can end-up connecting stars or regions of space, building a web of connected portals.

This system makes the portals key elements in my setting (for obvious strategy, communication, and trade/economic advantages) and avoid some FTL. I'd like to have Worldbuilding reader's feedback on this :

Any other remarks on this "pseudo-FTL" scenario are welcome.

For clarification : this is a 2D visual representation of the resulting space-time : 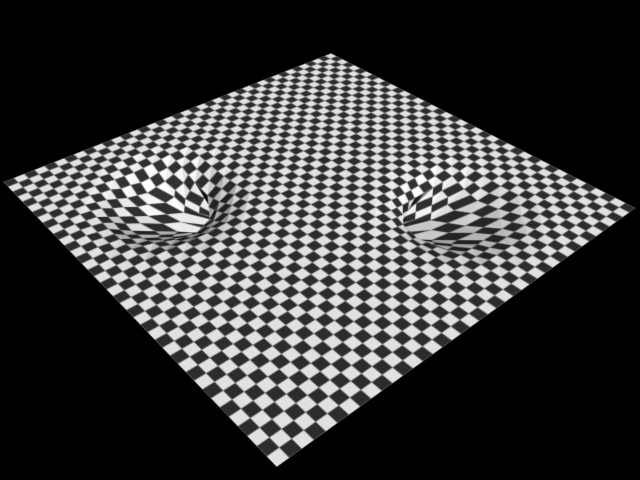 So there is no fancy glowing portal here : simply a permanent connection that is created between two regions of space. This is indeed nearly identical to a wormhole, with the specific characteristic that both endpoints must start in one single point. The initial "pinch/hole" can after that be moved.

Hereunder is the initial unfortunate attempt to connect Earth and Mars, resulting in Earth's atmosphere leakage to Mars. By regulation, next gates were enforced to be located in outer space and limited gravitation/magnetic fields. 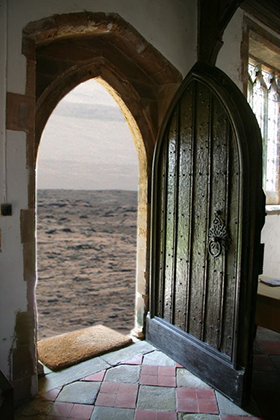 What you're talking about is known as a wormhole, and variations on it are actually pretty common in science fiction (partial list here). The only franchise I can think of off the top of my head that uses the particular version you mentioned is the Galactic Civilizations series of games, but I'm sure that there are many others.

For more information you can look at wikipedia.org and projectrho.com (the latter website being an excellent resource for space travel in general).

This setup has a very slight problem - it forms a perpetual motion machine.

Let's take two portals, A and B. Place A on the ground. Suspend B (oriented horizontally) 10 meters directly above it. Now take a mass M, place it 1 meter above A and let go. Oh yes, and let's put the whole thing a vacuum chamber, shall we?

In effect, the object will experience a constant acceleration of 1 g, and you know that won't end well.

After a day, the energy of the object is about 358 GJ, which gives a velocity of about 846 km/sec.

After a month, if you don't accept relativity the velocity of the object will be 248,000,000 m/sec, which is just a bit shy of the speed of light.

There are some complications with this, most notably the rotation of the earth, which will tend to move the path of the falling body out of the portals, but this is clearly just a matter of engineering. Or, to a first approximation, you just put the portals at either the North or South Poles.

Your suggested method is not an alternative to FTL travel, it is a means of FTL travel. However you do it, if you reach one part of the universe from another faster than light could make the trip, you are indulging in Faster Than Light travel, and you will encounter problems with both Causality and Relativity.

One of the best and most comprehensive explanations of FTL travel and the problems it raises with Causality and Relativity is hosted on this page of Winchell Chung's excellent Atomic Rocket site.

This page also includes a comprehensive catalogue of FTL methods used in science fiction, known as The Canonical List of StarDrives or the Landis list, compiled by author Geoffrey A. Landis. Your postulated method is included on the list as Portal-to-portal.

It's been used in science fiction a number of times, though I don't know off-hand of any rpg settings that use them.

Constellation Games by Leonard Richardson has an multi-species alien civilization visit Earth via just such a wormhole. They send a probe carrying one end of the wormhole at slower-than-light speeds, then send a group of explorers through. They have both one-way and two-way wormholes, and use one-way wormholes for exploration, because sending a million people to visit a primitive society is less disruptive than letting a trillion people have casual access. Edit: I almost forgot to mention it, but an interesting detail is that wormholes have a limited lifespan, measured in the amount of mass they can transfer. This means that a thriving multi-stellar civilization would need continuous production of new wormholes, and a continuous stream of ships carrying endpoints to where they are needed, in order to maintain consistent connectivity. That's the type of detail that would make for a lot of fun gameplay in an RPG.

Glasshouse by Charles Stross has a human society living on the fringes of the solar system and in nearby stellar systems in immense habitats connected by wormholes. They're cheap enough that most people have apartments spread out over all of human space, with individual rooms connected by bi-directional wormholes. Although now that I think about it, Accelerando is really where the wormholes are mentioned more. Glasshouse is more about a group that splits itself off from the rest of the wormhole network after a war; the domestic uses are more clearly seen in Accelerando.

A much earlier book that I recall, though I cannot recall the name, was about a society that used wormholes on Earth to connect up their homes and businesses. I believe the plot was mostly about a child who goes wandering around outside; the child's mother thinks he has a mental problem. Not a very interesting story, really.

The Light of Other Days by Arthur C. Clarke (perhaps in collaboration with someone?) is quite interesting. Here the wormholes start out simply as a means of transmitting information between distant parts of the Earth without any time lag, making everyone's internet connections faster. Eventually they discover that the endpoints can be positioned outside of the equipment that generates it, and so the real story begins. They start out by placing the microscopic endpoint right in front of the eyes of a famous quarterback, to capture exactly what he was seeing when he made the big play, etc. At the end of the book they start using wormholes to scan people's minds just prior to their deaths, with the goal of bringing literally everyone who every lived back to life in reverse the order that they actually died.

I recall another where the inventor of the wormhole was blackmailed, and sent his blackmailer to live for a time on another planet. I thought it was called Gone Fishing, but a quick search doesn't turn it up.

Diaspora by Greg Egan has the descendants of humanity try to build a wormhole and fail. They spent 800 years setting up the experiment to create a wormhole (think of a particle accelerator like the LHC, but the size of the solar system), only to find out that although wormholes exist, they aren't actually shortcuts. All wormholes are as long on the inside as they are on the outside. This is a great book, superb on several levels, so I don't want to spoil it. They do ultimately discover a use for these long wormholes, and it's even more fantastic than short wormholes would have been.

As others have mentioned, if your wormhole endpoints can dial up any other wormhole endpoint then you have Stargate, which is actually quite a fun show. You could have a lot of fun games in that kind of setting.

As for plausibility, no, they're not plausible at all. The mathematics can "work" if you introduce some strange matter with negative mass, but that's precisely the sort of thing that the real laws of physics won't let you have. On the other hand, it would be hard to argue that wormholes are less plausible than FTL, so don't let that stop you. Your readers (or players) will suspend their disbelief of at least one thing in the setting.

Oh yea, and Schlock Mercenary, mentioned in the comments above, is excellent. Very good world-building there, and good stories well told.

I’m not sure I fully understand your concept — I totally do not understand your comments on WhatRoughBeast’s answer — but it sounds like you are talking about a technique that is also known as “matter transmission,” a.k.a. teleportation — like the “teleporter” in Star Trek, but with a terminal at each end.  Like wormholes, this is also common in science fiction.  In particular, I am reminded of The Space Eater, by David Langford, in which humanity develops interstellar matter transmission (but not faster-than-light travel, per se), and then uses it to travel to another solar system, where they pretend that they got there via FTL (see review/plot summary).

If you could somehow create a spacecraft capable of producing 1g acceleration constantly for multiple decades, you could travel to any place in the galaxy within one lifetime without ever exceeding the speed of light. And even some other galaxies are within reach.

What saves you is time dilation. At 1g acceleration you will reach relativistic speeds after one year. As you keep accelerating at 1g the craft will appear to move closer and closer to the speed of light as seen by an outside observer, and time dilation will slow down the aging of the passengers. For the passengers on the craft the entire universe will appear to shrink in their direction of travel, which shortens the journey to an achievable distance.

Once you are halfway there you'll have to start slowing down again.

As a byproduct of accelerating at 1g the entire way, you get artificial gravity of 1g on your craft.

There is a few caveats to this approach:

Not the answer you're looking for? Browse other questions tagged reality-check science-fiction faster-than-light .

11
How would FTL travel appear through window of ship?
1
Quantum Entanglement or other means of FTL Travel
1
tachyonic FTL travel?
8
Can anyone explain this preprint physics paper for FTL travel?
48
How can I justify a Type III civilization using planetary jump drives instead of FTL starships for galactic commerce and travel?
6
Exploiting Time Travel FTL Mechanics to Create FTL Without Time Travel
2
Is it plausible for FTL travel to be made easier to achieve through universal pure axial movement?