How to fight enemy you can't concentrate your eyesight on?

Few weeks ago my wife have bought a dress with crazy texture. (See picture). 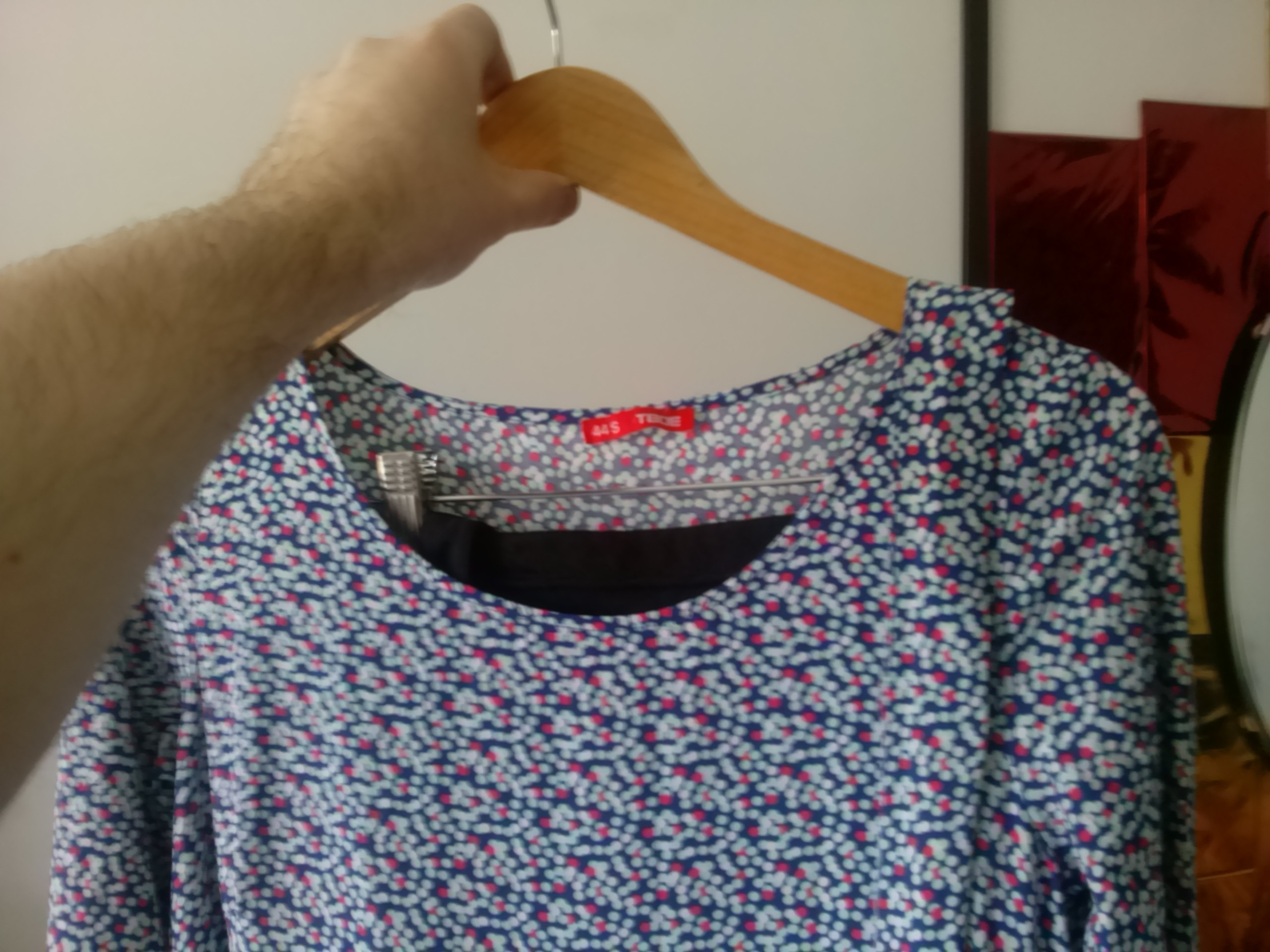 After few minutes watching her in this dress, I have a headache and feel dizzy. I think there is something in it's image's patterns overloading my parts of brain that process visual information.

Consider a situation, when clothes like this are used as camouflage for urban warfare. But they made it more advanced.

The first variant is the sneaky version, that make the observer subconsciously loose focus on target wearing this camo, and observer's opponent can easily blend to environment.

The second variant is active combat camouflage: watching it for few seconds can blurry your vision, disorientate, made vomit. Even if you use binoculars, surveillance cameras, infrared vision, all this image patterns makes you dizzy.

So, consider in 198x years, two armies are fighting each other in urban close quarters combat, they have modern for this time weapons and gadgets - automatic rifles, grenades, tanks, hand-held walkies-talkies, and other stuff.

But one side has this camo.

So, how the other side can deal with it?

UPD1: army, that uses this camouflage, is not affected by it. They have probably spent their childhood wearing these clothes, and are comfortable with looking at textures like this.

UPD2: The story occurs in Europe of 198X years of our world with slight alterations in history that occurred in the beginning of 19th century - there is still the Soviet Union, USA, East and West Germany, France. The technology level is near the same as ours in the 1980s - the IBM XT PC is the dream of hackers, internet = arpanet and bbs boards. So, no Google Glass or high quality augmented reality gadgets.

Army, that use this camo, is the invading one. I do not want to spoil the plot and explain how does it appeared, but they are almost ordinary humans, they use the weapons bought from USSR. They aim to conquer and control few major cities in Europe. It is not the ordinary army, it is some sort of special forces, so the usage of such camouflage was a great surprise to their enemy.

warfare weapons illusion
Share
Improve this question
edited May 8 '16 at 3:18

Only the one that makes you harder to spot would be important.

The second pattern would not work when you have enemy in sight, but you are not focusing on him.

You don't stare at enemy most of time. You take cover once you spot enemy, or shoot him (here it can be inconvenient, but try to look on overall shape, not details, and during sustained shooting everything vibrates so you see blurry anyway), or throw grenade, or call for backup or run away. But you don't just stare at enemy. Only during ambush/scouting you have reason to look at enemy for longer, and training in not directly looking at individual enemy would be pretty simple.

The side without the special clothing would still be able to have direct eye contact with their enemies as night vision reduces and dulls color, thus rendering the clothing useless. Besides, real soldiers today use night vision.

Or since you say that the army with the special clothing is not affected by it, why doesn't the other army without the clothing just take one of the soldiers who are wearing the clothing hostage? If the army has sufficiently advanced scientists, they can capture the genome that makes you immune to looking at the clothing. Now, they simply modify the genes of all newly born babies with the gene extract, so all upcoming soldiers are immune to the clothing.

Option one is basic and used in today battlefields. You see movement there and you do not know what is it? Shoot at the area with machine guns, grenades, artillery shells, airplane bombs, nuke it from orbit. After all, it is not that in modern battlefield the enemy offers a clear target and is not trying to hide themselves in the environment already.

If mankind has morally evolved and for some strange reason unknown today they do actually care for collateral damage, an alternative way would be splash the area of suspected activity with some kind of spray that is harmless but colours the target.

A basic alternative would be a spray that only binds to materials at body temperature; but that only would serve to make targets identifiable and later their status (combatants/non combatants) would need to be verified before engaging.

An advanced alternative would be the spray only binding to clothes designed with such patterns (nanobots maybe?) so they would distinction between combatants and non combatants easier.

Any camouflage that messed with human eyesight enough to make them sick/dizzy would probably affect their own troops just as badly.

You say that these people are "used to it", having been exposed to it as children, but in that case the nation being invaded would have had ample time to find out about this camouflage which is so widespread in their enemy's nation, and started training their own troops to use it.

And here's another thing: camouflage is not meant to make the person looking at you sick. It's meant to hide you from view so that the enemy doesn't know you're there in the first place. What this means is that an enemy soldier looking out over the battle field will start feeling queezy, and immediately know your troops are around. Silly.

So now let's assume I'm the commander who's troops are facing your crazy clown camouflage troopers. The first thing I'd do is bomb the crap out of them - their camouflage won't help them one wit when there's artillery, mortars, and guided bombs falling on them.

Last but not least I would instruct my soldiers to put on sunglasses, or other protective eye wear (or simply IR goggles, as alpedar mentions) which would distort the colors of your camouflage, and render it less useful. Eventually our scientists will find a way to render it completely useless, but in the mean time, we'll deal with it.

The ability to affect what the opponent sees is a powerful ability. Do not be surprised when it is a hard one to overcome.

The key to defeating such techniques is to either prevent them from using it, or learn to work around it. Take the example of the stealthy cammo. In our present day Western world, that cammo makes you a god among men. There are so many places you can go with gear like that that you could likely pull a coup off with just a handful of men vs. the entire world. Just bide your time, and wait for all of your targets to be out in the open at once and, BAM, instant coup.

However, if you blow your surprise, you'll see the high value targets immediately hide behind mantraps, security devices explicitly designed to provide security without conscious thought. They rely on automated forms of identification, and are typically enclosed areas which make it hard for someone to sneak past once a blessed individual opens the door. They often even have pressure sensors in the floor to make sure your cammo wearing soldier doesn't merely waltz in and wait for someone else to open the door.

In reality, techniques like this have limits. If they had no limits, the first nation to reach stealth fighter technology would have owned the world. You are going to have to decide what those limits are, and how to exploit them. Perhaps the cammo wearer dissapears "more" when the target stares at them. People may learn to adapt to fighting out of the corner of their eye, stabbing and shooting at shadows that, if they every actually looked at, would vanish from sight. Or maybe they use other senses: 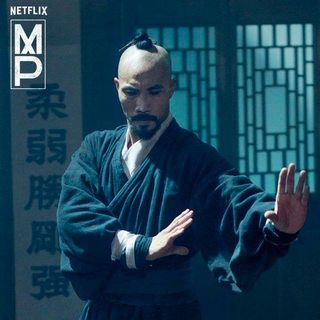 Blind fighting is a thing. Its a technique they teach to learn to use all your senses in combat. I wouldn't say being blind is better than learning to fight seeing, but if seeing isn't helping any, blind fighting may be the answer.

Likewise, you have to decide how you want to deal with your active cammo. The one eternal weakness of active cammo like this is that the enemy knows they're under attack. They may choose to spray bullets in that direction, or respond by napalming the entire forest you came from. Active cammo tends to be used sporadically for key moments, then turned off so that you can move less noticed.

So what weakness do you want your active cammo to have? We have active cammo today, such as the bright green flashing LEDs which have been put on police and military rifles to disorient enemies. It's great for preventing people from looking at you. It's also pretty much a perfect target for any light seeking guided weapon you might develop. In the era you specify, IR missiles are already in use, so it would not be a huge leap to develop ones which home in on such a signal.

Not the answer you're looking for? Browse other questions tagged warfare weapons illusion or ask your own question.

6
How much more dangerous is an enemy that (literally) can't feel pain or fear?
22
How to prevent your enemies from digging under you?
3
How to fight against Lion People?
27
Is conquering your neighbors to fight a greater enemy a valid strategy?
19
How would mesoamericans fight dinosaurs?
2
Would there be any advantage to employ once enemy mercenaries to fight in a medieval war?