What can cause the aliens not to understand our signal?

I am wondering if alien race detecting our signal could actually understand such broadcast. But for my story, I need the aliens being unable to understand what we are broadcasting.

How can I achieve that?

Background about the aliens:

Background about signals from Earth:

Yet, I need them to be unable to understand what is content of such signal. Am I able to make such constraints? How?

technology space aliens
Share
Improve this question
edited May 6, 2016 at 2:35

Like AndreiROM points out, recognizing that there is a signal, and understanding the contents of the signal, are two completely different things.

In fact, it's not even a given that the aliens would recognize some of our transmissions as deliberate transmissions. For an example of this, consider ultra-wideband signalling: very little power, over a huge swath of radio spectrum, with the possibility even of each portion of the signal being below the ambient noise level! I believe some military radio systems work similarly as well, to make eavesdropping on and triangulating the transmitter more difficult. Without the code sequence, it's perfectly possible that you can't even tell there's a transmitter there at all, let alone figure out what is being transmitted.

Our modern communication systems use incredibly complex modulation schemes, in part to get us closer to the theoretical Holy Grail of the Shannon-Hartley theorem. Even if the goals are the same, the odds that an alien civilization would arrive at exactly the same modulation schemes by chance appear sufficiently slim as to be nonexistent, and that's before we even consider the nature of the modulating signal (whatever is fed to the modulator stage, perhaps from a microphone or similar device; in technical parlace, the baseband signal).

Hang on to your antennas, ladies gentlemen and xenomorphs, because over the next several paragraphs, I'll be taking you for a quick tour of the history of how radio has developed on Earth over the past 150 or so orbits of the third planet of the Solar System around its central star.

Radio started out simple, with trivial on/off keying (useful on its own for Morse code, but really not for a whole lot else), and then fairly quickly grew with amplitude modulation which (when viewed in the frequency domain) is a single higher-powered signal at a fixed frequency and two lower-powered signals corresponding to the modulating signal. (What enabled AM was figuring out how to generate a continuous waveform; in the early days of radio, even that was a non-trivial achievement, and besides being a cornerstore for basically every modern radio and wired communications technology, its heritage lives on in how radio amateurs today often refer to Morse code as "CW".) Those two are relatively easy to demodulate (if not necessarily to understand, but by then you are getting into areas like linguistics or transmission systems design), but we pretty much abandoned them a long time ago because they don't fit our current needs very well and we figured out how to do "better". In this context, "better" can mean things like "easier to understand for a layperson with an appropriate receiver", "higher data rate", "greater resilience to transmission errors" or "greater fidelity", with many combining elements of these; compare a noisy, cracking shortwave AM reception to the crystal-clear audio of a FM transmission with an appropriate link budget.

Some time after AM, we figured out how to do frequency modulation, which is basically just a single slab of RF power being shuffled around the radio spectrum. By that point, you can have two radios fully capable of FM on the same frequency and yet not able to communicate! (The transmitter and receiver need to agree on two signal parameters -- deviation and modulating bandwidth -- as these two directly affect the transmitted signal spectrum.)

Not to mention that these days, we don't use these in isolation! No, we have invented beasts like quadrature amplitude modulation (which gives you two different AM signals on a single carrier, each of which can be modulated with either digital or analog data).

Transmission modes can also themselves be layered, like Matryoshka dolls. For example, you can have a FM signal being modulated by a phase modulated or perhaps more commonly an audio frequency shift keyed (AFSK) signal which in turn represents some useful information.

And of course, the signal used to modulate the transmitter is generally not used directly. Many modern systems are digital, which by design places a modulation step between the useful (for example audio, video or data) signal and the radio transmitter. For example, DECT (which is commonly used for wireless phones; however, not cellular phones) uses adaptive differential pulse-coded modulation to create the signal that is used to modulate the radio transmitter, and GSM (second generation mobile telephony) uses what is known as code excited linear prediction coding. Just the names of these should give you pause, and newer standards are even more complex. Add to this the fact that some radio systems are encrypted in (more or less successful) attempts to prevent eavesdropping. Compare this to good old AM, where the transmitter does little more than shift the baseband signal from the microphone into the radio frequency range!

Adding to the above, radio systems often use relatively directional antennas (at least in one plane, and for radio links, directionality in two planes is very often a desired property), so unless your aliens happen to be in the signal path, they might not know that there is a transmitter there at all.

With all of what goes on between you saying "hello" into the cellphone, and the signal reaching even the cellular network base station closest to you, let alone the remote handset, it would be more magic if aliens were able to figure out anything more than that someone just made a radio transmission. Which they would know because the transmitter transmitted several short bursts of radio signals, if and only if they happened to be listening to the right frequency.

In fact, that aliens would understand our signals is unlikely enough that TV Tropes has a whole article on plug-and-play technology (quote behind spoiler tag because, well, TV Tropes):

/.../ Without an agreement for everyone to follow fixed technical standards, computers would not be able to tell their precious 0's and 1's apart from each other in the datastream — compatibility is the exception, not the default. You can't open or shut your closet door by plugging a computer into it, or pick up FM stations on an AM radio. US-made TVs aren't built for the higher voltage levels of European electrical outlets (or the PAL broadcast encoding); you can't play Nintendo GameCube discs on your PS3, you can't run Mac OS executables on the Windows operating system, and the World Wide Web simply would not exist (at least not as we know it) without everyone communicating according to the HTTP technical standard. /.../

This is actually incredibly simple.

Our signals will and do differ significantly from the background noises of the universe - they have patterns. This is in fact the method that SETI is trying to use to differentiate between random "noise" and potential alien transmissions.

And we are constantly broadcasting these signals, so they can certainly use them to hone in on our solar system if they can "hear" us to begin with.

However knowing that the signals are non-random and interpreting them is something completely different. Even our technology needs to know how to interpret a certain signal before it can feed it to a user in a format we might understand.

Aliens would probably be completely lost until presented with a sample of our technology so that they might begin to understand what we are sending them. For example, on their world they may not use our style of visual communications (video signals) because their vision is in a completely different spectrum (IR for example). So they could be interpreting that video signal 100 thousand different ways, and it would still be gibberish to them.

Even if they managed to decipher an audio or video signal they would still need a Rosetta stone which would allow them to actually understand that message.

In person we could point to an object, repeat our word for it, and come to an understanding. However this interaction would be one sided, and they would probably have no idea what's going on until they made contact with us.

It is so hard to understand an alien signal that we, in fact, spent a ton of effort trying to make the Voyager probe plates readable by other species. Even after that effort, they find in a whiteroom test, even another group of engineers/scientists couldn't decypher the plates... and those were humans!

In Orson Scott Card's Ender's Game, the Formics never invented the concept of spoken or written communication. They were telepathic, and so it never occurred to them to use anything else to communicate, or to listen for other people communicating via radio. Presumably they did use the "radio" portions of the EM spectrum for astronomy just as we do, but they didn't have radios as we would call them.

First off, the aliens aren't that far away, relatively speaking. 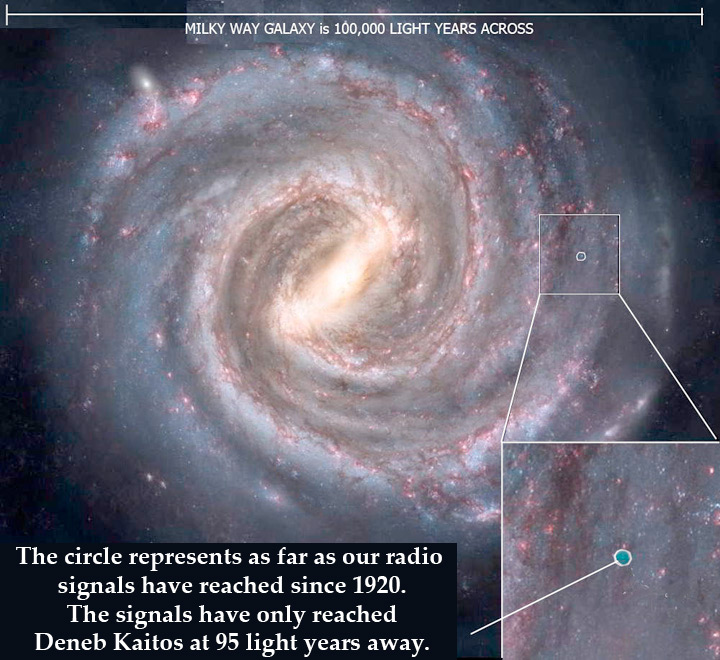 Most of our signals are pretty weak, especially compared to the radio output from our sun, and you'd have to be pretty close and listening very hard to hear them.

Your best bet is an event that actually happened in 1974, where an intentional, very strong broadcast was sent from the Arecibo observatory, and consisted of 1,679 binary digits and lasted three minutes.
If that signal somehow caught someone's attention, then the alien race is within 42 light years of Earth. That might be close enough to possibly pick up some of the strongest radio signals once you know where to look. As AndrieROM pointed out, once you have the signal, differences in biology and culture are going to have a big impact on being able to tell what the message actually says, making it much harder. Which does work out well for you.

Not the answer you're looking for? Browse other questions tagged technology space aliens .

33
Aliens are on their way. What can cause them to not understand us?
60
How far away would an alien civilization need to be for us to not notice them?
3
How feasible is it for authorities to track down a spy from signal leakage of a tightbeam transmission?

4
How are aliens to establish contact with a planet if there are blocs there locked in battle for years?
10
How would aliens recognize communication coming from Earth as communication?
33
Aliens are on their way. What can cause them to not understand us?
4
Is it possible to receive an echo from a radio signal in space?
3
Alien electromagnetic vision
12
How much electromagnetic transmission noise does Earth have to emit to be noticeable?
39
What could prevent us from making alien technology if we had the schematics?
10
How would the ancient aliens leave an instruction manual
5
How many habitable planets could our radio signals reach?