I've come up with a couple of exoplanets for a story, and have reached the limits of my knowledge. I've googled around, and I had a space enthusiast friend look at them, but he freely admits that he's just guessing for most of this, especially the atmospheric makeup.
The other planet is here.

Based on suggestions and additional research, I now have two versions of the planet.

Hekaton (Version 1)
This chthonian planet orbits a BHB blue giant, with an orbital period of 510.8 earth days. Its mass is 14.5 earths, and its radius is 2.1 earths, with a surface gravity of 3.28g. Surface temperatures range from 110 - 180 C, with a mean of 138. Its thick atmosphere has a pressure of 1.85 atms, and is primarily composed of hydrogen,with moderate amounts of helium, and nitrogen, and trace amounts of arsenic, carbon monoxide, and sulfur. It has three moons, with respective radii of 0.13 earths, 0.19 earths, and 0.265 earths.

Its star emits high levels of UV radiation, and despite the thick atmosphere sunlight is very strong, capable of causing 3rd-degree burns in minutes. The combination of high volcanic activity combined with atmospheric turbulence caused by volcanism results in the air being filled with large quantities of rock. Most of this is just grit, but stone rain is not uncommon, ranging in size from gravel to boulders. High winds circle the equator, bringing rock and ash with them. When channeled through mountains or ravines, they become flensing storms that can reach speeds of over 200 kph, leaving huge plains of ash and debris behind them.

A few specific concerns for version 1:

Hekaton (Version 2)
This chthonian planet orbits a blue giant in a tidally-locked orbit at a distance of .6 AU. Its mass is 14.5 earths, and its radius is 2.1 earths, with a surface gravity of 3.28g. Surface temperatures on the hot side range from 1500 - 1900 C, and on the cool side from 60 - 170 C. Its thick atmosphere has a pressure of 1.85 atms, and is primarily composed of hydrogen, with moderate amounts of helium, and trace amounts of sulfur, nitrogen, oxygen, and neon, with large quantities of metals. It is in the process of losing the remainder of its atmosphere. This temperature differential causes enormous atmospheric turbulence, carrying molten rock and metal from the hot side to the cool side to be deposited as rain. Volcanoes further this by pumping large quantities of ash and grit into the air, columns of which scour the surface in great storms. The portions of the cool side near the hot side also receive intense ultraviolet radiation reflected off the atmosphere.

A few specific concerns for version 2:

Planetary System
Its planetary system is relatively old. The inner system is two terrestrial planets (one of them less than 0.1 AU from the star), followed by Hekaton. Beyond Hekaton is an asteroid belt and a gas that has lost a large portion of its atmosphere. Beyond that is a super-Jupiter with over 65 Jupiter-masses that is near the threshold of becoming a brown dwarf. The final planet is an ice giant near the Oort cloud.

How plausible is it that this planet and system could have developed naturally? If it's implausible, what changes would make it more realistic?

My general goal is to create an interesting exoplanet planet that is thoroughly intimidating to biological life but could reasonably be permanently colonized by a robotic civilization with technology that functions best in the -200 - 200 C range, that has access to smart materials, self-repairing buildings, and nanofabrication. Their ideal gravity range is 0g - 2g, but they can function in up to 4g. Colonization would of course be underground.

The important unique aspects of this planet are that it is a chthonian planet with strong UV sunlight and rock storms that will be used for mining. Any suggestions for changes to any other aspects that would make the core aspects more plausible are greatly appreciated.

The radius you have is perfectly fine. It is true that chthonian planets may have masses of 30-100 times that of the Earth, but this is merely because they are extremely dense. Mocquet et al. (2014) put together mass-radius curves for several different compositions, with the lowest one being iron (Fig. 1). They then plotted certain planets on the graph, and found several below the iron line limit. I’ve modified it, adding in your planet: 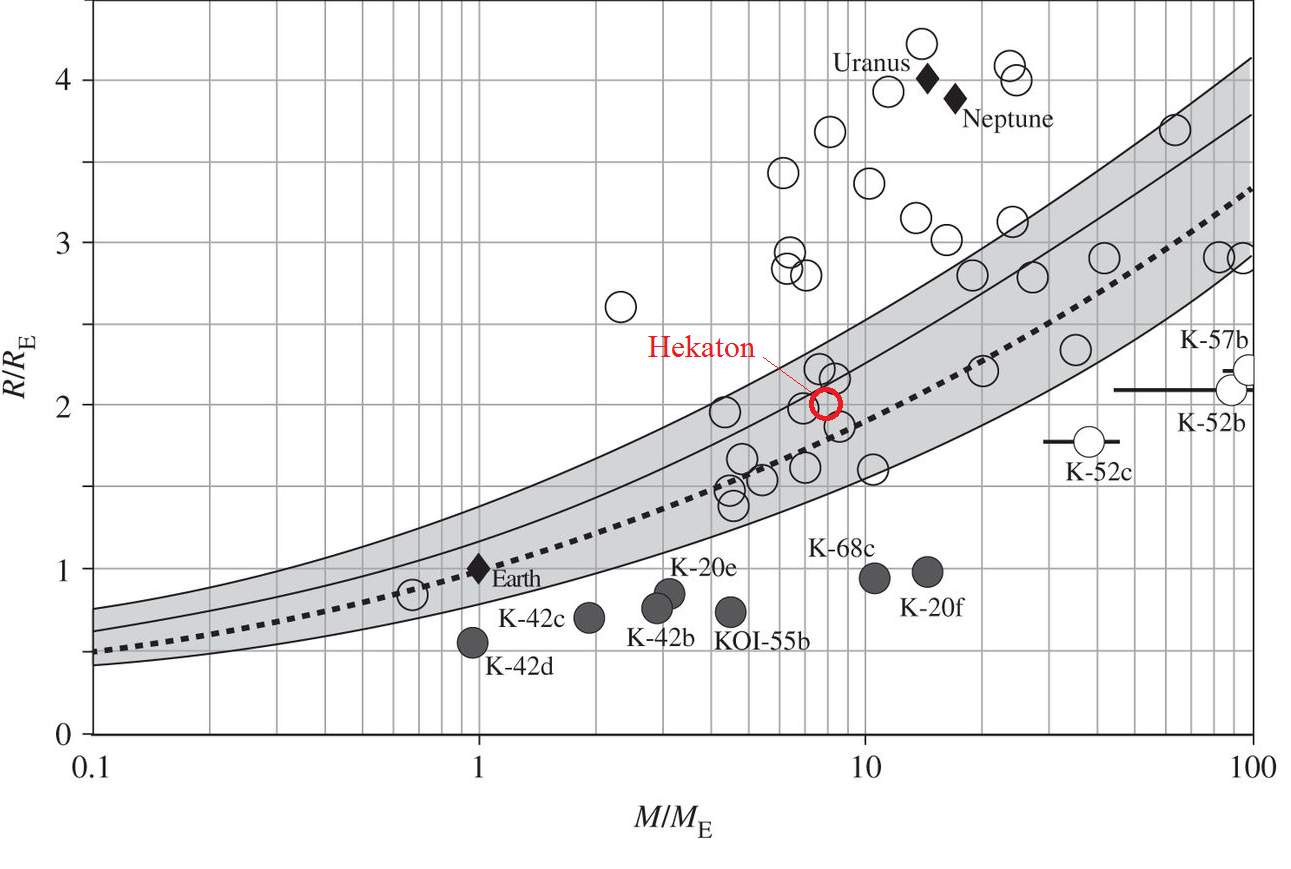 Your planet actually falls on the curve of an ocean planet. It’s nowhere near as dense as most chthonian planets! To be frank, your planet isn’t too small for its mass; it’s way too big. The graph suggests that 1.5 Earth radii would be better.

The models of Seager et al. (2009) support this. I've plotted Hekaton on their Fig. 4, which shows it close to being an ocean planet: 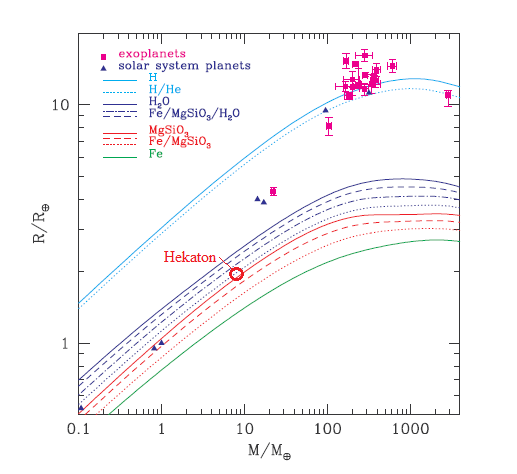 This corresponds to an equation of state characterized by the parameter $n\approx0.513$, which can be used in the authors' mass-radius relation (which I elaborated on here).

I’m going to pass on a discussion of the rock storms; that’s way out of my territory. Hopefully, someone else can give that a good treatment. All I’ll say is that I’m quite confused as to how a planet that’s had its atmosphere stripped away can maintain anything resembling an atmosphere.

We can estimate the temperature of the planet to a decent extent using the formula for effective temperature: $$T=\left( \frac{L(1-a)}{16 \pi \sigma D^2} \right)^{\frac{1}{4}}$$ From a graph here (originally from Heber (2009)), we can conservatively give an estimate of the star’s luminosity of roughly ten times that of the Sun. Converting its orbital period to a semi-major axis (~1.43 AU, assuming a stellar mass of ~2 solar masses), and plugging in an albedo similar to Earth’s, I get a surface temperature of 389 K, or 109° C. That actually fits your temperature range quite nicely. However, the oceans will boil away, so you won’t have an ocean planet left.

That said, the albedo will be different, because the planet will clearly not be Earth-like, so the results could actually be a lot different. Plus, I didn’t account for an atmosphere. I’ve written about the effects of warming through radiative forcing here; take a look if you want to play around a bit.

I suppose you could have planetary migration move the chthonian planet away from the star, but to be frank, it would be hard. You could interact with the terrestrial planets in the inner system, but I would wager that in all likelihood, they’ll be the bodies that are scattered. Gas-disk migration won’t work, because the system is old enough that any disk should have dissipated by the time the planet was stripped of its atmosphere. Your best shot might be to try to use tidal effects to increase the semi-major axis, although as Jackson et al. (2008) found, this should really decrease the semi-major axis, not increase it.

Updates after edits to the question

Your new concerns are quite simple to address. Tidal locking is certainly possible at 0.6 AU, and the timescale is easy to calculate. However, it may take quite some time; many tidally locked planets are much closer to their stars than this new version of Hekaton is.

Additionally, the atmosphere is fine. The planet has a high enough mass that the escape velocity should be about 30 km/s; according to this, conditions are just right to keep a hydrogen envelope, even at the temperatures you're talking about.

With Earth's albedo and greenhouse effect numbers, surface temp will be around 538F or 281C. You say the planet has thick atmosphere and thus high greenhouse effect, but "sunlight is very strong" which means low albedo. That will make the planet even hotter.

You can than use this calculator and play with mass of the star, the distance of the planet, the albedo and greenhouse effect numbers and see what the resulting surface temperature will be.

Detailed info can be found here

I looked at a list of exoplanetary host stars I found on Wikipedia that lists about a third of detected exoplanets (about 600 out of about 2000) and I don't see any around blue giants. That doesn't mean that they don't exist, probably the Kepler telescope (which is responsible for the vast number of exoplanets discovered) is simply not targeting them as they are fairly rare.

I recommend playing around with the mass and size of your planet until it has the gravity you want. To check if you've hit the mark, use the Law of Universal Gravitation. It's not 100% accurate, but for something like a planet it will be accurate to more decimal places then you will ever care about.

Of course, you always have the option of just not caring what physics says and doing whatever you want, but in that case I don't see much point in using exact numbers.

Nevermind, my math was wrong. Doing a correct calculation shows that the Newtonian gravity of your planet is 1.79G.

Not the answer you're looking for? Browse other questions tagged science-based planets physics stars .

31
Is there a theoretical maximum size for rocky planets?
16
How far could a planet be from its star and still be kept habitable by intense greenhouse gases?
4
Exoplanetary Review: Acid Rain

4
Exoplanetary Review: Acid Rain
18
Massive planets around an old blue star
6
Could there be an upside down hurricane on a gaseous super-Earth
8
What's the longest plausible orbital period for a habitable planet with a 3:2 spin-orbit resonance?
2
Effects of severe radiation storms?
3
How can this habitable planet have a moon with a naturally occurring atmosphere?
6
What does a gas giant close to a red dwarf look like?
5
How to Make This Alternate Earth as Black as The Dark Knight
5
Ring of storms around a planet
3
Is this fictional habitable exoplanet of Alpha Centauri A realistic?